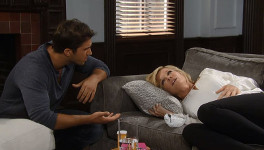 Sonny wants Franco gone before the wedding, when Carly walks in, angry that Michael and Kiki are on their way home and he didn’t tell her. Sonny believes they are now safe. He tells Carly she wants to spend the rest of her life with Franco because she knows he will keep quite about what he did to AJ. Carly insists she loves him…but also can’t risk Michael never forgiving them. Just then, Michael and Kiki walk in. He came back for AJ.

Silas, Franco and “the list”
Silas tells Sabrina he needs to meet with his lawyer to start divorce proceedings, and wants her to book the conference room. Franco is using it to view the video of Carly and Sonny. Franco broadcasts the recording of Carly and Sonny to a large monitor when Silas walks in – he thinks he is watching porn! He offers to cover for him if Franco tells him how long he has been covering for Nina. He asks if Nina has any other secrets? Franco says her brain was scrambled, which is why she made “that list”… Silas finds out the names on the list include him and Sam, Ava and Kiki. Franco tells Silas that Madeline’s name was on the list, but crossed out. Silas decides he will get answers directly from Nina.

Nina and Rosalie
Nina leaves a message for Silas when Rosalie walks in, just to pick up her stuff. She reminds her Silas fired her, but Nina says she needs her and tells her how Travis betrayed her. Nina has a new plan – they will tell Silas it was ALL Rosalie’s fault, and she had no choice but to go along with her devious plan. Rosalie says no, but Nina tells her she doesn’t have a choice – she knows her dirty little secret and will sing like a canary. Rosalie says what if I offer you Ava Jerome? Ever since she saw Ava’s pregnant belly, she has wanted to take the baby and make it her own. She will tell her where to find Ava and the baby.

Ava in pain
Over the phone, Jordan tells Ava the nurse keeps calling her and Ava mentions she is still in pain. Jordan reminds her she took the rap for the accident to save her from Sonny – with any luck, the guy they hit didn’t see anything. Morgan walks in and wants to know who she was talking to – she tells him it was Jordan, but she didn’t tell her where she is staying because of Sonny. Morgan wants to protect her and the baby. Ava collapses in pain. Morgan calls Britt… the pills are making her worse! Britt insists he bring her into the hospital.

Jason remembers voices
In Jason’s room, Brad tells Liz that Britt has moved back in with Nikolas.. and reminds her she lost to Britt a second time. Jason tells him he has said enough… he makes Brad apologize, and says he’s a jackass after he leaves. She tells Jason she and Nik are history, and Britt will find a way to mess it up on her own. She tells Jason she has made her choice and is ready to move on. She asks him is there is anything he remembers about the accident when Jordan walks in – she is sorry for hitting him with the car. But he isn’t sure she was in the car. She asks if he will ever be able to remember anything.. Jason flashes back to hearing a voice that wasn’t Jordan! Sabrina comes in and tells Jordan she urgently needs to speak to her.

Sabrina tells Jordan that Ava has the wrong medication – she made a mistake, the pills could cause premature birth.

Just a dream!
Nikolas brings Britt her breakfast in bed to celebrate their first morning together, then HURLS it at against the wall, yelling he found out she was the same lying bitch she has always been! He can’t believe he swallowed her lies. On his way back from the kitchen, he heard Spencer and Josslyn talking his plan to run away – how it was her idea to manipulate him into taking her back. There is NOTHING to explain.. she used his son and let it go on for days. He picks up the phone and tells the police there is an intruder on the island – he wants her thrown in jail! Britt says she was desperate and didn’t want to lose him – but he wouldn’t give her a second chance. She had to do something… but he will NEVER forgive her. He thought she had changed, but she is incapable of honesty.. because of her, he let the woman he was supposed to be with get away. He lost his chance with to be with Elizabeth. Britt cries and begs him.. he says it’s time he put an end to this. The cops show up and he tells them she orchestrated Spencer’s disappearance and is pressing charges. Britt wakes up, and not knowing what her dream was about, Nik says he isn’t going anywhere!

Michael has come back for a meeting with the hospital board – he wants to open a memorial clinic in AJ’s name. He wants his memory to live on.

Rosalie argues that Michael doesn’t deserve to get hurt and it’s time they started playing by HER rules.

Jason remembers someone standing over him – Liz doesn’t know why Jordan would call 911 and take responsibility if she didn’t do it. They decide to have breakfast together, she goes to get him pancakes. He remembers hearing TWO voices after the accident.

Kiki walks in while Ava is doubled over in pain when Jordan calls – Ava now believes she  is going into labor.

Franco mutters about his wedding present to Carly – he can’t wait to see face. He turns around to see Michael is standing there!This Week Spoilers
Next Week