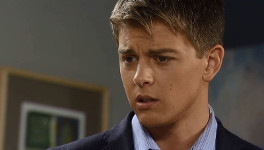 Nina is thrilled Madeline will be helping her steal Ava’s baby – she has waited twenty years. She tells Madeline she knows she is doing it for the money, but doesn’t know where Ava is. Nina tells her that Rosalie knows, but she won’t tell her, they had a falling out – she tells Madeline about asking Ro to sleep with Michael, and now she won’t return her calls. Madeline suggests she might return hers!

Ava and Silas reconnect
Ava is calm on the sofa with Morgan and Silas at her side – they have a heart to heart about Kiki, he wonders why she kept her from him for so long? She tells him they all thought he was guilty of putting Nina in the coma – she thought a love child would make it worse, and was trying to protect him. He tells her she did a great job raising Kiki. She whispers that she loved him so much back then, she would have done anything to hold on to a piece of him. He says he will give her another dose in a couple of hours, she asks if Nina will wonder where he is? He replies that things have changed between him and Nina – she is not the same person he married years ago. He tells her about the list – it’s serious, and it’s good that she doesn’t know where she is. Ava says her nurse does!

Nathan meets Rosalie
Nathan is at Kellys, he asks TJ if he has seen Nina – he runs into Rosalie outside and realizes she is the nurse who worked for Nina. He explains he is worried and needs her help tracking her down. Her phone rings and it’s Madeline.. Nina’s mother! It’s time they had a chat. She wants to meet in person, when Nathan grabs the phone.. mother? She pretends she thought Ro might be able to help them.

Nina wasn’t aware that Rosalie knew Nathan – when Madeline asks why hasn’t she given her up, Nina tells her she threatened to expose her secret. What does she have on her?

Carly wants to leave the Metro Court, but Franco tells her he knows what’s going on between her and Sonny – she argues that seeing Sonny just upsets him, and HE is her priority now. Franco smiles and tells her he can’t wait to give her the wedding she deserves.

Michael needs to see Kiki about Ava!
Michael needs to talk to Kiki about her mother, but not over the phone, he needs to see her now and is coming over. She tells him Morgan is passed out on the sofa, he can’t come over, and rushes out to meet him at the hospital where he tells her Ava might be the one who killed AJ! He explains what he heard from Sabrina – Carlos’ false confession. He wants to know why Ava would force the false confession.. who else would she be protecting? Kiki suggests he was doing that to save face in front of Sabrina, and doesn’t have any proof. Kiki insists it’s not true.. Michael says he needs to talk to Ava, does Kiki know where she is right now? Kiki sputters and says she couldn’t tell him.. she just knows she isn’t at the penthouse, no one knows where she is. He thinks she may have taken off – he understand she wants to protect her mother, but if she killed AJ he needs to call in the police.

Sonny and Shawn hatch their plan
Sonny tells Liv he knows either Franco or Carly will screw up before the wedding, but Olivia knows him better than that. He doesn’t want to talk to Liv about it, but she just wants him to be happy and find someone who will accept his life. Shawn arrives and she tells them both to watch out for Heather… seriously. Sonny explains she just have visions, she doesn’t actually know about their plan to break Heather out of Fern Cliff and pin Franco’s death on her. Shawn tells Sonny that he saw Franco visiting Heather at Fern Cliff, and now that she likes him, it’s going to be tough to pin her for the murder. Should they call the whole thing off? Sonny thinks it’s good that Franco paid Heather a visit.. cops will think he said something to piss her off. He thinks that gives Heather motive.

Franco and Carly at home
Back at home, Franco looks at a tabloid picture of Heather and tells Carly he is planning a wedding surprise for him – a gift. And he had a very important meeting about her.. he ran into Michael at the hospital and they had a chat. He tells her they didn’t talk about Sonny killing AJ, but asked him to be his best man. Carly is surprised he said yes. He did it because it would make her happy, and she is touched. Carly tells him that Bobbie is going to stand up for her – he thinks it’s nice their family will be there, but she says she would hate for Heather to be there. Franco nearly chokes on his drink.

TJ argues with Jordan
Jordan walks into Kellys and TJ is annoyed he hasn’t seen her in a while – she says things have been complicated. With Shawn, he asks..? He knows they have been sleeping together, but she didn’t want him to know in case TJ shut him out as well. It’s over now between them, and he says he isn’t surprised as Shawn is a stand-up guy, and would think twice about getting involved with someone who pushes heroin to kids. Jordan tries to tell him he doesn’t understand – she is not the woman he thinks she is. TJ confronts her about being up to her neck with a bunch of dealers, she say everything has been to protect him, and hopefully he can understand that when it’s all over. She wishes him luck on his test and leaves. Outside, Jordan cries.

Kiki argues it’s gossip, but Michael says they need answers – the cops can get them faster.

Ava tells Morgan about Nina’s anger, but heard his pal Rosalie is no longer helping Nina. He helps her get comfortable on the sofa, and Silas tells her to get some rest before her next shot. She thanks him for doing this for Kiki.

Ro tells Nathan not to worry, he gives her his card and leaves.

Madeline says she knows just how to exploit Rosalie’s secret. She tells Nina she has to leave now and phones Liesl.. she needs to call in a favor.

Michael leaves an urgent message for Anna – he has new info about his father’s murder.

Sonny wonders by Franco was visiting Heather, something is wrong. The wedding will be in 48 hours, by that time Franco should be dead and Heather will be holding the bag.

Franco tells Carly about Olivia’s vision…she saw Heather with a knife. Hearing her name gave her chills. He mutters he will see her tomorrow.

Sonny tells Shawn to get Heather out of Fern Cliff and let him handle the rest.This Week Spoilers
Next Week