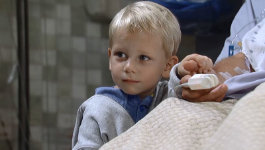 At the hospital, Sam sees Danny holding John Doe’s hand.. Sam looks intently at sleeping the man with the bandaged face, and tells Danny to let go of his hand, but he stubbornly refuses. Liz walks in, and offers Danny a lollipop, and he finally leaves John Doe’s side. She thinks it’s odd Danny wouldn’t let go but says there is something different about this guy, she has a strong connection to him. Sam asks what’s next, and Liz says can release a photo when the bandages come off… Sam asks if he will wake up, then Sam takes his hand…there must be somewhere out there who loves and misses him. She caresses his hand, telling him that Liz will take care of him – she wasn’t to see im get better. All of a sudden, his vital signs are up! A good sign. Liz asks Sam about spending time with Patrick, when the patient’s alarms go off..

Sonny visits Michael with a plan
Sonny pays Michael a visit, and tells him he can’t go to work , he has decided to send him away! Michael reminds him he is not ten years old, but Sonny yells that he doesn’t want to lose him.. Carly walks in, and agrees with his father. Michael is annoyed and says he has a life here – he can’t walk about from ELQ as he is there for AJ. Carly yells that he has to go away until he’s safe, and they suggest he take Kiki with him until things are safe. Michael wants to to set some boundaries, but he knows an attempted hit is big deal, but doesn’t want to worry them – he loves them too much for that. He agrees to go to the island – a “mini vacation” as Sonny calls it. Carly gives him a hug. After he leaves, Carly needs to say something to Sonny.

Kiki worries to Morgan
Kiki arrives home to the brownstone, while Ava stays out of sight. Morgan mentions Maxie was there to apologize for causing problems, and he ended up giving her relationship advice, telling her to trust her heart. He insists their decision to NOT tell Michael that Sonny shot AJ is the right one, when Kiki tells him about the attempt on Michael’s life. And his new gal pal, Rosalie, was there when it all went down. Morgan insists they still need to keep their secret to protect Michael – Kiki is upset, every time she sees him, she is lying to him. Morgan asks if he is going to tell him??

Maxie talks to Nathan
Maxie tells Nathan she has been thinking about him non-stop since they got home, but she can’t go out with him tonight. He tells her they can wait a few days, but she says she can’t go out with him at all. She remembers all the nice things he has done for her, but she can’t jump in to something again. He argues that she knows him, but she says she doesn’t – he insists he doesn’t have hidden motives, but Maxie reminds him his name isn’t Nathan West, and he doesn’t even know the truth about himself. He says if she goes out with him, he can tell her everything there is to know about him – and he wants to know HER. He knows she has been through a lot, but has a proposition for her.

Dante and Lulu skip the adventure
At home, Dante tells Lulu that Tracy is en route to Amsterdam to meet Fluke, and that Sam and Patrick plan to be there when it happens. Lulu still can’t believe her father could do that. He isn’t perfect, but he loves her and has always been there for her. The man they’re accusing of running Patrick’s car off the road is not her father, but she won’t go to Amsterdam. She wants to stay home for Rocco, and doesn’t want to miss another second. This isn’t the time for an adventure. As lead detective, Dante should go to Amsterdam – but asks Lulu if she would be disappointed if he didn’t go? She hugs him, and is very relieved! He can stay on top of things from Port Charles.

Sabrina hears another theory
Patrick runs into Sabrina at the hospital, and mentions she is looking for Sam. He tells her he helped Elizabeth out with her John Doe patient – he isn’t sure if he will be able to wake up, but noticed he’s had brain surgery before. She asks if he learned more about the accident, and he says the person they’re invesigating has nothing to do with Chrichton Clark. He refuses to give her a name, but she feels she has the right to know, so he tells her their theory is Luke Spencer. He explains Spencer’s story – how Luke admitted it – but Sabrina says it’s absurd. She believes the person who did it was after their son, not Emma and Patrick! Patrick needs to uncover more information.. but Sabrina suggest it’s another false lead, she is agitated and he asks if SHE has a theory?

Morgan tells Kiki he doesn’t want to lose Michael, he can never find out – it would change everything. Michael walks in and tells them his parents had other plans for him.

Sonny asks Carly if she is calling off the engagement.. as she knows they should be together?

Nathan tells Maxie he made a reservation at the Metro Court – he understand if she wants to be alone, but if she changes her mind.. she knows where to find him.

Sam and Danny greet Patrick and Sabrina.. and he mentions he told her about Luke.. but decides not to tell them her theory.

Lulu and Dante are happy with their decision to stay home with Rocco.

John Doe’s doctor says he will come around on his own..This Week Spoilers
Next Week