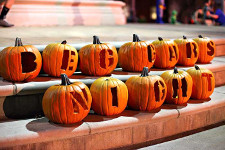 Patrick arrives at Sam’s front door with Emma and Cameron in costume for Beggar’s Night. She tells him she heard from Tracy, and how he returned Lord Ashton instead of Luke. The kids come back with candy, and Emma invites her go with them..

Nathan asks Diane for help
At Kellys, Nathan looks at a photo of Maxi on his phone when Diane arrives, ready to buy him dinner. She is thrilled she beat Scott in court today and notices he is distracted – she finds out it’s because of Maxie. He tells her about their first date when Judge Walters told them he will deny her visitation with Georgie if she continues to see Nathan. Unless Diane can help? Nathan wants to know if this is legal… he and Maxie have been friends for a while, and he misses her. He doesn’t want to hurt her, but is there anything Diane can do to help them be together? Yes, she can file a complaint that he is biased, but if she loses, it could backfire on Maxie. He decides he can’t take the risk. He asks if there is anything they can try, outside of the any option outside of the legal option? She says yes.. gossip has it that the Judge is dating Monica, maybe she can have a word with him? She might be grateful to Maxie for her help during Michael’s trial.

Scotty and Franco bond in bathrobes!
Scotty is planning a romantic evening with Bobbie when Franco arrives – he needs a place to crash as it’s the night before the wedding. The two get comfortable in hotel bathrobes and enjoy a bowl of strawberries together. Scotty tells him about his half-brother Logan.. and how he was stabbed by Lulu in self-defense. He also tells Franco he got his crazy side from his mother.. and thank god she’s locked up in Fern Cliff. Scotty offers to order steaks, and Franco makes a quick call to find out if Heather has been stowed away, nothing can go wrong. Scotty returns and asks who he is calling? Franco said he needs to make sure she is still locked up at Fern Cliff. They don’t need Heather on the loose, free to go after Carly.

Spencer’s new plan with Josslyn
Jossyln arrives at Spencer’s for Beggar’s Night with Maxie and Lucas, and explain it’s the night before Halloween. Spencer thinks it’s “for townies”, and when Nik goes to get some candy, Joss tells him she needs his help. She needs to hide, and he owes her – he reminds her she failed to break up Cam and Emma. Nik returns with a tray of candy, when Sam and Patrick arrive at the front door with Emma and Cam. Spencer mocks Cam, tells them Josslyn is his new girlfriend and they’re going to a wedding together. He thanks them for coming by.. and tells Joss they can pretend to be a couple to get them jealous.

Shawn and Sonny wonder about Franco
Shawn tells Sonny they have a problem, Heather thinks Franco is her warden – it sounds like he was going to bust her out. Sonny wonders why he would want her on the loose right before his wedding day? It’s good they got to her first, they need to keep her under lock and key.. they can move forward with the plan to kill him before the wedding.

Michael meets Jason
At the hospital, Jason struggles with his wheelchair when Michael offers to give him a push. He introduces himself, and Jason observes he’s Carly’s kid – Michael also mentions he suffered a traumatic brain injury. He tells Franco it’s okay to let people help, and they chat about Carly’s upcoming wedding. Michael isn’t sure why she’s marrying Franco, but Jason says it’s obvious they are very close. He tells Jason he was close with his dad, which is it’s important he finds his killer.

Carly gets a call
Carly tells Bobbie that Franco changed the venue to the Haunted Star, and there are many more surprises in store. Bobbie wonders if Lulu needs help, when Carly tells her Jerry Jacks might be holding Luke hostage. Bobbie blames herself and decides to call Lulu. Carly receives a call from Sonny, she asks what he wants? He wants her to know that he loves her.

Spencer is in a good mood, and wants to watch the movie with Nik and Britt – things are actually looking up. Meanwhile Emma asks Cam why Spencer is wasting his time with that corn girl?

Patrick invites Sam to come trick-or-treating with them tomorrow, she declines but invites him to come back for candy. They wish each other Happy Halloween.

Maxie arrives at the diner and sees Diane and Nathan. Nathan tells Maxie there is nothing she can do… Diane says “Om so sorry” and Maxie sadly leaves.

When Michael tells Jason the full story of AJ’s murder, he tells him he should let the police do their job, he’s too close. They shake hands and hope they both find what they’re looking for.

Carly is stunned by Sonny’s declaration – he wants to say goodnight and good luck tomorrow. Carly thanks him and hangs up.

Sonny sits alone in the room.

Over bloody steaks, Scotty reminds Franco that tomorrow is his big day.This Week Spoilers
Next Week