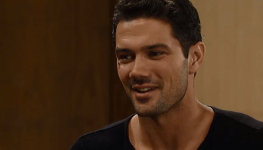 Nathan runs into Dante in Anna’s office, who is there to talk about Luke. Nathan asks if he can help, and Dante tells him they think Julian is taking orders from Lulu’s father. Nathan suggests it could be a conflict of interest and offers to go to Amsterdam in his place – Dante asks what he’s running away from? He tells her about the kiss.

Maxie needs advice
Maxie pays Lulu a visit, and asks if she’s okay as she is holding a photo of Luke. Lulu thinks he might be nursing a broken heart after Tracy dumped him. Maxie says she came over to talk – Levi/Peter ruined her life, and she’s happy he’s dead, and she needs Lulu to tell her she’s not making the biggest mistake of her life! She tells Lulu she’s not going on a date with Nathan, and explains about the kiss they shared at Chrichton-Clark.

Maxie and Nathan both tell Lulu and Dante about the date – he thinks she has made up her mind, and Lulu can’t tell Maxie she has made the right decision! Lulu reminds her she said Nathan was wonderful, and wished she had stayed to get to know him better. Lulu tells her she can’t hide in a corner, but Maxie says it’s way too soon to go out on a date. Lulu tells her Nathan is a great guy, and if she wants to go out with him, she should. Maxie tells her she is there for Lulu when she needs to talk, and leaves.

Dante asks Nathan if he is going to throw in the towel so quickly? He reminds him he’s honest and patient, and needs to honor his commitment to show up at the Metro Court. Nathan thanks Dante for the pep talk, it gave him something to think about.

Samtrick en route to Amsterdam
Sam and Patrick are on the plane bound for Amsterdam, but she is lost in thought – she can’t stop thinking about Danny and Joe Doe in the ICU. He’s normally stand-offish with strangers, but he was so attached to this patient. She asks about his scans, and tells her he has had more than one brain surgeries.. she replies “just like Jason”. She i glad Jason’s operation brought him to town, even thought they didn’t like each other at he beginning! She says he was a “womanizing sexist pig with a god complex”, and he agrees.. but they admit they have both changed a lot! She remembers she forgot to call Alexis to find out what happened with Julian. He tells Sam maybe she’s filing his divorce papers.. it’s almost official, and he’s ready to move on. He tells Sam she doesn’t have to worry about hi kissing her.. the trip is strictly business.

Monica and Liz talk
Liz is with John Doe on her day off, and Monica enters, wanting to see the mystery patient. She was asked to look at him after the spike in his vitals – if he’s waking up, they need to see what kind of shape his heart is in. Monica doesn’t detect any damage. They talk about AJ – Liz says at least they had a second chance and apologizes for the way things ended between them. Monica can’t believe AJ shot Connie, and Liz thinks they got together for the wrong reasons. Liz needed redemption for what she did to Lucky.. and Jason. How she knew Danny was alive, but lied to Jason about it, knowing it would bring him and Sam back together. Monica hugs her.

Franco spies on Carly and Sonny
Franco continues to spy on Sonny, as he asks Carly if she is going to break if off with Franco to be with HIM? Nina interrupts Franco and asks if he is sure he wants to do this, but he keeps watching. Carly tells Sonny that he’s a “son of bitch” – Michael was almost killed because of him, and now they are alone she can tell him what she really thinks of him. She has made her decision, is going to marry Franco, and tells him to get the hell out of here.

Sonny and Carly get passionate!
Sonny tells Carly SHE put him in harm’s way by choosing him to be his father. She knew the kind of man he was, and tells her to admit what it’s really about! He thinks she is trying to convince herself she is doing the right thing, when she’s not. They remember when Michael was shot – he says when the chips are down, they can count on each other. They are stronger together than they are apart. Sonny tells Carly there us something between them, Carly says it will be a disaster, and he whispers “a beautiful one”. She tenderly kisses him and starts take his jacket off..

Dante returns home to Lulu, and they talk about Nathan and Maxie.

Nathan continues to wait at the Metro Court – he is just about to leave, when Maxie shows up in a beautiful red dress!

Franco and Nina return to the hospital, and asks for his phone back. He tells her he is going to delete the camera app, but sees Carly telling a shirtless Sonny she’s not ok – she spent the afternoon having sex with him, and her fiance has no idea!

Patrick wakes up a sleeping Sam, as their plane lands in Amsterdam.

Liz is about to leave John Doe’s side, when he opens his eyes!This Week Spoilers
Next Week