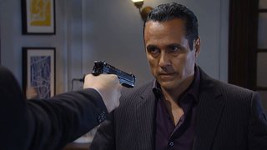 Michael points the gun at Sonny.. “you are guilty as sin”. He wants to put him in the ground and send him straight to hell. Sonny says he doesn’t blame him, this is his penance.. he gets that Michael has to honor AJ, just know that he loves him, no matter what. Michael is about to shoot when Dante and Morgan arrive – “don’t do it!”. They gently tell him to put the gun down, but Michael says Sonny is okay with it, he is just playing by the rules. A life for a life.. he murdered his father and lied to him over and over. Dante says if he wants to kill him, he will have to do it with his brothers as witnesses. He shows Michael the arrest warrant, this time Sonny is going down. Michael says the only way AJ gets justice is if he dies, when Morgan steps in front of Sonny.. “you’re going to have to kill me first”. Morgans tells him it’s complicated – Ava manipulated him, and made him think AJ killed Connie. Morgan says he will not execute him, but Sonny pushes him out of the way, saying he has hurt too many innocent people – he tells Michael to take the shot.

Julian and Alexis and Ned
At the hospital, Sam thanks Julian and Alexis for their support and turns to leave with Danny. Ned rushes in to hug her, and hears Danny is going to be just fine. He tells her Larry has come for a visit – he was delivered via Jerry Jacks. He asks Julian to fill in the blanks about Jerry?? Julian says he hasn’t seen him for a very long time – Ned doubts that’s the truth, but he has to get back to the house. He gives Alexis a kiss goodbye in front of Julian, who is surprised she is staying with Ned after what they have been through, as a family. He thought they had a breakthrough? He would lay down his life for his family, including her. Does that not mean anything? He suggests she come back to him, but she reminds him about the lies.. and how he puts himself in danger. She wants him to say “he’s out”.. she loves him so much maybe staying away from him will keep him alive?

Sam meets Jason!
Around the corner, Jason tells Liz there has to be somewhere he belongs, but she still insists he stay with her. Danny comes running down the hall, hugs Jason’s leg.. and he comes face to face with Sam. She apologizes for Danny, and Liz introduces her to Jason! Sam mentions how Danny was drawn to him in the ICU, but he doesn’t remember. They compliment Liz on her excellent work, and Sam says all Morgans have been treated by her. Jake wonders about that name he keeps hearing “Jason Morgan”. Sam replies it’s her husband, Jake mentions he has no memory and is sorry for her loss.

A stumbling drunk Larry?
Patrick arrives at the Quartermaines, demanding answers from Tracy about Luke. Meanwhile, Larry stumbles around the house and passes out on Monica’s bed! She wakes up screaming and asks what the hell is going on? Tracy explains where Larry came from, and Patrick mentions he is investigating Luke as well. He corners Larry, who says he was kidnapped in a burlap bag, but Patrick suggests he was in on it with Jerry? Larry yells he had nothing to do with it, Tracy says she will get some answers when Ned returns home. Tracy suggests he stay with him – he might be a victim like Luke, and could remember something. Ned agrees to look after his father while he stays at the house. Larry stumbles away with a bottle, then quietly makes a call on his cel phone.. “Jerry, phase one went according to plan. It’s time to initiate phase two!”.

Ava is desperate
At the hospital, Ava is screaming for her baby while Silas attends to her and tells her stay calm, they will find Nina. She blames Sonny, then finally passes out – Kiki wonders what she meant..? She is worried about the baby, but Silas doesn’t think Nina would hurt her. She also mentions Michael is out there as well – she is very scared he will do something crazy.

Ava wakes up and Silas and Kiki tells her the police are doing everything they can to find her baby. Ava tells them she left the brownstone because of Michael!

Nina and Madeline together..
Nina tells Madeline to call Silas, he needs to be reunited with his family – his daughter was just born. Madeline says she needs to take a moment to think, when Nina realizes she needs to bring their daughter to him! Madeline mentions he may not appreciate the distraction at work, Nina agrees and tells her to start dialing – this baby will save her marriage. She reminds Madeline she has millions of dollars she will never see.

Madeline “calls” Silas, and tells him Nina had the baby.. a little girl. Can he come over? She gives him their hotel room number. She tells Nina it’s time for her to honor her deal – she wants control of the family finances, and hands her the phone to make call her advisor. Just like she promised.

On the phone, Nina tells her advisor to keep up the good work. Did Madeline expect to see any of the money? Poor, gullible desperate Mommy.. she injected her with a drug that could have caused her to miscarry. She could have lost her beautiful baby! She picks up a lamp.

Ava explains that Sonny stopped her at the brownstone and tried to kill her, but Michael let her go. He only wanted Sonny!

Sonny tells Michael he understands, Dante tries to convince him to stop – he would lose everything he built in AJ’s name. Being like Sonny would have been AJ’s worst nightmare for him… Sonny would win, he would be a Corinthos. Save yourself.. drop the gun.

Jason knowingly asks Liz if she knows anyone who could offer room and board in exchange for help around the house?

Patrick tells Sam there is more to Larry than meets the eye.

Nina looks at Madeline, lying on the floor unconscious.. soon our handsome prince will gather us up and take us to out new life together. One happy family. She waits for Silas…

Kiki asks Ava what Michael wants with Sonny? She tells them he is going to kill his father.

Michael drops the gun, and tells Dante to do his damn job. Dante cuffs Sonny and reads him his rights..