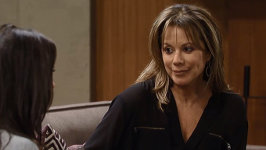 At the hospital, Nina tells Rosalie she met Silas’ mistress, and shows her the Crichton Clark business card. Rosalie says it isn’t hers, but Nina wonders how he got it. They talk about her conversation with Ava, and Nina goes on a rant about how SHE wants a baby. She tells Rosalie that Britt told her she can’t have kids, but says Britt is wrong. And she doesn’t need a shrink to deal with the news – “I’m as sane as the next person”. She will prove her wrong by having a child! Rosalie asks how she can have a baby.. is she planning to steal Ava’s baby?

Patrick & Sabrina have different theories
Sabrina wants to know who Patrick thinks ran them off the road?  He tells her he saw Silas who told him about the Crichton Clark business card. He reminds her that’s where Robin has been working for a dangerous man – maybe he was responsible, as a warning to her. Sabrina thinks his theory is wrong… she thinks Rosalie had the card, and that’s it. Patrick asks why she is so sure about that? She thinks the card is flimsy evidence, but Patrick believes the clinic is important.. Sabrina tells him to let it go, or he will have to tell Sam about Jason.

Alexis, Sam and man troubles!
Alexis receives a text from Julian – “please reconsider, I love you”. She texts back that she can’t be with him, but he doesn’t believe it’s over.

Sam tells Alexis she can’t trace the number on Rafe’s phone, but is doing the best she can, Patrick deserves to have answers. Alexis questions her about the trip with Patrick, then they talk about Nina – Sam is still convinced it was Nina eavesdropping on her conversation with Silas (that Patrick considered letting Rafe die on the operating table). She doesn’t think Nina needs a wheelchair! She believes Nina wants Silas to feel she’s helpless (how true!), but she can’t prove anything. She still cares about Silas, but he didn’t leave her a choice. They talk about Julian, and over a glass of wine, Sam says she likes them together.. as Julian keeps texting Alexis. Alexis says they both need to find new men!

Over a bottle of wine, Alexis says they should go after men they can have – Sam doesn’t think she can move on after Jason and Silas, but Alexis grills her about Patrick. Just as she denies anything romantic between them, Patrick knocks on the door.. clean shaven! Alexis watches them flirt.

Shawn has a plan for Ava
Carly is worried, but Sonny doesn’t think Kiki will tell anyone their secret. While comforting her, Sonny kisses her gently instead! Just says he’s trying to make her feel better, but she decides to leave. Shawn arrives and Sonny tells him that Kiki overheard their conversation, and there is a chance she could tell Franco. Shawn asks if he wants to take him out? Sonny finds out that Ava was at the hospital today to see Franco. Sonny doesn’t like the idea of Franco and Ava plotting together, and Shawn suggests a plan to grab Ava. Sonny agrees, but he doesn’t want the baby put in danger.

Ava returns home, and angrily tells Julian that Franco “that deluded fool” blew her off, refusing to help her nail Sonny as he thinks his relationship is solid. Love is blind, that rule even applies to psychos! She needs to deliver or Fluke will go after Kiki – they agree they have a common enemy now, and they need to take care of each other. In spite of everything, they are still family, which makes Ava weepy. She tells him about seeing Nina, and it was worse than she imagined.. she is very strange and much too interested in her baby! She also told him about her weird run-in with Sabrina, and she’s not sure she is all that harmless, she seemed to imply Ava had Rafe cause the accident.

Carly interrupts Kiki & Franco
Kiki visits Franco in his therapy studio and tells him she ran into Carly – when he asks where, she mutters “with Sonny” just when Carly arrives! Franco didn’t hear, and is curious where she was. They avoid the truth, and talk about Maxie and Lulu, and Michael’s concern for his family. It’s a “terrible situation” as Kiki looks pointedly at Carly. She tells Franco him to take care of himself and leaves, and he notices she was acting strangely – would Carly know why? She suggests it might be because of Michael. He also he assures here they’re all good, he is there for her and just wants to go home. He will make her forget about everything and everyone.

Ava wonders about Sabrina
Ava tells Julian she didn’t cause the accident – she thought about it, but it wasn’t her. She convinced Carlos she master-minded the crash so he would confess to the murder, but Julian wonders why she would protect Sonny? Ava wonders if Carlos has said something, Julian says she shouldn’t care about the nurse. Ava wonders why he keeps looking at his phone?

Sonny asks when Shawn will make his move on Ava?

Kiki introduces herself to Sabrina, and says how sorry she is for her loss, she feels terrible about what Rafe did to her. “I’m sorry Rafe caused the accident”, but Sabrina tells her “it isn’t your fault your own flesh and blood was capable of killing a baby”.

Julian receives a text from Alexis saying that it’s over, while Alexis cries.

Sam asks Patrick if he has any new leads? He says no.

Sabrina looks at a picture of Ava and says she will make her pay for killing her baby.This Week Spoilers
Next Week