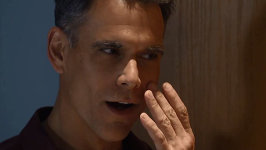 Stavros says all that’s left is to implant the embryo in Lulu – in nine months, she will have their child! He yells at her to cut out the dramatics, he holds a wonder of technology, but she says he is wasting his time, she can’t carry a baby to term. Stavros accuses her of manipulating him, but she says it’s the truth – he mentions her surgery, she is capable of having his child! Dante calls him a freak, but he grabs Lulu – “let’s get started, shall we?”. Lulu yells that she would have to take hormones for weeks. Does he want to take a chance the pregnancy will fail? He says they are at a world renowned clinic, she WILL have his child, and leaves saying he will be back to see it through. Dante tells Lulu Stavros will never hurt her again.

Maxie breaks free
Maxie notices Nathan is hurt – she’s worried he has a broken rib, and they need to get out soon. They reminisce about the previous time they were stuck together, and Maxie looks for something to use to unlock them. Nathan knocks over a tray and they get a paper clip! He unlocks Maxie when a guard walks in asking what the hell happened. When he leaves and Nathan kicks a weight which props the door open. Maxie breaks the paper clip and says she will go get help – find a phone, and call the police. Nathan tries to stop her, but she says there is no time – he promises her to stay safe. She makes a dash for it.. and the door closes behind her.

Shawn tells TJ
At Kellys, TJ asks Shawn about his secret girlfriend. He knows he wasn’t working, and must be seeing someone – who’s the lucky lady? After Molly leaves, TJ asks who the woman is, and Shawn flashes back to Jordan saying TJ will cut him off if he knew about them. He decides to tell him he is seeing his mother! He says the anger turned into something else, but TJ asks if it’s a problem he’s close to a drug trafficker? He thinks he can persuade her to quit the business. Shawn thought he deserved to know, and hopes it won’t come between them. Can he accept it?

Jordan offers Ava help
Jordan pays Ava a visit and asks why she is so jumpy – Ava says it’s just her protective instincts. Jordan is there to see Ava and gives her a gift for the baby – good luck charms for the crib. Ava asks what she wants, Jordan wants to know who she is working for? Ava says she doesn’t want anything to do with their boss – it could put her son in danger. Jordan asks if he is threatening Kiki – Ava says yes, she shouldn’t make the same mistake. Jordan asks why she is letting him get away with it, and suggest they team up! They can take him out – it’s bad for productivity and the baby.

Molly wants answers
Julian arrives at Alexis’ front door, he is there to see Danny – he picks him up and asks Alexis to stay to spend time with their grandson, but she says it’s not a good idea, she is trying to move on. She hates the business, not him. After she leaves, he asks Danny how he can get her back.. and mentions that Ric Lansing is an innocent man. Molly arrives home and asks what the hell he is doing there. She is angry at him, but he says he cares about the family. She asks for the truth about her father, for Julian to make things right – was he an innocent man?

Ned says yes!
Sharing a meal, Ned tells Olivia she needs to eat.. he tells her to lean on her faith, and she holds his hand for a brief moment. She thanks him for being such a good friend and leaves. Alexis runs into him eating alone and they talk about Olivia – Ned mentions he is casually spending time with her, but not dating. Alexis asks if he wasn’t to go out with her! He asks about Julian, and she says it’s really over.. she needs to find a nice new man, maybe it could be him. Ned replies that he is an “old” man and reminds him she ran away from their wedding. But it’s all in the past, he agrees to let her use him to help get over another gangster.. why not?

Julian is about to tell Molly about Ric when Alexis arrives home.

Alexis tells Julian she has a date, and it’s really over between them.

TJ says he doesn’t accept what his mother does for a living, but won’t kick Shawn out of his life.

Jordan presses Ava that she has a lot to lose – Jordan can help get rid of their boss if she knows his name.

Ava doubles over in pain!This Week Spoilers
Next Week