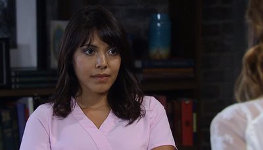 Ava doubles over in pain – it’s the baby! Jordan calls the guards for help, she is taking her to the hospital.

A date for Rosalie
Rosalie receives a text invite from Morgan for dinner with him, Michael and Kiki at Kellys. Nina reminds her to go after Michael (not his brother!) – Kiki is on her list, but Rosalie tells her to “relax”. Nina reminds her she works for her, tells her to accept the invite and try to pry Michael from Kiki – “the list is all”. Just when she mentions crossing Kiki off the list, Silas walks in!

Silas wonders about Nina
Nina wants to know about Silas‘ day, and he wants to know what she was talking about.. she pretends it’s a Christmas list. He grills her, and flashes back to Sam telling him Nina is keeping something from him. She asks why the distrust, asking if he had a bad day at work? He says he ran into Sam, and something she said stayed in his head – she went to Chrichton Clark with Patrick to check up on Nina. She is angry at the news, but Silas says she didn’t find anything.. Nina says Sam needs to get a life, and work on creating a new relationship with her new boyfriend! She accuses Sam of harassment, but Silas says to leave it alone. Nina makes plans for a “fun” evening together, watching Hart to Hart, but seethes about Sam.

Kiki and Morgan
Kiki is surprised Morgan invited Rosalie to join them, Michael thinks it’s a good idea as he needs to bounce back. Kiki also thinks he needs to make peace with Ava – the baby will be part of he family, no matter what, but he is still angry with Ava. Michael and Morgan get in a loud argument, he is sick of people telling him what to do and storms inside. Rosalie arrives when Michael is sitting on his own, all dressed up, and introduces herself. In the meantime, Kiki apologizes to Morgan inside, and he forgives her.

Rosalie wonders if they’re inside talking about the baby, Michael says the whole situation is a little uncomfortable. but she asks isn’t Morgan Kiki’s ex? She also asks if everything is ok between them, and says he is a very understanding boyfriend. Kiki and Morgan are just friends, but Rosalie asks if he ever wonders what they get up to at night? He says there is no going back for those two – inside, Kiki hugs Morgan. They agree to be honest with each other.

Patrick stays and plays!
Sam invites Patrick to stay when she gets home, they sit down to talk about Spencer’s theory about Luke. It doesn’t make sense to them, but they don’t have other leads – Patrick thinks they should tell Anna, who has more resources, but Sam thinks they need to corroborate Spencer’s story on the night before telling Anna. Patrick asks if she has been to the stables, and she flashes back to a passionate moment with Silas. They need to figure out who Luke was talking to.. and decides to trace his steps the night of the party. Danny surprises them both, climbs on Patrick’s lap and they start to play with cars. Sam says he can come over anytime he wants to play cars with Danny.. he is missing out not having Jason around.

Sabrina’s bedside manner
Sabrina reads Ava’s file at the hospital, and snaps at Felix when he asks her about it. He asks if Patrick is any closer to finding the truth, when Ava arrives at the hospital in pain. Felix takes her to an exam room and Sabrina tells her not to worry, she is in very good hands! Felix leaves her with Sabrina. Jordan asks what’s wrong with her, and holds back her bodyguards. Ava is in real pain and Sabrina sarcastically asks if she wants ice chips, a stress ball or drugs to ease the pain? Or perhaps the father.. then coldly tells Ava she could be miscarrying.

Felix asks Jordan how she sleeps at night as a drug dealer.. or how it effects TJ? She could do something more productive with her life, she says “how do you know I’m not”..?

Sabrina taunts Ava that she might be having a miscarriage, and yells that her baby was taken from her.. the doctor arrives and she leaves.

Patrick receives a call – Emma is having a sleepover with the boys, and Sam invites him to stay…

Ava leaves the hospital, saying the baby and I are just fine – “only for the moment”, Sabrina mutters.This Week Spoilers
Next Week