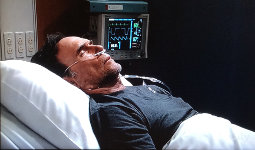 Anna and Obrecht are en route to Chrichton-Clark, and Liesel blames Anna for putting Nathan in danger. Anna is wondering why Victor, the head of WSB is using the clinic as his headquarters, and wants to use Liesel to get inside. She is sending her in with a wire.

Liesel admits Nathan is Victor’s son
Victor wants to know the results of the DNA test NOW.. Stavros enters his office without knocking, he needs to discuss Lulu. He wants to know if Lulu’s medical condition is true – Victor has Jason’s file on his desk, and tells him to focus and calm down, he has big plans for Jason. Stavros says he is retiring for the evening, but leaves with an evil chuckle.

A guard tells Victor that Liesl is there to visit him, he tells the guard to check on Jason for him and asks what brings her to Chrichton-Clark. She tells him she knows Nathan is there.. “her son”.. he asks “our son, don’t you mean?”. She smiles and says she knows Nathan is on the premises, asking if he is league with Peter Harrell for the jewels? He says yes, Mr Harrell is one of his loyal agents, and Nathan is his prisoner. Liesl adjusts her ear piece, losing the connection, and wants to be taken to her son.. but Victor says he wants a DNA test first. She says he doesn’t need the results – Nathan West IS his son.

Felicia blames herself
Felicia and Mac are hounded by the media – is Frisco involved in Maxie’s disappearance? They ask about Mac’s run for mayor, and what if Maxie is found dead? Mac punches out the reporter! Felicia is upset, buy Mac comforts her that Anna will bring Maxie back to them. They are in Anna’s office, when Felicia finds a photo of Peter Harrell and reminisces about him. She sees Maxie’s veil as evidence, and starts to cry – she wishes the Aztec treasure never existed. Mac reminds her it what brought her to Port Charles. He tells her she can’t blame herself.. but she says the sins of the mother are being visited on the daughter! Felicia says she knew there was something off about Peter, but was feeling guilty about being a bad mother.. she says she let her down by giving Maxie her blessing. Mac reminds her that Maxie adores her, the mistakes are in the past, and is a force of nature.

Lulu, Stavros and hormones
Lulu tries to break free, and wonders why Stavros isn’t dead. She is distraught he has an embryo, but Dante reminds her of the hormones needed to carry a child. He says he will protect her, but she says Stavros can make her do whatever he wants, while Dante tries to break free. Stavros returns, he talked to a doctor about her, she will need hormone injections, and in walks the doctor to administer them! Lulu is spitting mad “you psycho freak”.. he says if she fights him, he will shoot Dante. She tells him she loves him, he yells “no” while he watches the doctor with needle..

Nathan breaks free
Nathan tries to break free, when Levi/Peter walks in! He sees that Maxie is missing, where is she?? He points a gun at Nathan, asking where she is. He tells him what a pain in the ass he has been, and Nathan accuses him of manipulating Maxie. Nathan says he suspected him of being a con all along, and Peter says he didn’t trust his instincts because he was jealous. Nathan wants payback for all the things he did to her, especially keeping her from her child. Peter leaves to go find Maxie. A guard walks while Nathan tries to unchain himself.

Peter Harrell Sr in BACK!
Maxie quietly steps through the clinic, and enters a room with a curtain. She pulls back the curtain and sees someone lying in a bed and starts talking to him, asking for help. He repeats Felicia’s name.. it’s the original Peter Harrell! He grabs her hand, she recoils, and turns to leave.. running into Peter Jr. He confronts her with his gun, and she tries to run.. but he wants to introduce her to his father.

Levi/Peter says his father is in this condition because of her parents! He was shot in the head by her parents, made a full recovery, but the bullet fragment was still there, too delicate to remove. It has slowly incapacitated him.. Peter Sr thanks him for bringing her to him.. now it’s time for her to die!

Nathan knocks the guard out and breaks free.

Lulu tells Stavros to go, get the hell out of here, but he wants to take Lulu with him!

Victor asks Liesl why she didn’t tell him about his son? She couldn’t tell him because of Faison.. just as he grabs her in anger, Nathan bursts through the door with a gun! Tell him where Maxie is or he’s a dead man.. “oh come on, Nathan.. you’re not going to kill your own father?”

Anna decides to go in without backup..

Jason is being restrained in a bed!This Week Spoilers
Next Week