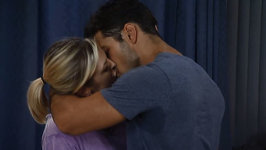 Lulu struggles with Stavros, Dante enters with his gun pointed and Stavros says he will slit her throat. He tells him to let her go, but Stavros orders him to lower his weapon, and the door closes behind him. He kicks his gun to Stavros and Lulu elbows him and gets away! Lulu fights with the nurse, knocking her out with a tray, while Dante and Stavros struggle.

Jason breaks free
Victor’s aide is hit from behind – Jason knocks him out, and takes his file. He leaves them tied up, and looks at the photo in the file.. he stealthily leaves the room with the access card and carefully walks down the hall. He opens a locked door and finds Robin chained to the wall! She is happy to see him – the protocol worked, but he can’t talk for now as he bruised his vocal chords. He shoots her free from the chains, and they hug!

Maxie and Nathan together!
Maxie saves Nathan, and the two share a passionate kiss.. he apologizes, and she says she forgot there were dead bodies around! He shows her how to use the gun, with his arms wrapped around her. She says she thinks she can handle the gun, and picks up the dagger before they get ready to leave the room. She says they need to search together, and opens the door to see bodies on the ground – the guys that Jason knocked out! Victor’s aide comes to with Nathan standing over him, and says the prisoner knocked him out.. Nathan asks WHO.. was it Dante?

Sam and Patrick get passionate
Sam and Patrick share the same fortune “now is the time to try something new”.. she reaches over to read it, and he says he now believes in fortune cookies – here, with her – and they kiss! She stops and ask what they are doing, and he kisses her again, pushing her gently on the sofa. She stops him and says she doesn’t think they can do this. He apologizes, but said it made sense – both their relationships are over, and it seemed right. She said he didn’t misread the moment, and yes, she kissed him back. They both confess to thinking about kissing each other, and Sam says it was really nice. He was hoping for a kiss the night of the pool game, but  Sam says she doesn’t think she is ready for it. He is concerned he pressured her, but she says their breakups are too new.. and she confesses that Jason’s birthday is tomorrow, and her third wedding anniversary is next week. She tells him she is grateful, but isn’t sure if they are both just confused. She suggests they put “them” to the side until they solve the mystery of the accident. He gets it and thanks her for being the voice of reason. They’re good and he decides to leave… they agree to not let things get weird.

Tracy worries about Lulu
Tracy pays Michael a visit at home, she wants to know about the search for Lulu… and what Sonny is doing. How close are the police to finding her? He says he doesn’t know anything, but maybe Luke has a lead.. Tracy vents that she hasn’t heard from him, and probably isn’t looking for Lulu. Michael tells her he will share any news about Lulu, and hopes Luke calls her.

Leisl shoots Victor
Obrecht pulls a gun on Anna, she says they don’t have time – Nathan is still out there. Liesl says she is protecting Nathan and shoots Victor in the chest! Anna asks why she did it.. Liesl says it was to protect Nathan. Obrecht stands over his lifeless body and says it was “kill or be killed”.. she regrets that he had to die and takes his hand, but he isn’t dead! “I hate to disappoint you Liesl”.. she says she shot him as an act of necessity.. because of Nathan. He is the only person who knows Nathan is NOT his son. Victor doesn’t understand why, but Liesl says the truth is FAR worse.

Dante and Stavros struggle
The agents tell Anna they have located Dante and Lulu – and while Stavros gets ready to shoot, Lulu jumps in front of Dante. Anna says they need to be careful, look for another entry into the room. Lulu yells that he has to kill her first, and he reminds her that he can raise their child without her. Dante lunges at him, a shot rings out, and the two struggle for the gun!

Anna and the agents burst thought the door to see Dante standing over a lifeless Stavros – “its about time, Commissioner”. Stavros is dead.

The destruct sequence
Obrecht won’t tell Victor who Nathan’s father is, and picks up a pillow to smother him, but Victor sets off an alarm in his pocket.. and pushes a button to trigger the destruct sequence! In a few minutes, the clinic will be destroyed. Victor tells her he isn’t doing it out of spite, it’s to protect the clinic’s work – in the wrong hands it would mean biological warfare.

Victor tells her she may have some time to save herself and that bastard son of hers.. “tick tock”.. but Obrecht can’t open the locked door!

Anna tells Dante and Lulu to leave while they do one more sweep of the building.

Robin and Jason get ready to leave the room, with Anna just outside.This Week Spoilers
Next Week