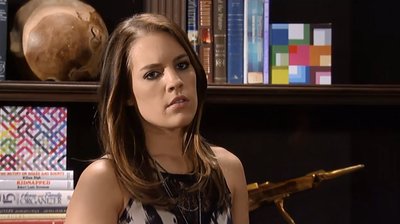 Nina is working out when Rosalie arrives (remembering Richard Simmons!) – and asks if she destroyed Kiki yet! Rosalie reminds her they were on a double date AND in a public place, but assures she did what she could to sow seeds of doubt with Michael about Kiki and Morgan. Nina is agitated that revenge isn’t coming faster, but Rosalie smiles that something DID happen. She overheard Kiki and Morgan talk about Franco, her new best friend… she has information she doesn’t want to tell him. Rosalie tells Nina that Carly is sleeping with Sonny Corinthos! Nina says Carly is making a fool of Franco, her friend.. and tells Rosalie to let her worry about that.

Michael and Morgan talk about Kiki
Michael comes to see Kiki, waking Morgan up on the couch – they talk about Kiki and the work they’re dong on the house (a good team!). Morgan admits he has been avoiding thinking of Ava and the baby, but Kiki said exactly what he needed to hear. Michael tells Morgan about Rosalie’s suspicions about him and Kiki, just so he is aware of her comments about the two of them – he understands why she would be suspicious, and Morgan wants to know if he is jealous?

Kiki confides in Silas
Kiki meets Silas for breakfast at the hotel, and they talk about Franco… Kiki likes him, but Silas isn’t a fan. She is a good kid and is lucky to have him, and he won’t bash Franco anymore. She doesn’t feel like she has been a good friend, as she has been keeping a secret from him. She tells Silas she confided in Morgan, not Michael…who would tell Franco right away. He asks why she told Morgan, she says he sensed something was wrong, and it’s just easy with him. She doesn’t want to lose him as a friend, and anyway, Morgan is now interested in someone new.. Nina’s nurse. Silas says he does not trust her.

Franco’s breakfast in bed
Carly wishes Franco a Happy Birthday and brings him breakfast in bed… as it’s Jason birthday. She asks him what he wished for, he says he wished he never accused her of sleeping with Sonny. He is ashamed of his behavior, as she would NEVER do that.. she says it’s in the past, just like her relationship with Sonny. He is the only man she wants, and the two make love. Carly tells him she has a special evening planned for him at the Metro Court, and asks him to invite some guests! He wants Kiki there, but Carly says that isn’t a good idea… pretending it’s because he doesn’t get along with Michael. He tells him to invite them both.. and Carly agrees. Carly suggest he invite Nina Clay, his new friend.. and that means Silas will be there as well. Franco thanks Carly for making his birthday special.

Sonny’s plan for Ava – today!
Shawn comes to see Sonny in the office, with an update on Ava’s scare in the hospital. She was shaken up, but it wasn’t too serious, but all Sonny cares about is the baby, and who the father is. He wants to get her back, and Shawn says today is the day, while Julian is out of town. Olivia comes rushing in saying Dante is okay! He calls Michael with the good news and speaks to both him and Morgan. He tells Olivia if the baby IS Morgan’s, he will need help – but Olivia asks “isn’t Ava going to be around to raise the baby?”. Sonny covers and says he will be a first-time father. They hug each other and she leaves.

Sabrina’s plan for Ava
Ava is lying on the couch at home, rubbing her belly, when Sabrina stops by to see her with something important to say! She has come to apologize, she never should have said she could be losing her child. She was angry about losing Gabriel, and couldn’t separate her own experience. Ava is angry, but Sabrina says she knows it was unfair, taking it out on her.. she is deeply sorry, and asks forgiveness. Ava accepts her apology and says it’s over now. Sabrina remembers she has something for her.. a prescription! From the doctor.. she wanted to save her a trip to the hospital. Ava thanks Sabrina for stopping by.

Michael tells Morgan he is cool about him and Kiki, and Morgan takes off to run some errands.

Sonny needs Ava under his control to make his family complete.

Michael is in the house alone, when there is a knock.. Rosalie in a red hot dress!

Sabrina tells the guard everything went exactly as she hoped.. the prescription can cause premature labor!

Carly invites Kiki to Franco’s birthday dinner, and doesn’t want her to ruin it (or her life) by telling him she slept with Sonny. Kiki says she will keep the secret so long as Carly keeps her distance from Sonny.. who walks in.

Franco tells Nina he will never doubt Carly again, but Nina stops him.. there is something she has to tell him!