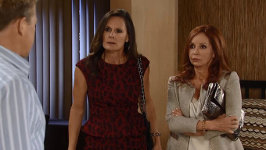 Anna receives a call from Robert Scorpio, she doesn’t think anyone could have survived the explosion, and tells him that Obrecht shot Victor right in front of her. They are worried she will make trouble for them about Faison, who they had to dispose of in their own secret way. She tells him Duke isn’t keeping anything from her since he left Sonny’s organization, opens the door and sees him on the couch with Lucy Coe. Lucy nervously chats, and says nothing inappropriate is going on. She was venting about Bobbie Spencer and the situation with Scott – Anna tells her she needs give him an ultimatum and make him choose.. right now. Lucy leaves, the two share a passionate kiss and go into the bedroom. He makes her a martini, and wonders if he should get a job at the Floating Rib as a bartender. He remembers when Fasion masqueraded as him, and says at least he is safe behind bars right now. Anna decides to tell him something..

Scotty makes his decision
Bobbie gives Scotty the news about Dante and Lulu, he stops her before she leaves.. she isn’t comfortable that he hasn’t made a decision. He asks why she lied to Franco about their dinner, it seems very fishy to him. There is a knock at the door – it’s Lucy saying they are going to settle things once and for all! Bobbie agrees with Lucy and says it’s all wrong, he can’t have both of them. Scotty admits he has been disrespectful, but someone is going to get hurt.

Robin drives to Port Charles
Robin and a silent Jason are on the road, they are close to Port Charles. She wants to tell Sam and everyone else that he is alive, and hopes he will forgive her for not telling anyone about his condition. She tells him Patrick now hates her, but at least she will be able to hold Emma again. And gives him the news that Danny is HIS son! She notices a car tailing them, but manages to evade them. She decides to go to Sonny’s place first as it it will be safer there.. then he can call Sam, who will be happy he’s alive! Jason is out of ammo, so Robin hands him a scalpel – she is going to go to the Metro Court to see Anna, and he needs to drive straight to Sonny’s.

Kiki gives Franco the bad news
A smirking Franco startles Carly, she says she wasn’t expecting him so early. He asks if there is anything going on that he shouldn’t be seeing, and then tells her Nina can’t make it, which is just as well – “as she knows all about you, Carly”. Jealous of their friendship, that is… Carly says it’s a joke, she knows nothing is going on between them. He replies it’s just like her and Sonny. Kiki and Michael arrive.. Franco wasn’t expecting to see Michael and tells him to go help Carly. He flat out asks Kiki if Carly slept with Sonny! She asks if he is still upset about the kiss.. but Franco tells her Rosalie overheard her talking with Morgan. He says Carly just lies to him, and he is counting on Kiki.. he needs her to be honest, please. She tells him it’s TRUE.. Carly and Sonny slept together.

Sam and Sonny talk
Sam visits Sonny, and notices his guards are missing – everyone else has been pulled to a big assignment. She notices Jason’s photo, and Sonny says they are both thinking about him. She asks about the “big job”, he says it’s just business. But she is actually there to talk about Luke – could he be helping the Jeromes bring down Sonny’s organization? He thinks Spencer has a wild imagination, but agrees it’s possible Luke might have silenced Spencer. Sonny can’t figure out Luke’s angle and they decide to keep their eyes open.

Ava and a gunfight!
Shawn and Max pull their guns on Ava’s guards. Inside, Ava gets a call from Kiki just before she takes the pill from Sabrina. She drops the first pill, is about to take the second when she hears the commotion outside. She hits Max over the head, knocks over the pills and tries to leave, but Shawn is at the door… “I don’t think so”. Just as they take her away, a group of men with guns tell him to let her go! A gunfight erupts and Shawn and Max drag Ava back inside.. she yells they are going to hit the baby. The men outside get shot by another group that just arrived!

Michael talks to Carly about his feelings for Jason.

Lucy bursts in and tells Anna that Scotty chose Bobbie.. she hugs Duke and cries.

Scott apologizes to Bobbie for putting her through everything, and says Lucy once chose Kevin over him. He tells Bobbie what they have is trust.

Kiki tells Franco she overheard Carly and Sonny talking about sleeping together. It was wrong, and just one time. She didn’t want to hurt him, and was trying to protect him.. even Michael didn’t know. Franco laughs and says the joke is on him as there is something he has been meaning to tell Michael!

Carly hands a stone-faced Franco a glass of champagne, and makes a toast to him.. how wonderful he is, and not the monster everyone thought. She says that’s why they fit as she has been called the same thing.. but she was lucky they got to know her. She can’t imagine her life without him.. and hopefully he sees how much he means to her and all of them.

He cuts her off, and says he has a few words to say!

Ava doubles over in pain before Shawn and Max can take her away.