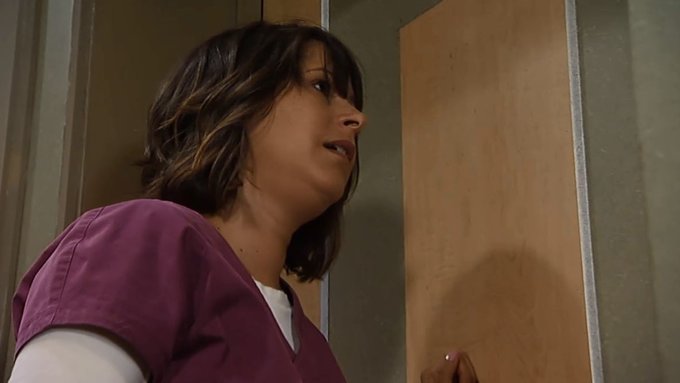 Ava doubles over in pain and passes out.. Max leans over to check her pulse, and she grabs his gun. Shawn stops her and tries to drag her out. She says she needs to pick up the medication, which fell on the floor. Max leaves to give Sonny an update, and Ava asks if they are going to pick up the pills together. Just then, Jordan walks in, wondering what happened..? Shawn has his gun pointed at her, and tells her to stay out of it as Ava is coming with him. Jordan pulls her gun on HIM and says “the hell she is”. Ava asks Jordan to help her as Sonny will kill her after the baby is born. Jordan asks Shawn if it’s true, and says she won’t let him drag a pregnant woman out. They both ask “what are you going to do.. shoot me?”.

Ava tells Jordan she will reward her if she helps.. with her gun on Shawn, she gives Ava her keys and tells her to go. She will pick the pills for her after. The two drop their weapons.

Franco proposes marriage!
A stony-faced Franco listens to Carly’s toast and wants to add a few words.. something he really wants to get off his chest. He thanks Carly and wants to repay her, tell her how he feels about her. And Bobbie, as it was her idea that he apologize to Carly for his suspicions about Franco. He says that Michael will be the most effected! Michael asks what the big mystery is..? Franco says he knows Michael hates him, and it means a lot that he came to support Carly.. and he knows he wants her to be with Sonny, but his attitude will change. Michael is confused.. then Franco asks Carly to marry him! Everyone is stunned.. he doesn’t have a ring yet, but she has been SO loving, caring, openhearted and kind. He really does love her and wants to show her. And it might convince Michael and Bobbie that he doesn’t want to hurt her. He gets down on one knee.. “will you be my wife?”. Carly says it’s crazy, and flashes back to Sonny. Franco says he made mistakes and had no reason to be all over her about Sonny, but she forgave him. Is Sonny making her hesitate? Is it Michael..? Franco says he will come around, then Carly says yes..

Jason gets close
Helena’s henchman pulls a gun on Jason as he approaches Sonny’s place and tells to him co-operate or he will wipe out his boss and his Missus! He drives away with Jason in the car.. Helena’s orders were to return him undamaged.

Sam and Sonny talk about Jason inside the house, then Sonny asks Sam to stick around while he gets an update on the plan to take Ava… as Sam leaves Sonny’s, she stops.. she sees the scalpel that Jason dropped outside the door! Sonny will check the grounds, and Sam tells him to keep her posted if he finds anything. Max returns and gives Sonny the update on Ava..Shawn is getting her out now.

Patrick and Anna talk about Luke
Emma wants to sleep in Patrick’s bed tonight… she wonders if mommy even wants the divorce, as she heard him say she never sent the papers back. He tells her there are things she dosn’t understand, but Emma wonders if she just wants to come home? Anna stops by for a visit and tells Emma she misses Robin too.. and she puts a sad little Emma to bed. They talk about Robin, when Sam arrives at his front door with an update on her visit with Sonny. She tells Patrick that Sonny doesn’t trust Luke, but doesn’t think he is responsible. Anna wonders what they are talking about, then tells Sam and Patrick she doesn’t think Luke organized the accident, but confidentially, he is the subject of an ongoing criminal investigation. Patricks thanks Sam for coming by, and she leaves. Anna tells Patrick that Dante has been working on it.. and shares the news about Crichton-Clark, including the explosion that took down the whole building.

Robin and Helena
Robin knocks on Anna’s door.. Helena answers! She survived the explosion at the clinic, and Robin asks where Duke and Ann are? Helena says they are out, and when Robin reaches for the phone, Helena threatens to harm Patrick and Emma if she calls 911. She shows Robin a live stream of Patric and Anna talking in his house! She hears that Emma thinks she just wants to come home. Helena sks is she will co-operate.. or is her family going to live or die..? Robin says Jason is still out there.

Helena tells Robin that Jason never got inside Sonny’s place.. he is being taken to a secure holding facility, and no help is coming.

Jason attacks Helena’s guard and jumps out of the car!

Max and Sonny reminisce about Jason, and he says Carly will always be Mrs C.. and toasts Sonny for taking Ava.

Scott raises a toast to Carly and Franco! Kiki is surprised and goes to talk to Franco.. Kiki asks Franco what the hell was that about? He proposed after finding out she slept with Sonny.. but he says she is done with Sonny. He really does love her, and wants Kiki to keep the fact that he knows about Sonny between them.

Michael asks Carly if she knows what she’s doing..? She says it’s for the best.

Jordan asks Shawn how low can he go, kidnapping a pregnant woman so Sonny can kill her in a few months? Shawn says Ava has never been vulnerable in her whole life.. she is a cold blooded killer!

Ava calls Julian from the car.. she needs help.

Robin asks Helena what she wants from Robin and Jason… she has grand plans for them.

Patrick asks about Robin at the clinic – he tells Anna that’s where Robin has been living!

A car approaches Jason, who has collapsed on the road…it’s Ava!This Week Spoilers
Next Week