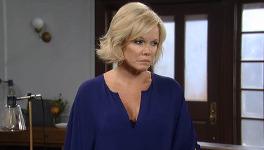 Julian receives a visitor, a stranger sent by Luke! He knows Team Corinthos wiped out most of his security forces, and has brought in a new crew to help him. He wants to know where Ava is. Julian says he just doesn’t know, but Luke wants to find Ava, since she failed to kill Michael Corinthos… and hasn’t delivered dirt on Sonny. Julian has two choices – come up with the goods on Sonny, or kill Michael. Julian turns the table and pulls a gun on the thug, saying the boss needs him more than he needs him. Julian is in charge of Port Charles, and won’t do any dirty work for the boss. The guy says he will just have to do it himself, and angrily leaves.. just as Jordan arrives. Julian asks if she knows what happened to Ava?

Jordan and Shawn
At the hospital, Jordan asks about the patient when Shawn approaches her. He heard about the accident, and wants to find out how the victim is – and he knows it was Ava driving. He figures she called Jordan to help get away, which is why she took the rap. He asks her to be straight with her, she tells him it’s true – he wants to know where Ava is, but she says no. He says he’s done, but she pulls him close and they kiss. He stops her and says his job is to find Ava… but Jordan honestly has no idea. She grabs her purse and leaves.

Morgan wants to help
Ava sees a missed call from Jordan, while Morgan brings her a breakfast tray. He asks how she is feeling, he is worried about her, and still can’t believe Sonny could kidnap her, then kill her after the baby is born. Ava says she needs to get the hell out of here… he asks where she will go? He reminds her Sonny has resources and will find her if she stays with her mother. Morgan insists she stay with him, but she doesn’t want to involve him. He offers to be a buffer between them, he wants to do this. She will be safe at his place, and she finally agrees.

Kiki flashes back to telling Franco about Carly, Michael asks if there is something on her mind. He asks if she and Morgan are hiding something from him, she replies they have been talking about Ava and the baby. She doesn’t want to come between the brothers, and suggests they support Morgan and Ava when the baby is born. The two get passionate, then Michael has to get ready for work.

Tracy talks about Luke
Dante and Lulu wake up in happy in bed – Tracy anxiously arrives at her front door, VERY happy Lulu is fine, and asks if she heard from her father? Tracy tells Lulu he never cheated on her, it was a scam to reclaim ELQ… she claims Luke misplaced his passport, but sends his dearest love. Lulu doesn’t buy it.. what’s going on with them? Tracy admits she doesn’t know where he is, and hasn’t seen her since the honeymoon. He has become a complete stranger. Dante mentions he may know what’s happening, Anna has him under investigation for criminal activities. She thinks he is head of the Jerome crime family, Tracy and Lulu are shocked. The info is based on an undercover agent.. and they wanted to clear Luke’s name. Dante asks Tracy if it’s possible..? Yes, she has seen Julian and Luke together… in the stables at Windemere.

Sam and Patrick ask Alexis about Luke
Sam answers the door in her towel – it’s Patrick! She invites him, and goes to get dressed, when Alexis arrives. She tells him she understands what he is going through with Robin and the divorce, and mentions she went on a date last night – he might consider doing the same thing! Sam returns, and Alexis asks if they made progress on the case? They mention Luke is a suspect, but Alexis says it’s a ridiculous theory, he would never hurt a child. They mention Spencer’s story that Luke caused the accident on purpose, and overheard him say he was going to take Sonny down. Alexis thinks she knows who Luke has been talking to.. she thinks Julian may have been the one in the stables with him at the Windemere party.

Jordan tells Julian she took responsibility about the accident, but doesn’t know where she is.

Kiki arrives home and Morgan grabs her.. she asked why he did that, Ava says “because of me”.

Julian tells Jordan the thug she just met was here for Ava, who refused to take out Michael Corihthos.

Michael is getting ready for work, when there is a knock! He opens the door..This Week Spoilers
Next Week