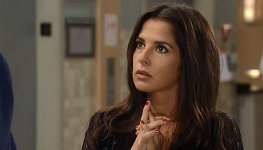 Shawn breaks the door down, points a gun on Kobe, who grabs Michael as a shield.. “I don’t think so”. He wants to know who gave him up to Shawn..? Michael tells him to let him go and leave before Shawn shoots him.. Kobe says he and Shawn are the same, they are both hired guns, so why doesnt’ HE leave? Rosalie makes a quick dash towards the door, distracting Kobe – then Michael fights with him for the gun.. and a shot rings out! Kobe drops to the ground. Rosalie starts to freak out and Michael says everything is ok.. he is dead now, and Michael will fix this. He tells Shawn to call Sonny. Rosalie asks Michael how he is so calm, and he thanks her for saving his life by distracting Kobe. She asks if this happens often, and starts to laugh and cry. She thought Morgan was the wild one!

Julian and Alexis’ passion ignites!
Alexis asks Julian if he reports to Luke Spencer? He says she doesn’t get to ask how he spends his time, and with who! She wants to know for Sam, as she and Patrick are looking into the accident. Alexis tells him she thinks he met with Luke then night of the engagement party – he swears on his life, and Sam’s life, that he is NOT working for Luke Spencer. She thanks for answering the question, and gets ready to leave – he asks if there was any other reason for the visit? He tells her he felt something when she was on her date with Ned, and so did she. Can she deny whe wants to be with him? The two share a passionate kiss and close the door.

Learning more about Fluke
Sam and Patrick tell Lulu they think Luke caused the car accident. Lulu is shocked and Tracy insists that’s just not possible. She is sorry for his loss, but this is a baseless accusation – he would never endanger a child’s life. Lulu says it can’t be true, but Patrick says they have a source – Spencer Cassadine! Samtrick explains how Luke threatened Emma, and told Spencer he caused the accident on purpose. They think Luke had met with Julian. Lulu says they KNOW he did. Tracy saw them in the stables.

Franco shows Nina his app
Franco says he will have a front-row view of everything Carly does between now and the wedding.. when she asks how, he shows her his phone! The necklace contains a camera, he is “spying on his new fiance”. Nina asks what he will do if Carly isn’t through with Sonny? He tells her he has information that would devastate the two of them. He decides to turn on the camera, and sees she is with Sonny right now.. he hears her tell him to go, but Sonny wants a kiss goodbye. Carly says she is marrying Franco.. he asks again. Nina takes Franco’s phone from him and says he is acting kinda crazy. He needs to stop before he goes off the deep end.

Carly and Sonny talk
Carly agrees that Ava has too much information, they could lose Michael. She needs to be found and dealt with. Sonny tells her he will keep her posted, and starts to remind her of their times together. She asks him to leave, he gets angry and yells “are you going to marry this freak?”. He is worried he will tell Michael about the shooting, and says she doesn’t even have a ring. Carly tells him to shut up and shows him the necklace. He asks for a kiss goodbye. Before Carly can answer Sonny a second time, he receives a call from Shawn – there has been an incident at Michael’s, and he needs to come down there right away.

Ava comes clean about everything!
Ava tells Kiki and Morgan she SAW Sonny kill AJ Quartermaine. Kiki says it was Carlos Rivera, but Ava says he confessed because she asked him to – “I gave him some incentive”. She explains how the family business works, and how Carlos took one for the team… she was there in penthouse when he was shot, and not in New York. Kiki wants to know what really happened, and Ava said it was payback for killing Connie. He snapped and broke his promise to Michael, and has been lying to them ever since. Ava says she is sorry – she moved into Sonny’s house because she didn’t have a choice. She is the only witness to the shooting, and the only thing protecting her is the baby. Kiki asks if she has proof that Sonny shot AJ? She knows Ava will lie about anything at any time. Morgan flashes back to Sonny talking about Ava holding something over his head, and tells Kiki that she IS telling her the truth. Morgan figures it all out, and Ava says that another person knows – Carly!

Julian pushed Alexis up against the wall, they kiss passionately.. then Julian stops and says he can’t do this.

Patrick asks Dante what he knows, he tells him about the undercover operative.. and that Tracy has contacted Luke.

Morgan finds out AJ told Carly who shot him on his deathbed. Ava tells them they decided to not tell Michael together. Kiki says he has a right to know who killed his father! Morgan says the news would destroy Michael and his relationship with his parents.

Carly rushes with Shawn and Sonny, Michael explains what Rosalie was doing there. Sonny thanks him for protecting his son, and tells Rosalie the police aren’t coming, Michael didn’t kill anyone, is that clear? He tells her where to find him if she needs anything. Michael says nothing will happen to her, and she leaves.

Carly is upset, and Sonny hugs Michael and says he would never let anyone hurt him.

Tracy receives a text from Luke – he is in Amsterdam and wants to meet.

Julian tells Alexis he doesn’t want to sleep with her, then have her walk out the door like last time. He wants to be with her – if she just leaves, that won’t happen. She says she won’t leave, and they fall on the couch together!This Week Spoilers
Next Week