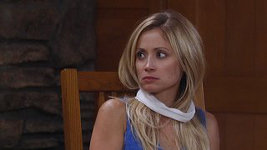 A warning from Carlos…
Carlos hugs Sabrina when he sees her, the guard pulls them apart with a threat. She wants to know if he’s okay, but seeing her makes it all worthwhile and the thought of her keeps him going in jail. She tearfully gives him the news about Gabriel, and tells him she is there to apologize to him. It was wrong to blame him for the death of her child, but she still doesn’t how he could confess to AJ’s murder. She tells him it was Rafe who caused the accident, that someone made him to do it – Carlos says it makes sense, but won’t tell her more than that. She thinks he is hiding something, but he says she needs to stop asking questions. He warns her she might end up dead herself.. he was protecting her from Ava Jerome.

Dealing with “not Luke”
Ava blames herself for the problems with “not Luke”, and reminds Julian that Fluke could come after their whole family. She needs to get Franco to play ball if she wants to get evidence against Sonny. She has to persuade Fluke that leaving Michael alive and waiting for evidence against Sonny is a better plan. Fluke calls and Ava has a proposition – she has an “in” with Michael, which means an “in” to ELQ. She proposes a better move against Sonny that will send him to prison for the rest of his life. She thinks she managed to convince him to wait, but now Ava has to come up with a plan. She heads to the hospital to see Franco.

Silas and Franco
Silas approaches Franco in the hospital to talk about Nina. He doesn’t trust Franco, and his art therapy classes have been taking her away from physical therapy. Franco openly laughs and Silas asks if he’s missing something. He doesn’t think that’s what she really needs.. and Silas would be surprised at what he knows about his wife! He knows about Nina wanting to have a baby, and how much she cares about him… but also knows he messed around with Ava.

Nina gets bad news
Nina happily sees Britt, her “instant cousin”, wanting to know if she’s pregnant after last night. She explains the symptoms are the fact that she made love to her husband last night and this morning. Britt says there is no way to determine if she’s pregnant yet, but Nina imagines she feels it. and explains how her mother “stole” her baby, and she wants another one to take its place… to fill the void. Britt says it’s too early and suggests a check-up. She’s convinced it will work out because of Ava Jerome can have baby, so can she. She asks Britt if she has children, reminds her they are family and Britt tells her about the stolen embryo. but Nina is sympathetic. Then she imagines Britt telling her she IS pregnant… but Britt actually says she is in early onset menopause and can’t conceive a child. She is floored and asks for a moment alone… and decides she doesn’t want to feel sorry for herself anymore, and will have Silas’ baby one way or another!

Nikolas, a royal jackass!
Nik tells Liz he still has feelings for her and asks if they still have a chance, he never stopped being in love with her, even though their timing has always been awful. He grabs her for a kiss, and she pushes him away, calling him a royal jackass. She is angry that he would have slept with Britt had she not called him, but maybe that would have been better as she could finally put “this” to rest. When she questions why he would sleep with Britt, Nik claims it has been a long time since he has been with anyone, and she reminds him of her own celibacy! When he says he has never been “indifferent” to Britt, she turns the tables and says she has more respect – she isn’t okay sleeping with him after he tells her he has feelings for someone else! Nikolas asks where they stand, reminding them of their confusing past – AJ, Ric, Britt.. but Liz doesn’t want to be with someone just in bad times. He begs her not to do this to him again.. they need to finish their conversation. Liz states that unless he tells her he doesn’t have feelings for Britt, they have nothing to talk about. He leaves and she closes the door.

Levi’s plan unraveling
Lulu calls Dante, and they put a trace on the call. Dante explains who Peter Harrell is, and the history of the Aztec jewels, but they don’t understand why Levi would say Lulu is involved. The original theft involved Frisco and Felicia, but Dante assumes Luke and Laura were involved as well. Levi returns and takes the phone away. Dante asks him what he wants, and tells him he is digging himself a deeper hole.. Levi disconnects the call, and Maxie and Lulu start to taunt him about his real name. Maxie asks if this is some lame vendetta.. but Levi says his father put a ring on Felicia to get his hands on a fortune, but wound up a fugitive thanks to their parents, which was as good as dead. And what goes around comes around.

Taunting Levi
They get a hit on the phone, and Levi says they just made things more difficult. Maxie starts talking about how hot Nathan is, way hotter than this loser.. and how Nathan told her to stay instead of trying to find herself. She thinks Nathan was her sign from the universe, not this lying vile second generation pig. They continue to taunt him, and he admits Lulu has a different fate in store for her

Nathan and Dante head out with a team to find the girls.

Ava and Nina come face to face at the hospital!

Elizabeth stares at a photo of Nikolas. He runs into Britt at the station.

Just as Levi is untying the girls, muttering about meeting the boss, Dante announces the place is surrounded, come out with your hands up!This Week Spoilers
Next Week