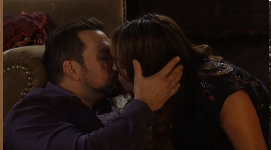 PCPD at the pier
It’s a rainy night in Port Charles while Anna talks to the Coast Guard at the pier, giving them a recap of what happened with Levi. Dante returns with the captain who rented his charter boat to Levi (“Ask No Questions”) – he saw the girls, and repeats their animated comments to Dunkleman (giving him an earful!). Then a “long-haired hipster” told him to jump out or get shot and they drove the boat away. He is positive they were driving north west to Canada.. they drag the captain to the station while he yells he is the victim. The coast guard informs them the boat has been spotted from the air, but is sinking. Nathan is angry at himself for not figuring it out sooner.. Dante said no one saw it coming. The Coast returns with bad news… the boat sunk, the search and rescue team hasn’t found any bodies but they found a wedding veil!

Mac on the mend
At the hospital, the doctor informs Mac he will be fine, the bullet didn’t travel, and Lucy arrives at the hospital. They tell Elizabeth about the wedding.. and Lucy is upset that she almost pronounced them man and wife – the “Dingleberry” wedding never finished! Liz is shocked by the news and Mac is angry he is stuck in the hospital. Liz asks if they have called Nikolas… he would want to know.

Britt in seduction mode
Britt kisses Nikolas, and he kisses her back, but stops her. Tells her it’s not a good idea because of Elizabeth! He wants to be honest – he still has feelings for Liz, they have always danced around their relationship (friends or more?) and he wants to start over with her! She asks if he has ANY feelings for her – Nik says he can’t stop loving her, but the feelings are complicated by her betrayal. His trust IS being restored, and while he cares about her a lot, he doesn’t want to sleep with her if there is hope with Elizabeth. Britt moves into seduction mode, saying she misses him and wants to be with him, even if it’s only until dawn. “I won’t stalk you” (yeah, right!). The two share an intimate hug and she says “no strings attached”.. offering just one stormy night together. Nik kisses her again, and just as they move to the sofa, his phone rings.. he chooses NOT To pick it up and gets passionate with Britt instead. The phone rings again, and he picks it up – it’s Liz from the hospital and tells him it’s about Lulu.

More elevator confessions
Nina and Franco are stuck overnight until the repairman can locate a replacement part. Nina tells Franco she saw Carly and Sonny locked in a kiss, he wants to know exactly what she saw. She recaps the kiss – they were talking intensely, Sonny looked upset.. but who kissed who? She tells him Sonny kissed Carly.. and Carly responded. Nina tells him she wheeled away and apologizes for not telling him before. She insists it probably meant nothing, but for Franco, the only thing that would make him feel better would be to “kill the son of a bitch”. Franco attacks the elevator door in anger, and Nina gets out of her wheelchair to stop him! He is stunned.. “you’re taller”. She tries to pretend, but he isn’t buying it.. the question is why she wants people to think she can’t walk?? Nina says the story is hers alone.. and would appreciate Franco keeping it to himself. He is more worried about Sonny – “that gangster has got to go”. Nina says the kiss might have meant nothing – suggests he talks to Carly first, before doing something stupid. He is also the first friend she has had in 20 years! The elevator door opens, the two are saved. Franco decides to go home and find out what Sonny was doing kissing his girlfriend.

Passions reignited
Carly tells Sonny he isn’t listening, but he argues she is being stubborn. Intensely stares and says he knew what he was doing when he kissed her – and whispers that he wants her! He thinks she is lying to herself, he needed to kiss her to wake her up to the truth. Carly argues they are doomed as lovers, but perfect as friends and wants him to respect her ability to make her own decisions. But he wants more than friendship! She tells them they have too much chemistry and are better as friends – they discuss Michael and Morgan, and he says he can’t ignore the terrible mistake she is going to make and the kids hate Franco. If she truly loves him, nothing he does would get to her – the kiss, the pull they have… nothing! Carly is angry at him and says she is immune.. they have no connection and it’s like the kiss never happened. He kisses her again!!!

Carly pulls away, she doesn’t want to do this.. she felt something (and dreamt about it) but doesn’t want to think about him. It can’t happen because of Franco. She insists she has made her choice – “enough” and tells him to go. But she quickly has a change of heart “Sonny. I want you to stay”, and kisses him passionately.

Levi on the run
Levi and Scribner force a wet and bedraggled Maxie and Lulu inside a cabin and they ask “now what?”. They insist Dante and Nathan will find them.. and “blow their stupid heads off”. Levi says they can’t get rid of them that easily – they are going to be together for a while!This Week Spoilers
Next Week