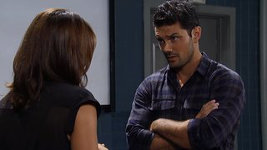 Dinner is on!
Michael and Kiki accept the dinner invite from Ava, and when he finds out it’s at her place, he reminds Kiki the penthouse is where AJ was shot. Kiki suggests they cancel, but Michael thinks it might help him move on, as he had no closure, even though the supposed killer (Carlos Rivera) is in prison. There was no justice – the killer should be rotting in the ground.

When Ava returns from grocery shopping, Julian reminds her to be careful when going out because of Sonny, but she is more concerned about Fluke. She needs to keep Kiki safe, even if that means Michael has to die. He asks how she is planning to kill him, and she shows him a small container of a poisonous powder.. “something sutble”. A powder derived from toxic oleander – she will mix it with a bittersweet dessert. The effects start 6-8 hours later, slowing the heart which leads to paralysis and death. She wants it to be painless so he doesn’t suffer, and will be there for Kiki to help her through it.

Michael and Kiki arrive for dinner, and he insists to Kiki that they stay. Ava admits she ordered in but made the desert herself, and ushers Julian out, whispering she mixed the oleander into his chocolate mousse.. “death by chocolate”. Ava watches Michael while making small talk about the pregnancy.. she knows it’s an awkward situation, and he tells her at the end of the day the baby will be part of his life, no matter who the father is. Ava is touched. Kiki jokes that she is serving all his favorites – “like you cooked him his last meal”. He is quiet, and wonders where the shooting happened. Ava swears she had no idea Carlos was going to rob the house, and Kiki doesn’t blame her.

Sonny lends a hand
Dante stops by Sonny’s office, and asks for a favor.. he tells him Maxie and Lulu were kidnapped last night and asks if Sonny can help find them. He hopes Sonny might know someone Levi would have contacted locally, to sell the jewels. Sonny remembers someone setting up a business selling stolen artifacts – it was Coleman! Sonny thinks Levi would have contacted him.

Ned and Olivia enjoy drinks at the Floating Rib after their movie date, and Liv expresses concern she hasn’t heard from Dante and Lulu after offering to help during the fertility treatment. The two enjoy some flirty banter, he liked that she chose ‘Guardians of the Galaxy’ and she reminisces about her childhood in Bensonhurst with Lois and Connie. Ned shares his personal history with Monica and the Quartermaines, and Liv says she is happy as it led him to Lois, and their movie date..as friends.

Still tied up
Maxie secretly cuts the ropes keeping her tied up and in a panic, asks Levi what he did with Lulu. When he places his gown down, Maxie reminds him karma exists for shooting Mac, an unarmed man.. when he isn’t looking, she knocks the gun to the floor. Lulu returns with Scribner, and when they’re about to tie her to the chair, she grabs Levi’s gun from the floor and points it at them! Levi removes the gun from Scribner’s pocket and lunges at Maxi, telling Lulu to drop the gun or he will shoot her in that donor heart of hers. The two girls are tied back up… and Maxie admits it was all her fault. She blames herself, and Lulu says they are in this together, nobody suspected Levi was con artist and thief, and Lulu reminds her they still don’t know what he is capable of. They have to be strong together (plus it’s Georgie’s birthday). Lulu says they need to get tough.. and suggest Levi release them since they have the jewels. Scribner says they need to complete the transaction with the buyer before they can let them go, but Levi says he has no intention of letting them go!

Levi mentions the buyer should be here shortly.

Fighting over Nikolas at the station
Britt and Liz hover over Nikolas at the police station while he worries about the girls. Nathan is there, working the case – a body is pulled from the water, but it’s a jumper, not either of the girls. Nik wants to know if there is evidence they haven’t survived – Nathan is frustrated and Nik is also very worried. His private team hasn’t found anything.. he tells Liz he wasn’t alone when she called. He explains Britt was there, staying in the guest room – Liz stops him, and rushes to call her grandmother.

Britt comforts a worried Nathan and asks about his feelings for Maxie, and he admits the truth. He is scared but Britt suggests talking a page from their mother’s handbook – they never back down from adversity! He thanks her, then receives a text from Dante, following up a lead at the Floating Rib.

Coleman and the Aztec jewels!
Coleman tells Liv and Ned about Mac being shot and the kidnapping. She is frantic and just when Ned offers to drive her to the station, Dante shows up, pinning Coleman to the pool table! He grills him about his customers – Scribner and Dunkleman – and Coleman says he didn’t know anyone was going to get hurt or kidnapped! Scribner had approached him about making a play for Felicia’s Aztec jewels – he was just in it for the profit, and was waiting for them to call. Dante wants to know when the sale was supposed to go down. Liv is angry at Coleman – if they don’t find Maxie and Lulu, she will make him wish he was dead!

Britt and Liz face off at the station, and Britt tells her she was about to have sex with Nikolas when Liz called!

Nathan an Dante arrive at the safe house and break down the door – “oh god”..

Ava arrives with the dessert tray.This Week Spoilers
Next Week