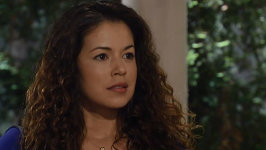 Sonny tells Shawn!
Shawn returns to work after another night with Jordan, telling Sonny about the 2 week affair, and that T.J. doesn’t know about it. Sonny takes it well, reminds him not to leave himself vulnerable, and that while he was in bed with Jordan, Sonny was in bed with Carly! The talk about the Franco problem… “he’s a lunatic”, and has information that could damage Sonny. Shawn asks if he wants to take Franco out.

Jordan wants in
Julian gets a call from Fluke, who tells him of his conversation with Ava. Before he can hear what Fluke has to say, Jordan walks in! Fluke signs off while she asks who he was talking to online? She guesses it was Luke Spencer, as she recognized his voice when he called Mickey’s phone (after he was shot). She asks if Luke is their boss, and Julian bursts out laughing. But Jordan is smart and tells him she saw him and Luke at the gallery with the briefcase of cash. Julian swears on everyone he holds dear that the man of the phone was NOT Luke Spencer, and he won’t discuss it any further. Jordan says she wants to play with the big boys, but Julian warns her off.

Bpbbie grills Carly
Sony texts Carly, wants to know if everything is okay, while Franco continues to apologize for not believing her and Bobbie’s story. She reminds him that she pushed Sonny away after the kiss, and he wants to make it up to her when he gets home from work. After he leaves, Bobbie wants to know what the hell is going on between her and Sonny? She is worried, and wondering why Carly is sneaking around behind his back. Carly admits to leaning on Sonny, pushing him away after the kiss, and while things were different last night she told him there would be no “us”. Bobbie asks if she meant it? Carly says she thought she was behind their attraction, and to Sonny, the wrong has always been right for them. Bobbie doesn’t want her to make mistakes, both men are volatile.

Silas and Sam make a discovery
While Nina tries to text Franco, Sam appears at her door – she needs t speak with him in private. Nina tells her it isn’t ok, Sam is in her home, wanting to speak with her husband! Sam says it’s none of her business, but Silas is able to usher her out of the house. When they are alone, Sam tells him Patrick has asked her to find out who put Rafe up to the accident. She asks Silas if she can look through Rafe’s belongings, and they find $500 in Rafe’s wallet. Silas remembers questioning him about the money, and Sam recalls Rafe coming back to Silas’ place. Maybe he got the money from Nina? Sam wonders if Rosalie had cash, and Silas gets annoyed and jumps to Nina’s defense.. they agree to avoid the subject for now, and Sam turns on the phone.

Sabrina is back!
Sabrina arrives on Patrick’s doorstep, having just returned from Puerto Rico. She asks about Emma and he invites her in. She’s feeling better after a long break, and it’s time to get back to work – Patrick tells her Obrecht fired him, and is appealing to the board to get his job back. Sabrina is shocked, but he tells her everything that happened with Rafe, and that he caused the accident. She is angry he didn’t tell her sooner, but he explains he didn’t know how to handle it. He tells her the full story of the accident and the surgery, how he did everything he could to save Rafe. Patrick shares the news that someone put him up to running them off the road, and he has asked Sam to get to the bottom of it.

Ned and Alexis catch  up
Alexis runs into Ned at the hospital, finds out he why he kicked Tracy out of the house (still being in cahoots with Fluke). She trusts him to handle things properly, and he asks how she is doing since the fire at the house. Alexis says she has been numb and can’t process it, and tells him they suspect Mickey Diamond planted a bomb. Ned is surprised and shares the news about Alice’s heart, mentioning they should thank Jordan for shooting him. Alexis tells him that Julian never left the business after all, and she broke things off with him for good. Ned says she deserves better.

Keeping secrets
Nina and Franco run into each other at the hospital – she asks him about confronting Carly, he tells her what happened when he got home. She reminds him how Silas was cheating on her, but hey.. he has nothing to worry about (planting those seeds of doubt!). They agree to continue keeping each other’s secrets.

Carly bursts into Sonny’s office, saying they have to talk!This Week Spoilers
Next Week