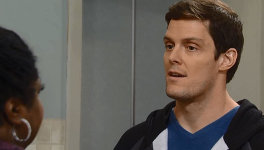 Liz continues to watch over John Doe, and she tells Epiphany his name is Jake, but it’s just a guess. Epiphany says they may learn more when he wakes up – before she heads out for her date with Milo, she asks what happened with Nikolas. Liz tells her they wont’ be together anymore, but Epi reminds her life is full of surprises, love might be just around the corner.

Milo arrives to pick up a glam Epiphany for their date – it’s a surprise, and he tells her she might be shade overdressed. He ends up taking her to the boxing gym!

Jake and the police
John Doe wakes up and tells Liz he doesn’t remember anything yet, but the name Jake still feels right. No progress has been made yet on figuring out who he is, but Liz says there might be another way to find out who he is! She mentions the police can run fingerprints, but he doesn’t think it’s a good idea as he doesn’t know who or what he is. She thinks it might be his best option – does he want her to contact them? He says he’s not comfortable – he has a gut feeling that he has something to hide. No one has come forward, and he didn’t have ID.. Liz says she understands why he might want to start with a clean slate. She apologizes for romanticizing about having no past, and asks what if he has a family who misses him and wants him back? He agrees it wouldn’t be fair and says “let’s do it”

Sam and Patrick wait for Tracy
In Amsterdam, Patrick and Sam sit down in the Cafe where Tracy is supposed to meet Luke. She is distracted and he asks if she is thinking about Silas? She says she now feels vindicated about Nina, but it doesn’t really matter anymore – Nina destroyed her relationship. Patrick asks what she would do is Silas divorced Nina? She can’t think about because she is so pissed – he put Nina first time and time again. It was difficult situation, but she proved she was ready to move on with her life – she gave up Jason for him! He apologizes for bringing it up, and they decide to focus on Luke when Tracy arrives.. “I’m here”. Tracy tells them she stopped a coffee shop and had a space cake – they tell her the pastries are filled with cannabis! She says she didn’t eat it, but it’s in her purse.

Nina pulls Silas into a supply closet!
Nina tells Silas she called Nathan but hasn’t got back to her, so she came to visit him. Does he want to work on making that baby of theirs? He is hesitant, so she asks “unless you don’t want to make love to your wife?”. He says he can have lunch, but a quickie is another matter, the hospital is a public place, and things are different now. But she wants him now and won’t take no for an answer. She pulls him into a supply closet and starts to kiss him – he tells her to stop. Nina accuses him of only sleeping with her because he felt pity.. he tells her she is beautiful, and she says she’s an idiot. He is cheating on her, but with who? Is he sleeping with Ava Jerome or Sam?

Maxie tells Lulu about her date
Lulu is at the boxing gym with Rocco when Maxi rushes in, Lulu asks what’s wrong and she says “Nathan”. She tells her she went on the date, and it was amazing.. everything went perfectly, there wasn’t one awkward moment. But it was an unmitigated disaster. Lulu asks what happened, Maxie tells her Judge Walters harassed them – if they went on another date, she would never see her daughter again. She can’t see him until her custody hearing in December. They see Milo & Epiphany having fun at the gym..

Milo and Epiphany’s date
Milo starts showing Epiphany how to box, when she stops – she asks him why he brought her there? This isn’t a date, he wants her to lose weight. She says it’s a scheme to get her to look the way he wants her to look. He says he has been taking her places that HE likes, it has nothing to do with her. He apologizes and say he worries he isn’t good enough for her – she is beautiful inside and out. He wouldn’t change a thing.

Obrecht is released!
At the station, Nathan stares at a key when handcuffed Liesl is brought in – she has been asking to see him, but he replies he has been busy and doesn’t have much to say, unless she tells him why Anna has her there. What did she do? The officer pulls Liesl away, when Dante arrives – he asks what happened on his date with Maxie? Dante wants to know everything! Nathan says Maxie took his breath away, she was so beautiful – except it didn’t work out because of Judge Walters. Dante says there is a way around this, he can see her in private.. Nathan doesn’t want to be the reason Maxie can’t see her daughter. Just then, he sees Liesl being released! Nathan is shocked, and asks what Anna was going to charge her with? Obrecht tells her she shot Victor Cassadine – his father!

Maxie tells Lulu she doesn’t know how to fight this, and Lulu suggests she contact Diane to find out her options.

Nathan asks Liesl if she murdered his father, she says no – Anna making her suffer is the “icing on the pie”. She says she did it for him – Victor was a dangerous man. So long as he was in his life, he would never be safe. Nathan is angry, but Obrecht says she loves him and always will – he asks why she gave him up at birth?

Silas tells Nina he has a lot on his mind – his focus has to be on his patients, its not because he isn’t attracted to her. He tells her Ava was his mistake not hers.. Nina says if he hated her, she doesn’t know what she would do. He says there is nothing she could do that would upset him – they hug, but Silas looks serious.

Liz introduces “Jake” to Dante, who has brought a fingerprint kit – he will run his prints through the system and get back to them with the results.

Tracy receives a text from Luke, he is 5 minutes away. The door opens..

Nina leaves the elevator, and Silas heads to the nurse’s station – he wants to talk to Travis in Physical Therapy, about Nina’s condition.

Epiphany returns to Milo all dressed up, and they happily head out for dinner.

Lulu tells Maxie to take action, but she decides to just sit there – Lulu heads to her kick-boxing class, and Maxie bumps into Nathan on her way out!

Liesl knocks on Nathan’s front door, asking for 5 minutes.. when someone else opens the door.. it’s Madeline!This Week Spoilers
Next Week