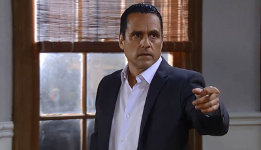 John Doe is lying in a hospital bed after 36 hours of surgery, with his face bandaged. Liz enters and tells Epiphany she promised John Doe she would be there when he woke up. Epiphany says his face has been completely reconstructed, but they don’t know if he is going to recover – they need Patrick to look at the scans.

Sonny confronts Julexis
Julian leaves a message for Ava.. tells her Luke tried to have Michael killed last night. He climbs back into bed with Alexis, and tells her she needs to call Ned to tell him she’s through with him – he wants her ALL to himself. But she does need to call Sam and Molly, goes into the living room and sees SONNY sitting there. He says he hopes it was worth it, as now it’s time to pay. Julian walks in and Sonny tells him he wants answers about what he tried to do to Michael last night. Shawn arrives, and Alexis says this is ridiculous.. Sonny says he failed at his retaliation. Julian insists he had nothing to do with any attempt on Michael’s life, but Sonny accuses him of lying. He wants to know what proof Sonny has..

Kiki hears about the shooting
Kiki wants to know why Michael has a guard at his front door? She sees blood on the carpet, and he tells her it belongs to the man who tried to kill him last night. He is being protected by Sonny, and has accepted his world. Kiki says it’s not normal, wouldn’t it be safer if he wasn’t a Corinthos? Michael says it’s not an option, they are his family. He wants to know why she has a problem with his father, all of a sudden? She says he’s only okay because Shawn showed up.. but he tells her Rosalie was there and helped as well! He says they would have died had it not been for Shawn.

Maxi looks for answers
Morgan answers the door at the brownstone.. it’s Maxie! She wants to talk, notices gourmet muffins on the table and asks if he has company? HE says it’s for Kiki, who isn’t there, so Maxie takes a bite.. she tells him she is there to apologize for the sit-in with Peter/Levi. And never should have fallen for him. He wishes her good luck and asks if she can go on the date with Nathan tonight? Morgan has NO idea who or what she is talking about. She is confused about her own feelings, and needs him to tell her what to do. He reminds her they both jump in too quickly, but also need to allow themselves to love other people, and to be loved. She needs to look for answers within her own self.

Anna, Nathan & Jordan chat
Nathan visits Anna in her office, and asks why his mother is still in custody? Anna says she hasn’t been charged yet, and commends him on how he has handled everything, including Victor – Nathan wants to put everything behind him, but wants to know if Obrecht did anything at the clinic? They are interrupted by Jordan, who needs to talk about legitimate police business. Jordan tells Anna and Nathan she wasn’t driving the car that hit Jason. Her job is to take down the Jeromes, and they need to trust her – and explains that Ava now has a target on her back. If Sonny finds her, he will execute her – she was there when they tried to kidnap her, and Shawn was leading the operation. Anna asks if she will testify against him?

Samtrick at the hospital
At the hospital for Danny’s appointment, Sam and Patrick talk about going to Amsterdam to find Luke.. she thanks him for helping out. He points out the trip could be quite dangerous, but she reminds him how tough she is, and that she IS going. Silas seems them together, and takes Danny in for his appointment.. and wishes Patrick luck with his appeal.

Liz asks Patrick for help
Elizabeth runs into Patrick and says she has a job for him! There is a patient in ICU and she wants his unofficial opinion. Obrecht is in custody, so they have time. Patrick looks at his scans and sees scar tissue from previous brain surgery. He needs to examine him more, but there is no obvious sign of brain injury – they will know more when he wakes up. He asks Liz why she is so invested in the patient? She says he is all alone.

Sam tells Silas she moved Danny’s appointment as she had a trip coming yet. He asks if Patrick is coming with her.. and are they a couple now? She says there is nothing go on between them, and they have a good lead – she can’t tell him yet, it’s a just a theory. He gives Danny a clean bill of health, and she thanks him. She tells him she will let him know what they find out, he says she should keep in touch anyway.. and tells her to be careful. Back at the nurse’s station, Epiphany tells her Patrick is looking at a patient.

Jordan tells Anna she was been intimately involved with Shawn – she didn’t mean for it to happen, but it did. She is worried it will compromise the operation – she doesn’t know what to do, but can’t bring herself to get out of it.

Julian tells Sonny it wasn’t him, and Alexis interrupts, telling Sonny he didn’t do it – because if HAD proof, he would have killed Julian by now. She yells at him to kill Julian now.. the only person who can save her grandchild if he gets sick again. Jason’s son! Sonny says he will find a donor match for Danny, and won’t be able to hide behind Jason’s son anymore. On his way out, he fires Alexis.

Maxie runs into Nathan, and tells him she is there to give him answer in person.

Michael tells Kiki Rosalie wasn’t there to cause problems, just to aplogize – and as it turns out, the sectret Kiki was keeping from him wasn’t something that would hurt him.

Anna tells Jordan things are only going to get worse unless one of them walks away from the “job”. One of them has to budge, ot they will both pay a high price.

Sonny wants to get Jordan alone to see what she knows.

Sam and Patrick look for each other in the hospital.. while Danny runs into John Doe’s room! Sam sees him holding his hand..This Week Spoilers
Next Week