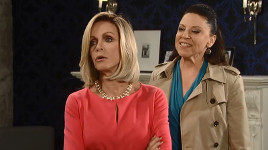 Spencer prepares a welcome home surprise for Britt and has a heart to heart with Nikolas. He mentions it took more than just talking to get him to forgive Britt, when Nik asks what he means, he quickly recovers. Nik tells him that she hurt him very deeply before, but deep down he believes she is good person, and means a lot to Spencer.. who wants to know if she is going to stay forever this time? Nik says he needs to start trusting her – if she is honest, maybe it will work. Spencer asks if he will ask her to marry him again..they can be a family?

Dante runs John Doe’s prints in the system and he comes up with a quick match! The prints belong to a criminal..

Liz and John Doe don’t recognize him
Elizabeth stares at John Doe’s face – she is pleasantly surprised and says he has a Brad Pitt thing going on after the reconstructive surgery. After the plastic surgeon leaves, he asks what he really looks like – does she recognize him? She doesn’t but gives him a mirror.. but he doesn’t recognize himself. An orderly quitely comes into his room, then leaves. Liz holds his hand and says it’s normal that he doesn’t remember – maybe Dante will have the answer. John Doe wonders if there was a hit on his fingerprints? And why was he standing in the road with no ID..? Maybe he did something terrible.

A suspicious orderly
The orderly makes a call to Helena saying Liz doesn’t know who he is and he still has no memory, what does she want him to do? Helena wants to be contacted right away if he remembers anything.

Nina bumps into Britt and calls her a clumsy oaf! She apologizes, and Britt asks if she talked to a psychiatrist yet. Nina tells her she doesn’t need to – Britt was wrong, she got a second opinion and can actually give Silas a child. Nina also tells her it’s none of her business and storms off.

Silas hears it all – ENOUGH!
Travis begs Silas not to tell Obrecht, but he says to has figure out what to do with his wife. Nina corners Travis when he leaves and asks what happened with Silas, but he runs away from her. She walks into Silas’ office and he tells her they had a very interesting conversation. She tells him what a great help and how grateful she is to him – Silas says she should be grateful, as he was been lying for her dine the day they met. He yells “ENOUGH”, he knows she could walk since the day she wheeled into Port Charles. She was never fragile or helpless, she has been lying to him with every breath. How can she explain it? She says she was afraid, and then gets angry back at him – she had to pretend she was weak so they could reconnect, she hadn’t seen him for TWENTY years. She turns the tables and reminds him about his affair with Ava. He said he felt trapped when she had to move in… and while he could have forgiven her all the lies, he can’t forgive her for destroying him and Sam.

Silas is angry he didn’t see it… Nina tells him she isn’t sorry, she work up from a 20 year coma to see him frolic all over town with his mistress. He finally figures out she was the one who overheard Sam tell him about Patrick – she finally says “yeah. I did all those things you’re accusing me of”.

Jerry wants ELQ
Tracy assumes Jerry wants money in exchange for Luke, but he actually wants ELQ. She also accuses him of working with Julian, and he says it’s true.. but ELQ isn’t hers anymore. He finds out that Michael is now running the company – Sonny’s son. She only controls 9% but can get more from other shareholders – will he accept the deal? Before she shakes on it, she wants to know where Luke is. Jerry will only deliver Luke when she gives him the stock certificates. Sam and Patrick say it’s a bad deal, but Tracy takes it.

A homeless Madeline
Madeline is about to tell Liesl what’s wrong with Nina, when Nathan arrives – he’s upset Madeline let herself into his place, but also that she is out of prison! She says she is back to try to make amends with him an Nina. Nathan accuses her of stealing the best years of Nina’s life, and the baby.. she tells her to get out. Madeline tells him she is homeless and penniless, and tells Nathan that Nina has controlled the family money ever since she work up.

Brad and Britt
Brad tells Britt all her belongings are gone from their place as she is moving back in with Nik. He reminds her that he can never find out that she was in on Spencer’s disappearance. He will miss her as she is his best friend, but she reminds him they will see each other at work, and still have their Movie Mondays. She leans her head on his shoulder.

Sam and Patrick warn Tracy that it’s a scam – and remind her about the undercover agent hearing Luke’s voice. It wasn’t just the agent, it was also Spencer.

Dante enters John Doe’s hospital room.. he ran his prints, and there was a match. But there was also a glitch. It was a false alarm.

Nathan finds out Nina didn’t need to move in with Silas.

Nina tells Silas she did everything because she loves him and was trying to save their marriage – he says the marriage is over. He’s done.. and walks out. She slumps to the floor.

Britt loves her welcome home surprise and hugs Spencer – Nik says he is happy she’s back, and Spencer leaves them alone. They start to passionately kiss..

Tracy is going to give Jerry what he wants.

Jerry muses to Helena that Tracy believed everything he said..

Helena tells Jerry she had Jason’s file removed before they had a chance to ID his prints. No one suspects who he is..This Week Spoilers
Next Week