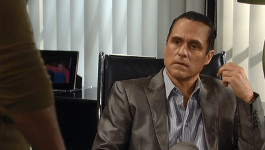 Bobbie and Lucas meet with Maxie about Carly’s wedding…she tells them how Judge Walters has split up her and Nathan. Carly arrives and Maxie asks her if Michael will be at the wedding. They argue about what Franco did in the past (half the town hates him, according to Maxie), but they apologize to each other. Josslyn shows off her wedding outfit.. she is dressed as an ear of corn! She informs Carly she will be trick or treating on Halloween.. not attending that joke of a wedding. If she marries anyone, why doesn’t she re-marry her dad..?? She just doesn’t want it to be Franco. She would even take Uncle Sonny. Maxie and Lucas take her away to change, and Bobbie tells Carly she hopes she is through with Sonny.

Sonny needs to find a fall guy
Sonny and Shawn need to find an enemy of Franco’s to take the blame for his death, and discuss a plan. He wants to stop worrying that Franco is going to tell Michael he shot AJ. Shawn says there is no shortage of people who hate Franco, even Maxie Jones, but Sonny says it has to be someone who deserves to take the fall. He knows someone who would take the fall for it.. and it is no loved-one of his,.

The violent truth about Nina
Nathan calls Nina – he needs to talk to her. Madeline tells him she is telling the truth about Nina, and there are things he needs to know. When she was young she was spoiled, had tremendous mood swings and anger.. irrational and occasionally violent. She even pushed Madeline down a flight of stairs. Nathan doesn’t quite believe it.. Madeline says she took steps to have Nina committed, and that’s when she ran off to marry Silas. Nina manipulated Silas into believing her family didn’t want her.. and he still doesn’t know her true nature. Nathan says it’s only half the story, and leaves to go find her.

Silas confronts Nina
Silas comes home to Nina, she tells him it was all Rosalie’s idea to pretend she was in a wheelchair. He asked if it was alos Rosalie’s idea to pretend she was broke? She says all she wanted was for him to love her.. it’s a joke considering everything he has done to her… “you son of a bitch”. She is furious and yells at him about Ava, and starts to cry about the baby and the coma. She says he left her stranded for twenty years. she tells him she trashed his apartment the night of the engagement party, and enjoyed every minute of it. He knows about her list and wants to know what she’s up to now? Silas says he knows it isn’t fair, and he will do anything he can to make it right – they need to talk to someone. She tells him Britt suggested she see Kevin Collins because of her menopause. He thinks it would be good to talk to someone, and he will go with her. She tells him to let go of her arm.

Be my Best Man?
Michael tells Franco about the center in AJ’s name, and Franco reminds him how far apart they were in the past. He hopes they can be as close as him and Sonny. He reminds him that Sonny held back on retaliating against AJ because of his love for Michael.. then asks Michael to be his best man! It would be great for Carly. Michael reminds him of his past in prison, and Franco says it’s difficult for him too. He hopes Michael can put some of his feelings aside, it would be a great gift for Carly if he would endorse them as a couple. He agrees and Franco is thrilled!

Ava is in labor
Ava thinks she’s going into labor.. she tells Kiki that Sabrina gave her the pills accidentally. Assuming it was an accident. She thinks Sabrina might have resented her, but refuses to go to the hospital, and says Britt (her doctor) will be followed by Sonny’s people. Morgan suggests they find another doctor, and Kiki suggests her dad.. she is certain he won’t talk. She leaves to go look for him.

Felix greets Sabrina at the hospital. she tells him she might have been wrong about Ava causing the accident that killed Gabriel. She told him she gave Ava the wrong medication on purpose…Felix says they need to stop it. Sabrina is horrified at what she’s done, Ava could go into premature labor and it’s all her fault. She doesn’t know how many pills she took..

Morgan tells Ava everything is going to be all right.

Kiki walks into Silas’ apartment, and he’s lying on the floor, unconscious!

Madeline leaves a message for Nathan to be careful – she is afraid of Nina and doesn’t want him to become the target of her wrath. There’s a knock at the door.. it’s Nina!

Bobbie tells Carly it’s not too late for her to change her mind about the wedding.

Sonny decides they can pin the murder on Heather!This Week Spoilers
Next Week