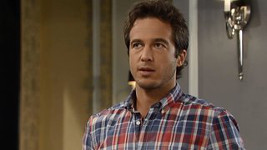 Lucas and Bobbie chat about her fight with Carly over Franco when Brad arrives. She is thrilled and wants to get better acquainted with him, and Lucas invites him to Carly and Franco’s wedding. Bobbie chides Lucas for not working, and suggests she and Brad could help him find a job at the hospital – she tells him that Lucas has four years of medical school! Brad wonders why he made the choice not to use his degree, and he says he can never measure up to Tony, who was a brilliant doctor. He’s not sure he can save lives – Brad tells him it’s his own decision, but he finally agrees to talk to Liesl about it.

Olivia has a vision!
Carly snaps at Metro Court staff, Olivia tells her she is over-reacting, and knows she is secretly lusting after Sonny. Olivia chuckles and says she recognizes the signs in Sonny, but Carly reminds her she is marrying Franco. Liv calls him a freak show – he belongs a loony bin with that deranged mother of his (while Franco is watching via the necklace!). She tells Olivia to shut up and stop worrying about whether Franco is like his mother, when Olivia sees Heather standing there with a knife! She screams when Sonny arrives – she tells them Heather is going to try to kill someone. This is her first vision in months, Carly says it’s her imagination – Olivia understand their doubt, but her premonitions always come true.

Sonny and Shawn discuss breaking Heather out of Fern Cliff and offing Franco, making it look like Heather did it. They need to make sure Carly knows nothing about it, and after Franco, they need to find Ava.

Franco and Heather talk wedding plans
Heather questions why Franco would still marry Carly, he tells her about the hidden camera – he has footage of the two of them having sex. Heather calls him a genius but doesn’t want to see Olivia. She’s like a cockroach, and didn’t even die when Heather injected her with LSD. Franco reminds Heather she is the mother of the groom and he has to have her at the wedding. Both his father and Bobbie will be there as well, he asks her to be a witness when he gets back at Carly – he tells her to leave the details to him. She’s doesn’t know how he is going to get her out, but Franco says it’s under control and she needs to be ready tomorrow. What does he want her to do? He has prepared a video presentation not to be missed – it will ruin Michael’s relationship with Carly and Sonny. After that, they will have the day to discuss Carly’s fate.

Sabrina defends Carlos
Michael asks Sabrina, if it wasn’t Carlos Rivera, who killed his father? She just knows Carlos didn’t do it, despite his confession. She insists he is telling the truth – and he was trying to protect her from Ava Jerome! She got him to confess by threatening her and the baby – she never admitted to shooting AJ, but Carlos knows she wanted him dead. She doesn’t have any more answers, but Michael remembers that AJ was killed in Ava’s penthouse while she was supposed to be away in New York. Sabrina leaves, Michael thanks her.

Silas helps Ava
Ava wants Silas to stop her from having the baby too soon, he asks about the contractions. He wants to know more about the pregnancy, any complications? He gives her a needle to try to stop the contractions, but also speed up the baby’s lung maturity in case it is born early. Now they have to wait and see, and Ava is relieved.

Nina offers Madeline money
Nina tells her mother she will make Ava’s baby her own as she doesn’t deserve to have it. She asks Madeline to help her help herself to Ava’s baby, but Madeline says no, it isn’t right. Nina reminds her about the coma – and offers her money since she now controls her fortune. Either she helps her for money or gets a job! Nathan suddenly arrives home and Nina tells her to get rid of him – she hides, but he asks Madeline why the chain is on the door? ‘Because of Nina’… in case she shows up. He tells her Nina attacked Silas, and he needs to keep looking for her. Madeline tells Nathan to wait… but then wishes him luck looking for Nina. He tells her not to let her in.

Silas asks who Ava is hiding from, but they can’t tell him – he says no one will hear it from him. Kiki thanks him, he replies he is her father and will always be there.

Liv asks Sonny how he can be so cool about Carly marrying Franco? He tells her he doesn’t think the wedding is going to happen.

Franco arrives at the Metro Court.

Heather is led back to her room, musing how nice it would be to to enjoy Halloween instead of being locked up… as they leave, Shawn is lurking in the hallway.

Silas tells Kiki they are tracking down Nina, when she receives a call from Michael – he has to talk to her about her mother.

Nina applauds Madeline, and asks if this means she will help Nina take Ava’s baby? Yes, I will.. then Nina hugs her.This Week Spoilers
Next Week