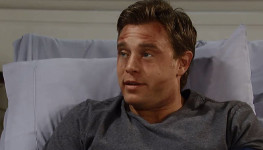 Liz brings Jason his breakfast, and he informs her he doesn’t want any medication – he also remembers hearing 2 voices after the accident, but Liz suggests it may have been the police. It will come back to him if it’s important. She blames the bad food on Liesl and says she despises her when Liesl walks in – did someone mention my name? Liesl brushed her off, introduces herself to Jake/Jason and asks if he has insurance! Liz argues that everyone deserves care, but according to Liesl, in the case of “Herr Doe”, the hospital has more than provided, and she won’t allow him to stay in the bed getting soft and flabby! He gets up to leave, but Liz pushes him back, and Obrecht says she was merely encouraging him to hasten his recovery. She reminds Liz she fired her once and gives her a warning.

Liz tells Jason about the shooting
Liz tells Jake all about Liesl – how she came to Port Charles as the right-hand woman of international terrorist Cesar Faison.. the man who killed Jake’s father. She explains what happened, but all they know is what Faison told them… she believes Jason was still alive while he was in the water. It was two years ago today.

Samtrick is home
Alexis and Danny welcome Sam and Patrick home. Alexis wants to know if they received confirmation that Luke is Julian’s boss? She hears that Jerry has been working with Julian.. and is holding Luke captive for ELQ stock. Sam says there are still unanswered questions, and Alexis flashes back to Julian telling her Luke is not her boss. She needs to tell Ned that Tracy is about to give her stock to Jerry.

Kiki continues to worry
Morgan and Kiki are relieved the worst is over for Ava, and she tells him Michael thinks Ava is responsible for AJ’s murder. Morgan has doubts that Sonny did it, and wonders if Ava is throwing suspicion on him to protect herself? Kiki asks why would Sonny keep her captive then – she says Michael won’t stop until he finds the truth. She hopes Anna doesn’t re-open the investigation – it will destroy Michael if he finds out Sonny killed AJ. Morgan says they’re screwed, Kiki says she has lost track of how many secrets she has been keeping from him.

Michael speaks to Anna!
Michael approaches Anna having breakfast in the Metro Court – he wants to talk about his father’s murder, but she says the case is closed, Carlos confessed. She finds out Carlos is now saying otherwise – he confessed because he was threatened by Ava Jerome. He explains what Sabrina told him, he hopes it’s enough to re-open the investigation. Anna understands his concern, but Ava has an alibi for the night – Michael pleads for help. She agrees to talk to Sabrina and may re-interview Carlor, she also has someone looking for Ava. He leaves, saying his father deserves justice.

Family breakfast at Kellys
Sonny and Liv have breakfast at Kellys with Lulu, Dante and Rocco. Liv is distracted by a photo of Ned and Monica at the Metro Court in the newspaper – the paper calls them a couple. Speaking about Luke, Sonny tells Lulu he is keeping an open mind when Tracy walks in. She’s back and informs them Luke has been framed by Jerry Jacks. She says it all makes sense, but Lulu has doubts – where is Luke? Dante wonders what Jerry would even want from Luke, Tracy tells them he wants ELQ. She is willing to give up her 9% and asks Dante and Lulu to talk to Michael about his 25.5%

Julian and Ned face off!
Ned is angry about the story in the paper and wonders where it came come.. Julian walks in and says “me”. He tells him there is nothing going on with him and Monica, but Julian says he will publish an ongoing series about him unless he stops seeing Alexis. If he wants to preserve his reputation, he will get the hell out of Port Charles. Ned is angry and says he isn’t going anywhere – he has his own company to run, but Julian tells him he doesn’t have a choice. Ned says it will take more than a few stories in the paper to intimidate him. The two face off and Ned asks if he wants to step outside?

Alexis walks in to see Ned and Julian fighting! She asks them to explain and Ned tells him Julian was trying to strong-arm him to leave town, by smearing his name in print. Alexis tells Julian she wants a word, they leave but Ned wants to know what she wanted to tell him about his mother? Tracy walks in and says she will tell him herself!

Samtrick – what are friends for?
Sam asks Patrick what he wants to do next, he feels like his hands are tied but thanks her for everything he has done for her. She says that’s what friends are for.. even sharing a bed, he asks? She laughs that it was no big deal. When he says goodbye, Danny toddles over to hug his leg, saying “Daddy, wait”.. Sam picks him up and says this is Uncle Patrick! She shows him Jason’s picture, and apologizes to Patrick, while Danny points to the photo. It was two years ago today, and Danny never got to know him.. and never will.

Sonny tells Dante and Lulu that he saw Spencer with Luke at AJ’s funeral.

Obrecht talks to Anna
Liesl wants to know how much Anna told him about what happened at Chrichton Clark, and says she doesn’t know the first thing about the situation – she did NOT murder Nathan’s father. She tells Anna she shot Victor, but it was in self-defense as he had a detonator in his pocket. She tells Anna he would have come after Nathan no matter what, and who is she to judge after what she did to Cesar?

Sam cries on Patrick’s shoulder, he says he understands what it’s like to lose someone you love. She feels like she didn’t have closure as she never had a chance to say goodbye.

Julian tells Alexis he can’t take no for an answer, when it comes to him.

Olivia tells Dante and Lulu she had a vision about Heather Webber – could Dante just check on her to make sure?

Michael walks in and tells Kiki and Morgan he spoke to Anna, and she agreed to look into the new information about Ava. He knows it puts both of them in an awkward position, but if Anna doesn’t find Ava.. he will.This Week Spoilers
Next Week