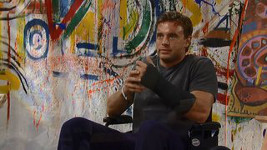 Madeline tells Nina that Ava is hiding in Kiki and Morgan’s brownstone. She recommends they wait until she gives birth, and tells Nina that Ava has been experiencing cramps. Obrecht walks in and says she is only helping her because of Nathan, and doesn’t want to know anything else. She has her own problems – one of her nurses gave the wrong pills to a pregnant woman. It could have caused premature labor. Nina bets the patient’s name is Ava Jerome.

Rosalie warns Ava
Rosalie arrives at Kiki’s – she needs to tell her something and asks to come inside. She tells Ava that Nina is looking for her… Kiki wonders if she could hurt her? Ava threatens Rosalie, who tells her to back off. She didn’t tell Nina where she was.. she is just there to warn her.

Heather talks to Shawn
Heather paces back and forth in a locked room when Shawn arrives. She wants to know when she is getting out.. soon, he says. He brings her a BLT from Kellys, and she thanks him.. she will insist Franco double what he’s paying him. Shawn is confused.. he finds out Franco was going to break her out, and asks Heather if she knows what Franco was planning? She says it’s a doozy.. but thinks Franco might want to keep it between them.

Franco meets Jason – ‘I don’t like him’
Franco asks if they were gossiping about Sonny – care to share? She claims she was talking about Jacks, and nervously natters on about Josslyn and the wedding. He introduces himself to Jake, and Carly asks what he has been up to all day? He lies, pretends he went to see Obrecht to get the day off. Jake decides to leave – Carly offers to push him back to his room, but Franco calls an orderly. He wished her luck and congratulates them.. Franco says “I can’t stand that guy”. She tells him she knows he changed the venue to The Haunted Star, but he thinks it’s the perfect place to exchange their vows. He wants to show everyone how much he has changed – he can finally says he loves her until death do us part. He may even show another video.

Michael shares with Sonny
Michael asks Sonny why he is visiting AJ, but Sonny says he is there for Jason. They reminisce about how much they miss him and how much he loved Michael. Sonny says prison is too good for Faison.. and Michael feels the same way about the person who killed AJ. But murdering AJ’s killer isn’t the answer – Sonny tells him to let the law take care of it. Michael shares the news that Carlos may not have killed AJ, he was taking the fall for someone else, possibly Ava.. he asks Sonny if he knows anything about who really shot his father? Michael wishes he could talk to Ava, and maybe Sonny could look for her? Sonny says he will try, Michael thanks him, especially since Carly is getting married this week. He knows Sonny still has feelings for her.. Sonny says you never know how things will turn out. He leaves Michael at the crypt.

Lord Ashton returns!
There’s a body bag at Tracy’s front door, Ned leans over to see who it is.. the man has a pulse, but it’s not Lulu’s dad. It’s HIS.. a drunk Lord Larry Ashton! He sits down and wants a drinks, but Tracy wants to know what happened to Luke. He doesn’t know how he got from Marseilles to Port Charles. Ned reminds Tracy that Jerry has all the ELQ stock and they still don’t know where Luke is.

Jason gets stronger
Obrecht wants to know where Jason is… hopefully not bothering Franco. He arrives back in his chair, and she tells Liz to take him back to his room… he asks Dr. O if she is worried about his insurance? She sternly corrects him, and he jokingly mocks her in German. Liz laughs and says he loves him for that.. and they share a look. She tells him about Obrecht’s obsession with Franco, who he has already met. He tells Liz he met Carly, and doesn’t know why she is marrying him.. he likes her. He thinks she is getting cold feet about the wedding. But before he goes back to his room, he asks Liz for help – he wants to try climbing the stairs. She helps him stand and they walk to the stairs.

Liz helps Jason climb the stairs! He tells her she made it all possible.. Obrecht looks up and asks what’s going on?  Jason throws his arms in the air – “I’m king of the world!”.

Tracy receives a text from Jerry – he promised to give back her husband, he just didn’t say which one!

Michael tells AJ he will find the person responsible and make them pay.

Shawn calls Sonny – he needs to tell him something about Franco.

Carly wants to know exactly what’s going on, Franco says all will be revealed… tomorrow is a big day.

Rosalie leaves, Ava worries she needs to find another place to say… but Kiki insists she is safe there.

Nina doesn’t want to wait, and asks Madeline to write her a prescription.This Week Spoilers
Next Week