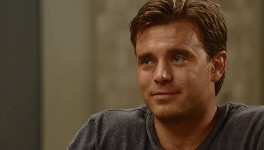 At the hospital, Jason jokes around with Dr O, who informs him he should be out of the hospital in no time. After she leaves, he tells Liz she has a beautiful smile. She gives him a cane and suggests he walk to the assembly room for the Halloween party, but first he gives her a present – a sketch pad and pencils – and asks her to draw him.

Anna figures it out!
At the station, Anna tells Julian Ava is a suspect in AJ’s murder – they believe Carlos was pressured by her to confess. Julian laughs and says she actually knows who did kill AJ,  and leaves. Dante and Anna discuss Carlos’ confession – she always felt he was holding something back, but who would Ava be protecting? Anna suggests Sonny, but it doesn’t make sense to Dante… she wonders why Ava shifted loyalties, and why Sonny turned on her? Anna realizes Ava probably knew Sonny killed AJ. Dante denies he would do that, and he also has an alibi – he was with Duke. Anna wonders if she saw Sonny shoot AJ… she doesn’t know what happened to make Sonny question her loyalty. Dante thinks she may be right.

Obrecht’s missing pad
Liesl asks Madeline who she has been watching, and where is Nina? She has an errand to run, but she didn’t go after her as she is capable of taking care of herself. Obrecht asks how long she is planning to squat there, she has work to do.. and where is her prescription pad? She expects it to be back on her desk when she returns – she has to go take out some trash now.

Nina injects Ava
Nina wants to have a chat with Ava.. “buckle up bitch”.. when Ava tries to flee, she grabs her and injects her with a syringe. A muscle relaxant that causes paralysis – her baby is fine, but she will be completely paralyzed. They have a lot to do in a short period of time. Silas calls Ava, but Nina grabs the phone and throws it against the wall. She thinks they have reconnected and yells that she is screwing with her husband – she will never lay eyes on her husband again – or her baby. Nina rubs her hands on Ava’s belly, she would protect the baby as if it was her own. The baby IS hers.. she owes her this baby as Ava ruined everything with Silas. Ava tells Nina her own mother is to blame, it’s not her fault – Nina says after she is done, Kiki is going to get hers too. She won’t hurt her physically, she is just going to dismantle her life, piece by piece.

Franco eases Carly’s concern
At the Haunted Star, Carly wants to speak to Franco alone – she knows about the recording that proves Sonny kills AJ. He tells her he was just being nosy and jealous, but she knows he wanted to get back at Sonny. He tells Carly that Ava got in his head, she was using him, but he realized he couldn’t trust her. He has made his peace with her relationship with Sonny. He’s glad Spencer caught him so everything would be out in the open. He tells her they can get past it, and Carly says she believes him, but he has to promise this won’t keep happening. He guarantees it.

Morgan hears the truth
Morgan is shocked to hear that Ava killed Connie… he tells Sonny he shot the wrong person after hearing Ava made him believe AJ shot Connie. Sonny explains how she killed Connie and also shot at Olivia by mistake – he had to keep her close to protect the baby. Morgan thinks he lying, but Sonny has proof. He plays the recording of Ava that Carly retrieved from AJ’s phone. Morgan breaks down, stunned that Ava killed Connie… Sonny says he had been played all along. He couldn’t tell them as he couldn’t lose them – Morgan insists he hasn’t lost him, he is here right now – father and son hug. Sonny tells hims he hates Ava, but her baby is their family and he has to protect it. But he doesn’t know where to find her.

Danny is tested again
At the hospital, Silas comforts Sam about Danny’s cancer diagnosis – they knew it was a possibility, which is why they continued testing him. First they need to run the tests again to make sure the lab didn’t make any mistakes. He tells her to call Alexis, bring Danny to the hospital and get in touch with Julian.

Alexis and Julian run into each other at the hospital, as they bring Danny to Sam and Silas.

The Wedding
Carly starts to walk down the aisle as Jossyln throws petals. Michael and Scotty stand beside Franco, Lucas hands Carly to Franco, and Lucy begins the vows… “dearly beloved, we are gathered here today”. Joss almost pipes up during speak now or forever hold your peace.. but Lucy continues on. TJ reads a sonnet about love, while the guests watch, then Lucy asks Carly if she takes Franco to be her lawfully wedded husband.. “till death do us part?”

Silas will put a rush on the tests, and Sam thanks him – “anything for you and Danny”.

Obrecht walks into Jason’s room and hands him his bill – she is discharging him.

Nina sees a text message on Ava’s phone from Silas – pretending to be Ava, she replies Morgan is back and she is OK. She tells Ava they are about to bring a new life into the world.

Morgan tells Sonny he knows where Ava is hiding – at the brownstone!

Dante can handle Anna’s theory about Sonny, but isn’t sure Michael will be able to.

Carly flashes back to Sonny’s admission of love.. and says “I do”.

Franco says “hell no.. why would I marry a lying cheating whore?”