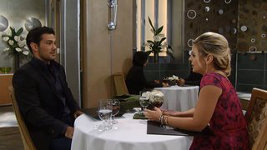 Maxie arrives for dinner with Nathan, looking beautiful in a red dress – he pulls out her chair, and says he has Madeline to thank for bringing manners into his life, as well as Nina. Maxie talks about all his good qualities.. when he surprises her with his wine selection and ability to speak French! He reminds her the point of the date to get to know each other.. he wants to share everything with her. She talks about her career in fashion, and he tells her about becoming a cop. Maxie tells him she likes what she’s learning about him.. “me too”. But she still worries that she can’t make decisions.

Franco and Nina hear it all!
Franco is stunned to hear Carly say she had sex with Sonny and starts throwing things – he is FURIOUS. They eavesdrop on Sonny and Carly and hear that Ava and Sonny had sex on AJ’s grave – Nina calls her a “creepy slut”.

Carly and Sonny talk – she feels awful, lying to someone she loves. He wants her to admit they belong together, and they talk about Ava. He regrets what happened, and feels terrible for what happened to AJ – that he took Michael’s father from him, when he “shot the bastard”.

Nina is shocked to hear Sonny confessing to murder, Franco tells her he already knew.. but now he has proof. Carly apologizes to Sonny for throwing AJ in his face, and admits she has been lying to Michael, and is filled with guilt for what she has been doing to Franco. Sonny asks if she has ever lost herself in him? He thinks what they have is deep love – nothing can touch it. They kiss again! Nina leans on Franco’s shoulder.

Monica’s date
A chipper Monica (who has dinner plans) sees Silas in the hospital, and thanks him for his help with Danny. Jason never knew Danny was his son, but he would be grateful if he was there. She is surprised to hear Silas and Sam are no longer together, but wishes them happiness. She asks if he has considered putting himself “out there” with online dating – she has her first internet date tonight. He explains he is currently seeing Nina, his wife, and tells Monica her date is a lucky guy.

Samtrick in Amsterdam
Sam and Patrick check into the Amsterdam hotel, Sam is quick to say it’s business! They knock on Tracy’s room and she is surprised to see them, but argue they need to be there. Tracy mentions Luke hasn’t been himself for the past few months, but doesn’t think he has been causing accidents and threatening children. But if the crime boss thing is true, she will tell them what they need to know… and she will know if he is lying. Patrick says if she doesn’t get answers, he will.

John Doe remembers Liz
John Doe wakes up, Liz gives him a sip of water, asks if he remembers and he speaks! “Yes, I remember”.. she tells him he has been unconscious for 3 days, and asks his name. He can’t remember his name, but grabs her arm when she leaves to get the doctor. She tells him she will be right back. The doctor confirms temporary memory loss is common, but John Doe says he remembers Elizabeth! She is puzzled.. he flashes back to her in the past, and says she is the one he is talking about. Liz tells John Doe she is flattered he remembers her taking care of him, but he flashes back to her voice saying she wants to be with him.. and more.

Patrick tells Sam he doesn’t trust Tracy, but says he does trust her. A bellman knocks on the hotel door – Sam wants to be shown to her room, but he tells them they are booked in the same room. Sam says it’s okay, she will stay with Tracy, who says absolutely not!

Monica meets Judge Walters for dinner at the Metro Court! She is a little nervous, but he tells her it’s a new world. When she mentions the importance of his role as a Family Judge  he turns around and sees Maxi having dinner with Nathan!

Nina and Franco turn off the camera – he says it’s the most depraved thing he has ever seen. And maybe it’s time to remind Carly and Sonny how crazy he used to be. Franco leaves the room, Nina runs after him.. she realizes she isn’t in her wheelchair, when Silas sees her standing in the hall!

Sonny tells Carly they should be out in the open – it’s time to tell Franco the truth and move on. Carly says he knows too much about what they did, but she loves him and wants to marry him. Carly doesn’t understand why she keeps coming back to Sonny, but says she isn’t pretending she loves Franco. She wants to love him.

Nathan tells Maxie she shouldn’t doubt herself. He apologizes for undermining her – Peter/Levi was a horrible person, and he will accept her for whoever she wants to be. Maxie tells Nathan she is happy she went on their date, when Judge Walters approaches – he advises them to get the check.

Sam tells Patrick they can share the hotel room.

Silas asks Nina what the hell is going on??

Carly tells Sonny there is no “us” if they want to protect their son. Franco is a better ally than enemy.. she opens the door to see Franco standing there!This Week Spoilers
Next Week