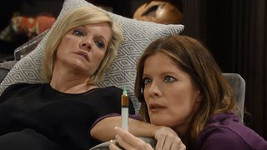 Franco calls Carly a lying cheating whore and announces she is sleeping with her ex-husband. Michael, Bobbie and Lucas are upset but Joss asks if it means she is getting back together with her dad? Franco tells them it’s Sonny – Scotty asks Bobbie if she knew and Michael is angry. Why would he destroy his wedding for one kiss?

Franco plays the tape
Franco tells him to ask Kiki, but also tells Scotty that Bobbie covered for her. She lies and STILL says she had pizza with Carly, but Franco has a videotape to show them! Lucas takes Joss and Spencer home, and Kiki tries to drag Michael out when Lucy pipes up, asking everyone to calm down. Franco says the truth needs to come out – he isn’t insecure or paranoid about Sonny.. he isn’t crazy, he has proof. He plays the recording of Sonny and Carly at Michael’s apartment for ALL to hear..

Carly wants to know how he got the recording, and he tells her it was the necklace.. “what the hell is wrong with you??”. He had no choice.. Michael asks Kiki if she knew, and Franco tells him that Kiki thought it was over between them, but Carly lied to both of them.

Nina hovers over Ava
Nina continues to torment a paralyzed Ava with the syringe that will make her give birth, but Ava reminds her Morgan is coming back. Nina informs her he is at Carly’s wedding, but Ava says he WILL be back. Nina gives her the dose and says it will take effect soon.. she needs supplies – towels, sheets, scissors – and goes to get them. Ava’s paralysis is starting to wear off and she struggles to drag herself across the floor when Nina returns.

Silas finds Madeline
At the hospital, Silas sees Ava’s text message (sent by Nina) saying she’s okay.. he gives Danny’s sample to the lab tech, asks for a rush, walks into Liesl’s office and sees Madeline. He asks if she knows where her daughter is? He tells her that her own name is on Nina’s list – Madeline confesses she DOES know where she is. She felt so bad, she agreed to help Nina..

Anna gives Duke a chance
Anna reviews the file on AJ’s murder and remembers Duke was Sonny’s alibi – she decides to call him in to talk. She says he’s there for professional reasons, and she has questions about Sonny. He gave him the alibi the night of AJ’s murder, and since Sonny is a suspect again, she is giving him a chance to change his statement. He needs to tell her the truth – was Sonny in the warehouse that night? She suggests he made a “mistake”.. and is giving him a chance to save himself. He says he has nothing to tell her and sticks to his story…  As he turns to leave, she informs him if they find any evidence implicating Sonny, he will be going down with him.

Morgan accepts Sonny’s decision
Morgan tells Sonny he has been hiding Ava at the brownstone, and she should be home now with Silas – he explains how he gave her medication to stop the contractions. Sonny needs to find Ava before the baby is born, as she killed Connie, and asks Morgan if he will try to stop him? Morgan wrestles with his feelings, but she isn’t the person he thought she was.. he understands that Sonny needs to make her pay. Sonny agrees that no harm will come to the baby, and he will deal with any problems that come up. Sonny tells Max he found Ava and they need to go get her tonight.

Jake is being discharged
Liz argues with Obrecht that Jake is not ready to be discharged, but she wants him gone. Liz says he doesn’t even have a home to go to, but Liesl points out he was well enough to make fun of her. She doesn’t have time to worry about an uninsured patient, it’s time for him to leave. He is being discharged tonight and his bill is due in ten days! He tells Liz he will figure it all out when she asks him to come home with her.

Lucy and TJ decide to leave the wedding.

Carly begs Franco
Carly asks Michael to take Kiki home, but he is angry at Franco – he actually wishes Sonny was marrying his mom. Franco taunts him that Sonny is a better person than him… but maybe he will change his mind once he finishes the rest of the ambush. Michael doesn’t want to see it, but Franco asks “what if it’s about AJ?”.. Carly begs him not to show Michael the recording, but he insists..  they hear Carly say that Sonny slept with Ava in the Quartermaine crypt. Michael asks why he would do that.. Franco says it adds insult to injury.. you would think killing AJ would be bad enough. Michael asks “what do you mean..?”

Morgan finds out it wasn’t Sonny watching Ava at the brownstone.. could it be Nina?

Ava doubles over in pain on the floor… the labor medication is starting to kick in.

Gunfire outside Sonny’s office.. Max has been shot!

Carly begs Michael to leave, Franco plays the tape – he hears Sonny say he’s the one who shot AJ.