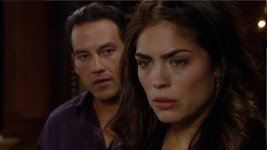 At the hospital, Liesel is furious to see Liz and Jake/Jason in the hall, but they inform her he is on his way out and coming home with Liz. Leisl mocks her for taking pity on him and has no objection so long as it doesn’t interfere with her duties. They get ready to leave the hospital together, she tells him the boys are excited to meet him! She wheels him out, and he asks to stop when he sees the photo of a young handsome Alan Quartermaine on the wall! She explains he was Jason’s father.. his face looks familiar to him. As does the picture of Edward and Lila, Alan’s parents. He remarks Lila has kind eyes. Liz thinks there might be a reason Jake/Jason recognizes the Quartermaines. She says they will find out who he is.. he strangely wants to use their last name, but will stick with “Doe”.

Britt has a visitor from the WSB
Over their morning breakfast, Britt reads that her mother might be involved in the kidnapping of Ava’s baby. Nik decides to take her back to bed, but they are interrupted by the doorbell. Special Agent Kyle Sloane introduces himself, and asks to come in.. he wants to talk about Uncle Victor! There were “off the book” projects under Victor at the WSB, and they are investigating corruption… Nikolas doesn’t need an attorney, as neither he and Alexis are in trouble. He’s actually there to see Britt! About Cesar Faison.. and what Robert and Anna did..

Duke has legal help
Alexis tells Duke testifying against Sonny is his only option, but he admits to willingly giving the alibi.. and he won’t turn on Sonny. She tells him that unless he gives up Sonny, he will go down with him – it’s the only way to save himself.

Lucy arrives at the station, wanting to see Duke – Anna wonders she hired his lawyer? She reminds Anna he is her friend, he was very supportive of her and had her back.. does Anna have a problem with that? Alexis brings Duke out, and Lucy rushes to hug him. He says he is fine, she has gone above and beyond to help her. Alexis says Duke won’t let her get out of this mess, Anna leaves them alone to talk. Duke tries to speak with Anna, but she leaves..

Carly and Sonny talk in jail
Carly and Sonny are in separate jail cells, he is shocked Scotty has had her arrested, and tells her he has lost Michael. She knows he was planning to kill Franco before the wedding, she wishes he would have done it. He thought he could control the whole situation, but was too arrogant.. and too afraid to lose what he had with Carly. She finally admits she loves him too, and she should have told him that the night before the wedding. He loves her, but sometimes love just isn’t enough. She admits much of it is her fault – she betrayed their family when she told Franco that Sonny killed AJ. She had convinced herself there was good in Franco – she is sorry she ever argued about Franco, and begged for his life. She should have listened to him. He accepts her apology – Franco needs to be put down like a dog. Carly tells him Franco helped Nina skip town with Ava’s baby..

Michael to Kiki: I don’t love you…
Michael tells Kiki he and Rosalie are having sex (again!), and tells her to close the door on her way out. She refuses to leave, and is angry at Rosalie – Michael says it’s not Rosalie’s fault she heard Morgan and Kiki keeping secrets behind her back – she has no one to blame but herself! Rosalie decides to leave, Michael asks Kiki what she is even doing there? She came there to talk to him.. he tells her never to disrespect Rosalie again! She admits he has every right to be angry, but this is his payback?? He says he doesn’t love her anymore. She says he is angry and upset, but he reminds her honesty was the most important thing to him! She lied for everyone.. she wanted to control what he knew, rather than let him make his own decisions. Why would he want to be with someone like that? She lied, and yes, it’s over..

Michael tells Kiki he will have her stuff sent over to Morgan at the brownstone. Maybe she only wants the brother she can’t have, it’s Morgan’s turn now.. he is more than welcome to her! Sobbing, she promises everything she did was because she loved him. It’s sad how quickly he can throw away everything they had!

Sonny tells Carly that Duke has been arrested, and Alexis is only going to help him.

He doesn’t know if Duke will back out of his alibi – Sonny doesn’t care if he goes to prison himself, he only cares that he will never see his son again. Michael arrives in jail to see them!

Britt thought Cesar was sent back to the super-max prison in Switzerland, but apparently Liesl was right… he never went to Steinmauer, the file suggests Robert and Anna murdered Faison! The US government won’t tolerate rogue agents, and he intends to pursue a case against Anna.. fraud, corruption and murder. He needs Britt’s help to do it!

Anna bumps into Liesl at the hospital.

Jake/Jason and Liz arrive home.. he sees photos of her family and sees a photo of her with (old) Jason!