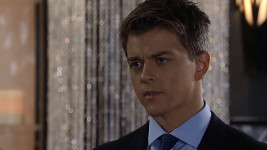 Heather shoots Max in the shoulder – “tell Sonny him Heather Webber sends his regards”. She turns and leaves. Sonny and Morgan rush to his side, and Sonny asks who shot him? Max tries to speak..

Silas and Nathan look for Nina
Madeline tells Obrecht she didn’t send Silas to Nina’s real location as he knocks on Nathan’s door. They are both looking for Nina and Silas realizes Madeline lied to him… Nathan suggests she might be in on Nina’s plan. They figure out that Madeline needs access to the money, but don’t know what she has that Nina would want.

Liesl wants to know what’s going one, Madeline says she had to divert Silas to protect Nina – Obrecht says Nina is out of control and needs to be reigned in before she hurts someone. Madeline returns her prescripton pad, Liesl notices some are missing – what has she and Nina been writing..? Madeline laughs that Liesl is worried about her name.. it was just sleeping medication, but Liesl decides to check with the pharmacy when Max is wheeled in! She says this isn’t over, follows Max and shoos Sonny and Morgan out of the hospital room.

Ava is in labor!
Ava starts to go into labor, she needs a doctor and asks for Silas or Britt. She tries to get up, but falls back in pain. Nina tells her when she was 13, she helped her mother with the delivery of a baby.. horse. She reached into the birth canal and “pulled out that beautiful new life” – it was like she GAVE life, like she saw God. She has been waiting to feel that way again.. and is ready. Is Ava ready? Nina helps her breathe, gives her ice chips and says it’s too late for drugs. It’s time – let’s birth this baby. Ava starts to push while Nina’s phone rings.. Madeline leaves her a message that Silas is looking for here. Why isn’t she picking up the phone??

Michael hears the whole truth!
Michael is stunned as he watches the tape of Sonny confessing to AJ’s murder. He asks Carly if it’s true, Franco replies “your one father killed your other father”. He says he’s no a liar, he kept his promise… Michael didn’t hear this from him. Carly approaches Michael, who yells “stay the hell away from me”. Michael yells if she KNEW he killed AJ..?? She says it’s another trick… but Franco continues to play the tape, admitting she is complicit, helping him cover so Michael would never know the truth. Everyone is stunned, while Michael STARES at Carly. Franco offers them a DVD when Scotty tells him it’s enough. Michael says this is real, not a Franco trick.. he knows she hated AJ just like Sonny did, and KNEW Sonny killed him. How long did she know?? He yells at her to stop lying.. tell him what happened.. how did she find out Sonny killed AJ..?? She admits that AJ told her.

Heather returns to deal with Shawn and Jordan
Shawn and Jordan are locked in the warehouse, and he blames her.. she asks what he and Sonny had in store for Heather that made her so afraid? He is worried he let loose a lunatic with a gun – who knows who she is going to take out? Jordan tells him that Heather almost killed her – they are lucky to be alive and apologize to each other when Heather returns. She said she had pressing business to take care and shows them the gun. She tells them she put a a bullet in Max to make a point to Sonny – he has to leave her and Franco alone. He may not get the message the first time, but will after two more. Shawn tells Heather to leave Jordan out of it, she has nothing to do with it.. she is a mom, just like Heather. He asks her not to tear Jordan’s family apart.

AJ told Carly before he died
Michael realizes AJ did NOT tell her he loved Michael before he died – he told her that Sonny shot him. He remembers how much AJ loved and respected him… too bad he can’t say the same about her and Sonny. Carly begs Michael, you know I love you so much. Franco mocks her, she tells him she is evil and will kill her. He says HE is not manipulating Michael.. it was her and Sonny. They put AJ in the ground, their real agenda was to sever any ties he had with his biological father. She and Sonny only care about themselves.. Michael says he is right. Carly admits she lied for him.. to spare him more pain. Please tell me you understand?

Ava screams as her baby in born!! It’s a girl.. Nina cradles her and says this isn’t Ava’s daughter. She lost her baby, this is HER baby.. she lots a child and got through it, so will Ava. Nina gets up to leave when Madeline arrives.. “here’s our ride”.

Liesl says Max survival is not guaranteed.. criminals of his ilk trade in bloodshed.. after a career of dealing it out, maybe someone is trying to return the favor? Sonny realizes she could be right – maybe Ava was out to get him first? Morgans says she wouldn’t do that as she truly cares about the baby. She can’t defend herself right now.

Silas and Nathan ask Liesl where Madeline is.. but informs them she has departed. She was trying to protect Nina for Nathan.. Silas asks where she is NOW.. Nathan tells her she needs help now.

Ava begs Nina to give her the baby, Nina wants to think of a name, but Madeline says they have to go. Now. Ava asks – from one mother to another – please don’t let Nina take my baby.

Heather locks the room in the warehouse behind her, she is on to more pressing matters. Franco, mother’s coming.

Michael tells Carly she lied to him over and over again. They are not his parents, his only parent is dead. He finally sees her and Sonny for what they are. He says “you are dead to me”, and leaves.

Franco turns to stare at Carly.