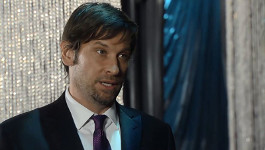 At the hospital, everyone waits for Danny’s tests.. Julian and Alexis worry his cancer is back, he offers to donate his bone marrow again. He will give anything for their grandchild and agrees to let Silas store his bone marrow, even if it means Sonny will kill him.

Danny’s test results
Silas texts Ava again while he waits for Danny’s tests, when Sam approaches asking about the tests. The two of them sit down, and he apologizes for everything that happened… he tells her he is finished with Nina. Yes, he had confirmation of everything Sam suspected and more.. the cops are now looking for her, and also mentions Kiki and Ava were on her list. He knows Nina broke them up, and asks if they can sit down and talk when this is all over?

The lab tech returns with Danny’s lab results.. the tests are negative! He’s absolutely fine. Sam hugs Silas.. Danny will be fine. It was all just a mistake.

Please don’t take my baby!
Ava tells Nina that Madeline knows her, which intrigues Nina.. Ava informs her that Madeline hired her to seduce Silas! She tells the story of how they met when she worked at a gallery, and Madeline wanted her to end Nina’s marriage. Madeline tries to convince her it isn’t true, but Ava tells Nina she just did it for money, and ended up falling hard for Silas. Madeline is the one always pulling the strings, taking things away from her. 20 years of her life.. and maybe even this baby? Nina begins to realizes she can’t trust Madeline, while Ava feeds her doubts – maybe she is setting her up. If she is locked up, Madeline will have control of the money. Ava tells her to leave the baby.

Sonny and Morgan at the hospital
At the hospital, Sonny and Morgan wonder who shot Max when Diane arrives, angry and upset that he has been shot. Kiki calls Morgan, she needs to see him, he tells her to come to the hospital. Sonny comes back to say Max is going to make it and reminds Morgan to never put himself out there for him again. Morgan asks if he is sure he has to kill Ava? Sonny can’t make him any promises, and leaves…

On the docks, Kiki is looking for Michael while Heather lurks in the shadows. She leaves a voice mail for him, saying I can’t believe what Franco did to you, while Heather points her gun. She calls Morgan, who tells her to meet him at the hospital.

Michael finds a gun
At Sonny’s, Michael sees the blood where Max fell, and picks up a gun.. “dad, you here??”. His phone rings – it’s Kiki, but he doesn’t pick it up. He flashes back to conversations with Sonny about AJ when Dante arrives and tells him Max was shot in the foyer. Dante asks if he has seen his gun? And what he is doing there..? Michael says something happened at the wedding – Franco played a recording of Carly and Sonny having sex in his apartment, and he prefers to know the truth about him now. Dante mentions they have a new suspect in AJ’s murder. It’s Sonny, which doesn’t surprise Michael.

Carly and Franco have it out
Franco tells Carly she and Sonny hurt Michael, not him. He was born to an unfaithful whore as mother, but she yells that it was HER mistake, he could have confronted her or even terrorized her. Why did Michael have to be punished for her mistake? He tells her he wants Michael to hate her as much as he does, she says she was trying to protect him. She accuses him of being evil and vicious.. Michael didn’t deserve the pain. Franco agrees, but says he is punishing her and Sonny more. She says you got what you wanted, does it give you a thrill? He explains how they kept denying things, making him feel crazy – Carly apologizes for betraying his trust, but is more sorry she ever saw him for more than an evil sociopath. Carly tells him he would have been gone months ago had it not been for her! Jason was the only reason she was ever with him – she wanted to see something good in him, but Jason was right all along. There is nothing good in him, and now it’s over. Franco laughs.. it’s so far from over!

Carly admits she cheated and lied, but Franco has no power now and she never has to see him again. She makes a sweeping exit in her wedding gown.. and tries to catch her breath outside when someone comes up behind her. “Going fishing?”.. it’s Heather with a gun pointed at her back! She tells her Franco came to visit her at Fern Cliff.. she was never good enough for him. Her son offered her an olive branch – a chance to take a shot at Carly!

Bobbie tells Franco to leave Carly alone – he leaves the key on the table for Scotty as evidence.

Heather tells Carly that she is the only one Franco can trust… and says Franco really IS crazy. “Yes Carly, I really am”..

Scotty is thrilled he has a recording of Sonny admitting he killed AJ – he tells Bobbie he is going to prison and starts to call the police. She stops him and says Carly is on the recording as an accessory – don’t do this to my daughter.. or to me.

Dante tells Michael he shouldn’t take things into his own hands, when he gets a call from Scotty. Micheal tells him to go find who is responsible for Max’s shooting – Dante tells him he will get justice for AJ. Michael mutters “I know I will”.

Now alone, Ava screams “Nina, come back with my baby”. She crawls to the front door and comes face to face with Sonny!

Kiki tells Morgan that Michael knows everything, but she doesn’t know what he is going to do.

Dante arrives at the Haunted Star and Scotty tells him he has a recording of Sonny admitting he murdered Michael’s father.

Heather asks Franco what can she do.. finally kill Carly?

Michael smashes the photo of him and Sonny, and leaves..