General Hospital on 11/7/2014 – Sonny admits all to Michael, Duke is arrested, Silas & Kiki find Ava, where is Michael? 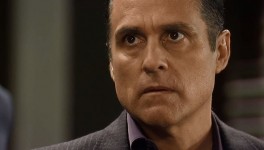 At the Floating Rib, Anna announces she is there to arrest Duke as he lied to the police (and her) about his alibi. For perjury, obstruction of justice and being an accessory after the fact in AJ’s murder. She cuffs him, reads him his rights and takes him to the station.

Lucy is worried about Duke
Lucy thinks it’s horrible that Anna arrested Duke – Bobbie is more concerned about Carly, but Lucy says Carly covered up AJ’s murder. She admits she wasn’t close to AJ, but she should expect to be punished. Bobbie says the same goes for “your boyfriend, Duke”. Bobbie has noticed she is hanging all over him since Scotty chose her. Lucy angrily says she doesn’t have to listen to this anymore and leaves. She hopes Bobbie has fun sifting through the rubble that is Carly’s latest disaster

Duke at the station
Anna faces Duke in the station.. isn’t this a fine mess? She tells him he could have avoided everything by telling her the truth. He regrets to having lied to her, but there is nothing he can do. She wants to know why he chose Sonny over her. He said he made the only choice he could, he gave it careful consideration.. Sonny made him feel useful in this world! Sonny understood the depth of hatred he has for Julian Jerome. He had the means to help him rid this town of the scum. Together, he and Sonny could bring down Julian Jerome.. Anna doesn’t understand why he would keep up the charade? He admits he wasn’t going to sacrifice Sonny’s freedom for his own. Anna says she hopes he ready to face the consequences.

Michael confronts Sonny
Michael arrives at the brownstone and fires a shot in the air – he points his gun at him, and tells Sonny that Franco showed him admit to killing his father. He tells him about the camera in Carly’s necklace – Sonny killed AJ and Carly helped cover it up. Ava pipes up saying she saw him do it, and he wants her dead to keep her quiet.. she asks Michael to help her leave! She has to find her baby.. Nina Clay and her mother took her daughter. Sonny keeps his gun pointed on her, and she tells Michael he should kill him for what he did to his father. Ava encourages him to shoot Sonny! Michael tells her to shut up – the two of them are disgusting. He tells her to get the hell out of there while he keeps the gun on Sonny!

Michael demands the truth
Michael faces Sonny and asks why he went to see the Quatermaine crypt? Was it to brag to AJ that he won? Where is the honor..? He reminds Sonny he let him blame AJ’s death on Ava, an innocent woman. Sonny replies that Ava shot Olivia, killed Connie and let AJ take the fall! AJ was innocent… but yet Sonny killed him anyway? Michael demands Sonny tell him the truth.

Sonny explains what happened: AJ found out Ava killed Connie, went to confront her, and grabbed the gun away from her. He showed up to see AJ choking Ava – he was going to tell him something, but he shot him anyway! He pulled the trigger. Michael says he wasn’t armed, he wasn’t threatening him? You killed him because you hated him? Yes.. but Sonny says he would not have pulled the trigger if he knew AJ didn’t kill Connie. He only found out the truth months later. Michael says it makes everything worse.

On the docks, Franco looks at the gun.. Ava sees him walking away and and cries “help me”.

Nina has the baby and talks to Franco
Nina cradles the baby.. “my beautiful precious girl”, Madeline arrives with baby supplies and Nina wants to know why she deliberately wrecked her marriage to Silas? Her phone rings before Madeline can explain – it’s Franco! She asks about his wedding, tells him someone new has come into her life, and she can’t wait for him to meet her. She says it’s great to hear his voice.. he tells her he could really use a friend right now. “Me too”, says Nina.. and they hang up.

Nina asks Madeline if she hired Ava to wreck her marriage to Silas? Madeline dodges the question, she doesn’t see the point.. Nina reminds her she controls all the money and wants the truth or she won’t see a dime. Madeline says yes, she wanted her to see what kind of man he was. She did her a favor! Nina finally sees her marriage would have been fine had Madeline not intervened. But it doesn’t matter anymore, now that she has Silas’ baby.

Dante has to arrest Sonny!
At the station, Dante tells Nathan he has to go to the hospital and arrest his father for AJ’s murder. It’s his job and he needs to handle it – Nathan tells him he has to find his mother, and they wish each other luck.

Dante arrives at the hospital and asks Morgan if he has seen Sonny.. it’s about who shot AJ. They talk about Michael, and Dante realizes he was at Sonny’s house looking for him. He remembers the gun and worries that Michael is filled with rage – he asks Morgan where Sonny is right now?

Kiki and Silas worry about Ava
At the hospital, Kiki is angry at Morgan for telling Sonny where she is. She runs into Silas and tells him Ava isn’t with Morgan.. he shows her the text, but Kiki doesn’t think it was from her – Silas figures out it was from Nina! They rush to the brownstone, but find Ava lying on the ground on the docks! Silas says she will be ok, but where is the baby? She tells them Nina and Madeline took her baby girl. Silas quickly calls Nathan – he knows where Nina has been!

Franco offers Bobbie a drink
Franco arrives at The Floating Rib, and offers to buy Bobbie a drink! She refuses to accept after what he did to Carly and Michael – Bobbie tells him she made a mistake.. she cheated on him. It’s happened before to better men, but Carly didn’t deserve the ambush. He thinks Michael should thank him, and thinks a lawyer is a waste of money.

Nina cradles her angel from heaven and never has to think of Ava Jerome again – she is giving Silas a daughter.

Michael tells Sonny he can’t forget how he let him comfort him over the loss of AJ, and yells “you’re not my father, AJ was my father”. All those years, he and Carly poisoned him against AJ – he was just a pawn, and it cost him his whole life with his real father.. now he will make him pay! Michael makes Sonny put the gown down.

Morgan and Dante rush to the brownstone to look for Sonny, while Ava is wheeled into the hospital. Silas tells Nathan that Nina has done something terrible.

Madeline reminds Nina this is not her and Silas’ baby, but Nina can’t wait for Silas to see her!

Franco tells Bobbie there is no lawyer in the world who can help Carly at this point.

Anna tells the guard to move Duke to the holding cell, Lucy arrives saying she will get him a lawyer.

Sonny asks Michael if he is going to shoot him? Michael says he isn’t like him – he keeps his promises – he promised AJ he would make his killer pay.. with tears streaming down his face.. “now I finally am”..