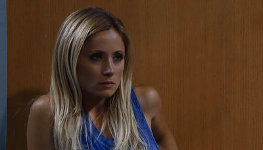 Olivia comes home while Sonny is looking after Rocco, worried about Dante and Lulu, but Sonny reminds her that Dante will fight like hell to get free. Olivia notices Rocco has been bathed and changed, and he tells her that Carly was there with him. She remarks that no matter what happens between them, their first loyalty is always to each other. He tells Olivia that Jason would want him to get Carly away from Franco..

Anna is surrounded at Crichton Clark, but they’re good guys – WSB agents sent by Robert Scorpio! She tells them Victor has to be stopped. The agents take out a guard and move forward..

Victor receives the DNA test
Nathan is shocked when Victor says he is his father, but all he cares about is finding Maxie. He asks Obrecht if it’s true.. she says yes, he IS a Cassadine. Victor says they can make up for lost time, but Nathan doesn’t want to “bond over tea and cookies with some psycho”. Victor says he isn’t aware of the family’s accomplishments, but Nathan interrupts him and wants to know where Maxie is. He suggests Victor prove he cares about him by telling him about Maxie – Victor thinks she ended up with Mr Harrell. Liesl tells him to leave while they have a chance, but Nathan walks out, looking for Maxie. Just then, the DNA test results arrive! Victor needs independent verification as she doesn’t trust Obrecht.. she says they have no time as Anna Devane is outside. He sais his people can handle Anna while he reads the results.. the DNS is NOT a match. She lied to him- he pulls out a gun and says he can’t tolerate betrayal, to say her last goodbye when Anna arrives, telling him to drop his weapon.

Dante, Lulu and Stavros
Stavros tells Dante that Lulu will be coming with him. The single shot of hormones was all she needed, and Stavros and the doctor drag Lulu out of the room! Dante punches the closed door. Anna hears Dante yelling, and finds him in the room – she has no choice but to shoot off the handcuffs, aims carefully and sets him free. They move down the hall, stepping over fallen guards.

Lulu is with Stavros and the doctor, and starts to collapse – Stavros says he gave her something to make her “a little more pliable”. He gave her hormones AND a tranquilizer, and she passes out. Stavros mutters very soon she will have their child inside him.. and will be carrying his baby. He wants the doctor to know when they can start? He decides to anesthetize Lulu himself, and when he bends down, she wakes up and bites his hand!

Peter Sr has a dagger!
Peter Sr thanks his son for bringing Maxie to him – he will have the honor of killing her himself! He has been waiting years for this moment and starts to climb out of his hospital bed – he wants to take something precious from Felicia, “an eye for an eye”. But he isn’t going to shoot her, he has a dagger instead! He melted her Aztec jewels into something new that he is going to kill her with. Peter Sr corners Maxie with the dagger, raises his arm, about to stab her.. and a shot rings out! Nathan is standing at the open door while Peter Sr collapses and falls on the floor. Nathan hugs Maxie while Peter Sr dies.. saying “avenge me”. Levi/Peter attacks Nathan!

Samtrick and their fortune cookies
Sam and Patrick wait for their Chinese food together, she tells him he can come and hang out with Danny any time. She insists on paying for dinner, says he can get it next time. They chat while enjoying their food – she tells him she and Jason got married at that Chinese restaurant. They reminisce about the past and talk about Maxie – they want her home safe! She gives him a fortune cookie, he opens it, it says he “has a secret”, and she asks what that means! He claims he doesn’t have a secret, but she jokingly grills him. Her fortune cookie says “something you lost will be found again”. Patrick jokes that it’s just random, and could mean anything.. she asks him to name something in his life that he didn’t get? He tells her a fun story about his junior prom, and they get closer on the sofa. She talks about her own story – she didn’t have a prom. He tells her at every school there was one guy waiting to ask her out who never got the chance. Patrick asks Sam what she might have lost.. she says it must be a pair of socks. and gets them another fortune cookie. Her fortune says “now is the time to try something new”.. he has the exact same fortune! He asks what it means..

Jason is restrained in a bed at Chrichton-Clark, and fights to break free. The doctor wants to sedate him, but Victor’s aide says he to be left alone..

Nathan fights with Levi/Peter, who pulls a gun on him – just as he is about to shoot “this is for my father”, Maxie stabs him in the back with the dagger.. “this is for me”…!!

Anna shoots the gun out of Victor’s hand and starts to cuff and arrest him.. but Obrecht pulls the gun on HER.

Victor’s aide enters Jason’s room – the doctor is down, and the bed is empty..

Nathan tells Maxie she saved him.. and the two share a passionate kiss!This Week Spoilers
Next Week