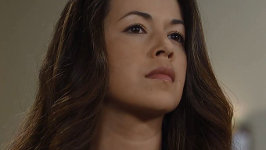 Sonny walks in while Kiki and Carly are talking about him.. “and that answers that”. Sonny asks her how Ava is doing.. tells them he is there to share the news that Dante and Lulu and safe. He tells Kiki he appreciates her discretion about he and Carly, and has accepted that she doesn’t want to hurt Franco – Kiki says she will forget so long as there is nothing else between them. Sonny reassures her and she leaves. Sonny tells Carly he is taking back Ava.. today… he will keep her somewhere safe until the baby is born. Carly offers him advice, then asks him to leave. Sonny says he will leave if Carly comes with him.. to celebrate Dante and Lulu’s return. She tells him about Franco’s party, and reminds him it is Jason’s birthday

Rosalie vs Kiki
Rosalie walks in, telling Michael she is there to check out the renovation. She notices he is alone, and asks when Morgan is coming back – she suggests he is with Kiki. Michael says he is fine with that, but Rosalie wonders how he would feel if he knew they were keeping a secret from him? She mentions overhearing Kiki thank Morgan for keeping the secret.. and pretends she doesn’t know what it is. Kiki walks in, and Michael asks what secret she is keeping from him?? Kiki asks Rosalie if she eavesdrops regularly.. and she says there IS something to it. She pretends it was about her plans for their one-year anniversary, and Rosalie ruined it now.

Sabrina’s revenge
Sabrina prays to Gabriel in church… she has already set her plan in motion. Ava will know pain like she has never felt. She took away her baby, now Sabrina will take away hers. She flashes back to how she switched prescriptions.. just enough to induce premature labor.

Shawn and Max get ready to take Ava… they do a final weapons check and wait for an opening.

Morgan visits Ava
Ava gets ready to take her medication, but stops as her guard walks in.. someone tried to get past security, it’s Morgan! She tells him she has good reason to be concerned with Sonny.. but won’t share the details why. Morgan figures out she has something over Sonny, it’s the only reason he was keeping her close. She asks if he is there to see if there is another change for them? She tells him there is no future with Sonny, and Morgan replies there is no going back for them. But he may want to go forward with the baby. He asks her to consider a paternity test, but she don’t want to risk an invasive procedure, especially after going to the hospital last night. She hopes the baby is his, but no matter what, he can be part of its life.

Nina tells Franco the truth!
Nina tells Franco she doesn’t want to hurt him.. Franco says he wishes she never told him Sonny kissed Carly as he made a fool of himself that night. He says the only person there was Bobbi.. but Nina asks what if Sonny WAS there..? She tells him Rosalie heard something, not from the Corinthos boys, but from Kiki – who didn’t want him to find out that Carly and Sonny slept together. He tells her it’s nonsense, and payback.. but Nina insists she IS telling the truth. Nina suggest he talk directly to Kiki himself.

Rosalie offers a fake apology to Kiki – she didn’t want to make any trouble, and leaves. Michael thinks she meant well, Kiki vents about her “bitch face”, and her attempt to cause trouble. Michael says nothing can come between them..

Nina tells Franco Kiki won’t lie to him, but Franco decides to NOT question her. He doesn’t want to be a victim of his own paranoia and he and Carly are doing great. He invites her to his birthday party, but she has plans with Silas, but if he needs to talk.. he leaves and slams the door, saying everything is fine.

Carly and Sonny reminisce about Jason and the memories they share. She starts to cry, he gives her a hug..

Sabrina blows out the candle for Ava’s baby… she has to do it for Gabriel.

Shawn gets the all clear message, and Ava is about to take her pill…

Rosalie barges in to see Nina and tells her she inflicted some damage on Kiki and Michael’s relationship – Kiki just told him a bald-faced lie right to his face. Nina tells Rosalie that Franco didn’t believe the news about Sonny and Carly… but deep down knows it’s true.

Kiki invites Michael to come to Franco’s party.. he agrees.

Carly tells Sonny she loves him, but they need to let it go – things are good between her and Franco. Sonny tenderly touches her face when Franco walks in!This Week Spoilers
Next Week