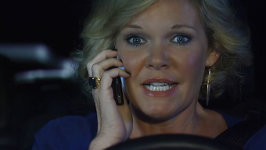 Ava gets out of her car to see Jason lying in the road. She decides to get some help, but instead of calling 911 she calls Jordan – she hit someone and it doesn’t look good. Jordan arrives, checks his pulse, and decides to tell the police SHE was driving. She tells Ava to leave and calls 911 to report the accident. Ava says she won’t forget this is the second time Jordan saved her tonight.. and leaves.

Robin tells Helena she did everything she was asked to do, but Helena won’t let her go home..  the clinics secrets could be exposed.

Robin tells Patrick and Anna her decision
Patrick informs Anna that Robin has been living in Chrichton-Clark, not Africa.. because of Jason. Anna is shocked to hear Robin was working for Victor – Patrick tells her he couldn’t risk her safety, but Jason is now dead. She is relieved as it explains Robin’s behaviour, but they now need to find out if Robin survived the explosion. Patrick calls her on Skype and she answers! Patrick tells her Anna knows everything – she says she left the clinic a few weeks ago after talking to him, is perfectly fine and in Paris! Anna says she can come home now, she doesn’t have to stay away from Port Charles. Robin says it isn’t her home anymore, all she does is make the wrong decisions.. she doesn’t trust herself. Anna reminds her she has been through an unimaginable ordeal, but Robin says she needs distance. Anna asks if she is ever coming back? Patrick tells her Emma needs her, but she asks them to trust her – her own confusion would only hurt Emma, who needs safety and support. All she can do is stay away while Patrick and Anna give Emma everything she needs.

Back at Anna’s, the two guards arrive and tell Helena that Jason escaped from the car. She asks for a gun and shoots one of them! Helena tells the other guard to dispose of the body.

Kiki and Morgan have another secret
Kiki comes home and tells Morgan asks about Franco’s party.. and that he knows Carly and Sonny slept together, because of Rosalie. She couldn’t lie to his face and he deserves to know the truth – and he did something crazy, he proposed. Kiki tells hims Carly is in the dark about Franco knowing she cheated. Morgan is worried he will retaliate, but Kiki doesn’t want him to tell her.. let them be happy together. He agrees not to say anything, but is doing it for Kiki. He wants to bring Michael into the loop, but she  thinks he will be upset that she confided in Morgan, instead of him. They agree to not tell Michael, when he walks in.

Franco suggests a Halloween wedding!
Franco asks Carly if she’s happy with their engagement? He notices she was hesitant, she says she was just caught off-guard. He’s happy to have her all to himself, now he can tell her he knows all about her and Sonny! He says he saw them together before the party, but she explains it was to share news about Dante, and also Jason’s birthday. She doesn’t want them to have any secrets.. he asks if there is anything she wants to tell him? She says no, he replies all that’s left to do is set the date. He wants to get married next month, why would they wait? She says okay, and he suggests Halloween! She says it doesn’t scream wedding day, but Franco insists it’s perfect for them – they were both pretending to be with other people, when he came to her house. They flash back to their first passionate kiss. He wants to celebrate the day it began..

Sonny hears the news about Carly and Ava
Michael visits Sonny, who asks if he had a good time at the party? Michael tells him Franco proposed to Carly… Sonny is shocked to hear that Carly said yes… “son of a bitch”. Michael would prefer him with Carly over Franco, to see his parents back together. Shawn arrives to tell him they have a problem… they had Ava until Jordan showed up. Shawn admits he screwed up, but he couldn’t hurt Jordan and TJ.

Robin tells them she has signed the divorce papers.. and please tell my daughter how much I love her. Patrick is stunned.

Kiki tells Michael they were talking about the renovation. Morgan says Carly’s decision is a bad one, but Michael says he wants to focus on his own life.

Shawn tells Sonny he will find Ava, and hears that Carly got engaged to Franco.

Carly likes the idea of getting married on Halloween.. “trick or treat”. Franco says it will be day to remember.

Ava arrived at Morgan’s front door.. “you have to help me”.

Anna tells Patrick it seems Helena’s body was found at Chrichton-Clark.. he muses that Robin is like a different person.

Robin is in the car with Helena, who says they are on their way to Paris to mail her divorce papers, but Jason managed to escape. Robin says he might be coming after her – Helena will deal with Mr Morgan when the time comes.

The ambulance is taking Jason to General Hospital!This Week Spoilers
Next Week