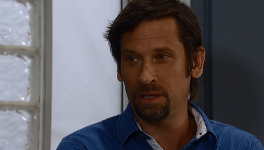 Dante, Lulu and Tracy talk about Luke and Julian, and wonder what’s going on… Tracy remembers he bought a painting from the Jerome gallery, which Dante reminds her is being used as a front. Tracy is shocked at the idea that Luke might be a crime boss! Dante says they need to talk to Luke, something is wrong.. he tells Tracy they need answers. Tracy leaves a message for Fluke – she needs to talk to him in person about the reason Dante has been asking so many questions. Dante and Lulu thank her.

Sam and Patrick need answers
Patrick and Sam think Luke is Julian’s boss, but need to prove it. They think Spencer would have recognized Julian’s voice, and Sam decides to go straight to the source. Patrick doesn’t think Sam has the kind of pull, but Alexis thinks she does as he wants her back. After she leaves, Sam tells Patrick that Alexis fell hard for Julian – it must be hard for her to be in the same room with someone you’re trying hard NOT to be be attracted to? Patrick knowingly says he understands …

Alexis visits Julian
Alexis visits Julian, he asks about her hot date with Ned, and she asks if she can come in? He grabs her around the waist and asks if he was right.. she wants a bad man after all? Alexis tells Julian she wants him.. he says this is too easy. What is she really up to? It’s too sudden, he knows she is up to something. Alexis says she wants one thing.. is he working for Luke Spencer?

Jordan races to tell Shawn
Julian tells Jordan that Michael is in danger from their boss.. he thinks Kobe (the thug) went to kill him. Jordan says they need to stop him – he isn’t involved in Sonny’s business, and is also his niece’s boyfriend! Julian says they have to make difficult choices, it’s out of his hands – it’s what the boss wants. Jordan warns him this means war, and Julian suggests she go back to work. Jordan leaves and calls Shawn.. but he hangs up on her! Jordan rushes to the hospital , finds Shawn in person and tells him there is hit on Michael, probably going down right now.

Michael and Rosalie in danger!
A shirtless Michael opens the door to Rosalie, who wants to talk. She owes him an apology for causing problems between him and Kiki, telling him there was something going on behind his back. He tells her it’s okay, and she can see herself out while he changes. She opens the door to Kobe, who  wants to see Michael. Rosalie tells him he can wait outside, and asks for a name. He pushes her inside just as Michael walks in – Kobe pulls a gun! He yells he is there to put a bullet in him.. and Rosalie as well, as he can’t have any witnesses. Michael tells Kobe who he is and that Sonny will find him.. and asks who wants him dead? Who gave him the order..?

Franco gives Carly an Evil Eye necklace!
Franco flashes back to hearing that Carly and Sonny slept together, and ominously tells Carly it’s clear what he has to do. He gives her a necklace with an evil eye instead of a ring – a talisman. The person wearing it is protected from misfortune. After he leaves, there’s a knock on her door – it’s Sonny. “what the hell, Sonny?”. She tells him they have set a date for the wedding, yes, it will be on Halloween. He says he knows her, she would never want to get married on Halloween.. She asks if there is anything he wants talk about – he informs her Ava got away from Max and Shawn. He doesn’t know where she is. Carly thinks maybe it’s for the best that Ava escaped, as she can destroy their relationship with Michael by telling him Sonny shot AJ. She thinks Ava and the baby disappearing for good would make all of their problems go away.

Franco confides in Nina
At the hospital, Nina overhears Shawn and asks if he’s talking about Ava Jerome. She introduces herself, and Shawn says he was taking about someone else. Franco arrives and he apologizes for the way he spoke to her, Nina says she shouldn’t have gossiped – Franco says she was right, Sonny and Carly totally screwed him.. and each other! He tells her they are engaged. Franco tells Nina they only cheated once, but doesn’t trust her as far as he can throw her. Nina wonders why he proposed, Franco replies he just needs to be certain he can trust her… and has made sure of it.

Back the brownstone, Kiki asks what’s going on with Morgan and Ava, Morgan tells her she is there for her protection. Ava tells her Sonny wants her dead – her security has been taken out, but she escaped. Kiki doesn’t understand, and Morgan asks why he would want to kill her? Kiki decides to call Michael, but Ava stops her… she ask her to trust her, but Kik insists Michael can help.

Olivia trips over Ned in the gym, and falls on top of him! She is flustered and apologizes, but he doesn’t mind when a beautiful woman falls on top of him. They are both there for the mixed martial arts class, he was hoping Alexis would join him, but he hasn’t heard back. Ned tells Olivia he wanted to take the MMA course to learn the moves himself, while Olivia jokingly flexes her muscles!

Sam and Patrick arrive at Dante and Lulu’s, saying they need to talk… about her father!

Kobe is just about to tell Michael who ordered the hit when Shawn busts through the door with a gun!

Sonny tells Carly that Ava wants power, and will try to make their lives miserable. He will make her pat for what she’s done.