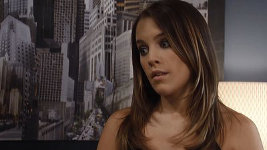 Emma acts up at home, Patrick asks her why she is upset – she wants to know why Mommy isn’t there to take her to her first day of school. Patrick tells her to be brave, but Emma says she has been missing everything. What is so important that she can’t come home – where is she? Patrick tries to call Crichton Clark, and comforts Emma, telling her that Robin is thinking about her all the time, and it hurts her not to be there. He suggests they wait for Aunt Elizabeth and Cam to arrive, then go for chocolate chip pancakes.

Liz arrives and Patrick announces he is taking them to Kelly’s before school. He quietly talks to Liz, and Emma overhears her ask him if he knows who put Rafe up to the accident – why would they target Patrick and his family? Emma is bothered by what she heard.

Silas and Sam talk Chrichton Clark
Sam sees Silas give a patient good news, and the two share a look. She tells him she hasn’t been able to trace the last number Rafe called before the accident, and they have hit a dead end for now. Silas shows her the business card from Crichton Clark, and he is surprised that Patrick didn’t tell her about it. Silas isn’t sure how Patrick even knew about the clinic and Sam confesses they went together to investigate Nina. He is angry, and she tells him just because she didn’t find anything, it doesn’t mean Nina isn’t keeping something from him.

Nina’s new plan for Rosalie
In the art therapy studio, Nina recalls her argument with Franco when he asked if she wants to be tied to Silas for the rest of her life. Rosalie asks about Franco, her “new boyfriend” – she says he is just a friend… or was until he judged her feelings for Silas. She wants to get back to her plan to destroy Ava Jerome and Kiki is next on her list, while Ava’s baby is “baking”. She needs to think of the worst possible thing that could happen to her.. the only thing she can take from Kiki is her boyfriend! She suggests another woman could come between them… and tells Rosalie it will be her, but Rosalie says no, she won’t seduce Michael Corinthos. She isn’t a hooker, but Nina says she gets to dictate the terms of their arrangement. Rosalie mentions she likes Morgan, there might be something there.. but Nina doesn’t care. It is happening with Michael.

Jossyln shares her true feelings
Carly is at Kelly’s, leaving a message for Kiki thanking her for not telling Franco her secret, when Franco walks in! She covers her tracks and says she was just trying to get info on Maxie and Lulu. He comforts her and gives her a kiss.. “gag me”, says Jossyln, who has just arrived with Michael! She wants to leave to go to school and rolls her eyes at Franco. He asks if they can turn a corner, and Michael says Joss has been preoccupied with something else, he knows what has been going on under their roof! He mentions Spencer hiding in Josslyn’s room, surprised no one noticed, but Franco says they kids are clever. Josslyn sees Spencer sitting outside diner, but is angry she ratted him out. He got grounded for weeks, but Joss says Cameron kept asking her, and she couldn’t resist because she is in love with him! Spencer is fuming while Joss gushes about him.. then comes with a plan. He suggests they work together to bust Emma and Cam apart.

Joss takes Cam to see her art project, and Emma tells Spencer she is scared, but not about school.

Kiki tells Morgan!
A shirtless Morgan asks Kiki what’s on her mind? She pretends her only concern is about Michael. but Morgan knows she is hiding something, and asks what it is. When he grills her, she admits she has a problem with his mother! She has mixed feelings about keeping a secret for Carly, but when he promises to keep it between them, she tells him Carly slept with Sonny! Morgan is shocked that Sonny would do it behind someone else’s back again – Kiki tells her that Carly confirmed it was a one-time thing, and if it’s really over between them, telling Franco would hurt him unnecessarily. If Michael knew, he would tell Franco, then Carly would hate her – when she asks if she can she trust him to “keep it from Michael”.. he walks in! She pretends she was hiding a painting mistake, and they leave to pick up Alice at the hospital.

At the diner, Franco is a little bothered Carly’s kids don’t like him, even Michael, after everything he has done to protect him. Carly reminds him he will never know, and Franco says at least he will always have her on his side.

Carly and Liz talk about how the kids have grown, and Carly says she will never forget what Jake did for Joss.

Franco sees Nina at the hospital, and apologizes for questioning her feelings, and can they go back to being friends? She says it’s a deal. He is right, her feelings for Silas are complicated, but she likes that her friendship with Franco is uncomplicated! It’s a respite…

Morgan runs into Rosalie at the hospital and introduces her to Michael.

Silas remembers Sam’s words that Nina is keeping something from him.

Sam runs into Patrick and asks why he didn’t tell her about going to see Silas.. and what he found out about Chrichton Clark.

Emma tells Spencer someone is after her, and they don’t know who told Rafe to run them off the road – Spencer says he thinks he knows who it is!This Week Spoilers
Next Week