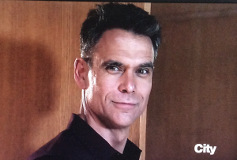 General Hospital on 9/9/2014 – Stavros is BACK, Nathan confesses his feelings, Obrecht shares info

The door opens, and Lulu says “Oh my god, no .. it can’t be”. It’s STAVROS Cassadine! He says he isn’t dead… her parents made a valiant effort by putting him in a deep freeze, but he brought himself back from the brink of death. For his ice princess. Dante tells him to stay away, Stavros laughs and says he looks impotent. Lulu spits on him, and he chuckles! He likes her feisty side.. the reason he fell in love with her, and wanted to marry her. Her resistance is part of the challenge, and will wear her down. They can be together at last.. and start a family! Lulu yells that he is INSANE. He says their child will be a Cassadine, but Lulu tells him she can’t have his child. He says she is wrong – he knows about her issues, and shows her THEIR embryo. He personally fertilized one of her eggs.

Spencer shares Luke’s threat
Spencer tells them Luke was responsible for the accident. Patrick says he is a family friend, but Spencer says it’s because of him, he knows too much. Sam and Patrick go inside to talk, they’re not sure they can take what he says seriously. They don’t think Luke would go after Emma.. but Sam says Luke has been erratic lately. He hasn’t been himself, so they decide to hear what Spencer has to say. Spencer says he knew Luke was after Uncle Sonny. He tells them he overheard him talking to a man at the stables the night of Nikolas’ engagement party. When Spencer confronted him at the Quartermaine estate, Luke told him he would hurt Emma if he told anyone. When he saw Emma on the news, he knew it was a warning from Luke. They mention talking to Anna, but Spencer freaks out. They decide to explore it on their own, while Emma is scared. It’s their little secret.

Carly and Sonny get close again
Carly stops by to see Rocco and finds Sonny holding the baby! He told Olivia to go home, to get some sleep. They share a nice moment, and Carly gets ready to leave.. he asks her to not to go. She asks him to not push it, they shouldn’t be alone together.. no one should know, especially Kiki, who almost told Michael about them. She hope Kiki understood everything that happened between them is over. Sonny asks if she believes it.. and kisses her tenderly. Rocco starts to cry, and he asks Carly to stay and help. They sit and chat – she tells him she went to see Ava about a paternity test.. she asks if Sonny is still going to go through with his plan? He has to do it for Connie, and Carly asks what’s going to happen with her baby? What will happen when they find out who the father is..? He says they will cross that bridge later.

Liesl names Victor
Obrecht thinks she knows where Nathan and the others are being held. Anna asks if she is conspiring with Levi/Peter, and Liesl admits it’s because of Victor Cassadine. Nik and Britt tell Anna she shares a history with him – Liesl says she called him,a nd he was also the one responsible for giving her the WSB file on Faison as head of the WSB. Anna and Nikolas are shocked to hear the news. Anna asks Obrecht if Victor was involved in the kidnapping? She says no, it was something he said. Britt asks if it had something to do with Nathan being his father! Obrecht says it is irrelevant… and won’t say the location until she knows what happened to Cesar. Anna says Nathan might be hurt – they need to get them out before someone gets killed. Britt asks her to please tell them what she knows..

Victor is distracted
Victor sends the DNS test out, Peter comes to his office yelling about being shot. He wants vengeance and owes Dante a bullet. Victor reminds him he works for him…and Dante and Lulu are otherwise engaged. Victor tells him Stavros has been defrosted – he is reunited with Lulu.. Victor says he may be crazy, but he is family. There aren’t many Cassadines left, but at least he can’t give him something that he wants. He has big plans for his ice princess! Levi says he is one sick bastard.. but when does he get what he wants? Victor has more pressing issues, other guests to accommodate (looking at Robin and Jason’s files!) and another person to think about.

Nathan tells Maxie..
Maxie tells Nathan she wanted to cancel the wedding because of him – Mac told her Nathan had feelings for her, which she didn’t believe. She asks if he was making it up? Nathan says he has feelings for her – since he moment he laid eyes on her. As soon as she opened the door, he was DAZZLED! He said she looked beautiful, it was her charm.. but he could see the pain, and wanted to comfort her. He felt a connection.. and then she was gone. She was there when he needed comfort, but then Levi came back and it knocked the wind out of his sails. He thought he made up that wonderful girl.. but figured she was just in pain. Levi extorted her heartache for his own gain! He says it’s not so bad being chained in the same room – it helped him get everything out in the open. But how do SHE feel about him? She tells him she kept thinking about him, and what he said. But she isn’t sure she trusts her feelings right now – she almost married Levi. She thanks him for showing up at the wedding, but she doesn’t trust her judgement. She can’t answer his question.

Sam wants to know what Patrick was going to say before they were interrupted? Patrick says it doesn’t seem as important anymore.

Victor is thinking about someone he loved and thought he could trust.. but isn’t sure anymore.

Obrecht tells them they are all at Chrichton Clark.. hurry before it’s too late.

Nathan says he will wait for an answer from Maxie, they need to focus on getting out of there… they share a longing look.

Stavros gloats over the embryo – a miracle of modern science. All that’s left is to implant it!This Week Spoilers
Next Week