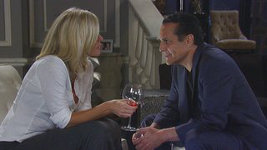 Passionate Anger
Carly wants to talk to Sonny, he figured she would come by eventually, she calls him a smug son of a bitch.. “who the hell do you think you are?”. She tells him she doesn’t want him and in the bright light of day, what happened last night will never happen again. He wonders why she came to tell him in person? She says sleeping with him was a horrible and stupid thing to do to Franco.. and he if finds out about it, he will tell Michael that Sonny killed AJ. She reminds him she loves Franco, but he won’t let her leave.. he yells that Franco is a fool, a psychopath and slimeball, and she doesn’t want to admit it. The two share another passionate embrace, but Carly breaks away before it goes too far. He reminds her there is something between them, and she is closer to getting rid of Franco. Carly is shocked that he would sleep with her just to get rid of him! He wants her to admit she made a mistake.. she’s only fighting with herself now.

Siam longing looks
Sam and Silas find a photo of them together on Rafe’s phone. The also find a number for “D”, and see that Rafe received a 20 minute phone call one hour before the accident. Silas wonders if they can trace the calls? Sam is frustrated that she doesn’t have any more information for Patrick, and when Silas questions the time she has been spending with him, she says “yeah, kinda’ like you and your wife?”. Silas admits they spend time together because they live together, but Sam reminds him she saw them kissing and asks if they are living as husband and wife? She is annoyed that he suggests her friendship with Patrick is not okay, and Silas says he is sleeping on the couch. Sam decides to leave and asks if she can take Rafe’s phone… she thanks him, and the two share a look before she closes the door.

Patrick shares his secret
Sabrina offers to help pay Sam for her work and Patrick tells her she isn’t letting him pay. She observes that Sam has been a good friend, but Patrick feels he hasn’t been a loyal friend back to her. When she questions why, he makes her promise this stays between them – Robin didn’t go to Africa, she went to help Jason! He shares the secret that there was evidence Jason was alive, and Robin went to work on the treatment, and made Patrick promise not to tell Sam.. for Jason’s sake. He explains how he ran into Robin at the clinic… but Sabrina questions why Robin hasn’t come home? He tells her Robin made a choice and he has filed for divorce! Sabrina is sorry – Patrick is at peace with it, but thinks he needs to tell Sam what he knows. He knows she still misses him, but Sabrina doesn’t think he should make Sam feel the hurt again. Just then, Sam arrives at his door! She tells them both she hasn’t found out who pushed Rafe into causing the accident.

Nina wants a baby!
Rosalie tries to calm Nina down about Ava’s pregnancy, but Nina says it isn’t fair, she’s super pissed off that Ava has two babies. Rosalie wants to know who knocked her up, Nina tells her about Sonny and Morgan.. “she was tapping two generations at one time?”. Rosalie tells her she knows one of the possible baby daddys – they met in the park and hit it off. Nina is crazy angry that Ava has been raising Kiki for twenty years.. and that was supposed to be HER baby. She got rid of Sam so she could have a life with Silas – but he hasn’t even given her a baby! She says she is a dry, old, barren woman, but Rosalie reminds her she will get everything she wants, which makes her happy. Rosalie says “assuming you can’ get pregnant”. Nina lashes out, and says she will get anything she wants! Nina says if Silas won’t give her a baby, she will find someone else who will.. she loves AND hates Silas, and there was other ways to get a baby.

Who is Fluke?
Ava tells Julian that Fluke wants her to kill Michael Corinthos and says she can’t do it because of Kiki. They need to figure out how to handle this maniac.. and Julian admits that he isn’t Luke Spencer. Luke is still being held at Miscavige, the man giving them orders is the man who took Luke’s place. Julian met him in the witness protection program, and offered him a chance to rebuild the Jerome name. It was a perfect partnership until he showed his true colors – he is a dangerous and unpredictable sociopath with ice in his veins. He says she needs to take out Michael or he might kill Kiki just to punish her. She has a choice to make.

Franco, Morgan, Michael and hospital flowers!
Franco runs into Michael and Morgan at the hospital and tells them Sonny hit on Carly – he grabbed and kissed her. but Carly pushed him away. Morgan asks if he is sure nothing would happen between them? Kiki says Sonny should respect the fact that she is with Franco, and when Franco criticizes Ava, Morgan lashes out and says he is being a hypocrite. Kiki asks what he knows about Ava that would turn her stomach? He says Carly would never cheat on him with Sonny.. and Morgan says that’s what he thought about Ava too! Franco happily takes a bouquet of flowers meant for Alice (from David Otunga and Jennifer Hudson!) as a gift for Carly..

While putting the box of Rafe’s belongings away, Silas finds a business card at the bottom… Crichton Clark!

Kiki and Michael talk about Franco, when Ava calls to invite her and Michael for dinner!This Week Spoilers
Next Week