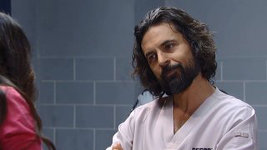 Sabrina draws her own conclusions when Carlos mentions Ava’s name – did he kill her son? He tells her to forget about this (and him), go home and live life. She angrily says she has the right to know.. did Ava kill her son? He answers yes, it was her! It had nothing to do with her or Patrick, the accident happened because of him – what would happen if he didn’t take the rap for a crime she committed. Carlos says Ava never came out and said she shot AJ, but yes, he forced him to confess. Sabrina says Ava has to pay.. but Carlos says no one can ever know what she did. Sabrina HAS to let it go, or Ava will kill her.. but she refuses to be intimidated, and is going to take her down.

Nina vs Ava – the showdown!
Ava bumps into Nina.. who tells her she knows her from the picture (“your legs wrapped around my husband, like a noose”). Nina reminds her she was her husband’s mistress, and Ava knows exactly who she is, and when she tries to leave, Nina grabs her arm saying she has waited 20 years for this conversation, to make the time! Her bodyguards intervene, and Ava says Mrs Clay is no threat.. Ava kneels down and says sarcastically “I’m sorry”.., sorry you had to find out about her and Silas in such a sordid way. Sorry he couldn’t tell her how disatisfed he was with his life with her. Ava calls it ancient history, she didn’t get Silas, but Nina reminds her she got his child! Slyly mentions they have been getting to know each other. Ava says she will never have a relationship with her daughter when Nina suggests she has one to spare! Ava tells Nina she wouldn’t be so flippant if she had a child of her own (ouch!), and Nina reminds HER that she doesn’t know who the father is.. “slut shaming”. Ava asks who told her, and is shocked to hear it’s Franco… “one of the many men that you ruined in your wake”. Nina says things are looking up as she has resumed marital relations with Silas.. and her OB says she can have a baby! She wheels away to give Silas the good news, and Ava is rattled by the exchange.

Silas shares with Kiki
Silas sees Kiki at the hospital, he tells her he chatted to Franco about Nina skipping physical therapy, and is suspicious that Franco seems to know a lot about Nina. It doesn’t sit well with him… there is something up with them. He tells Kiki he is no longer sleeping on the couch, she is surprised and asks if Nina is rebound from Sam, or is he committed to his marriage? When he tells her Nina wants a baby, she says it sounds like he feels he owes Nina, not that he loves her. He says he wants to try to salvage the marriage, and appreciates Kiki’s support. She invites them to go out with her and Michael.

The Corinthos men
Morgan and Michael stop by Sonny’s office, they ask where Carly is, and mention that no one called them about Maxie and Lulu. Michael tells them about his dinner with Ava, reminding them the baby will be part of their family; he wants to be a good uncle or brother. But he also wanted to see where Carlos shot Ava, he doesn’t want to forget what that bastard did to him. Sonny looks intently at him and says Carlos has been taken care of. He says they should be worried about Dante now.

Carly loves Franco
Carly watches Franco work in the art therapy studio, while flashing back to Sonny’s “passion, yearning and lust for life”. She tells him how fascinating it is to watch him, but he says he knows she is worried about something.. Lulu. She brings him lunch, and his next appointment is with her – she still owes him for their make-up date, but wanted to spend time with him. Admits they have hit a rough patch, but to Franco it doesn’t matter… they say “I love you” and he tells her to go be with her family. And thanks her for putting up with him.

Shots fired at the cabin!
Levi/Peter is surrounded at the cabin, and Maxie and Lulu tell him to surrender, to turn himself in before he gets hurt. Levi comes out of the cabin, holding Lulu at gunpoint! He yells that he is in charge and orders everyone to back off now.. he wants a helicopter to pick him up. He fires a shot in the air then threatens to shoot Lulu next… he wants a chopper with a single pilot, $100,000 in unmarked bills, two sets of handcuffs and some duct tape (to silence the girls!). When Dante suggests he give up one of the hostages, he says he will release Maxie when the chopper arrives, but Lulu will come with him. She has extra value where he is going! Lulu elbows Levi/Peter, and Dante shoots him in the shoulder.. he falls to the ground and the girls are free!

Dante hugs Lulu, and Maxie asks where Nathan is.. then a gas canister explodes, and they all pass out. Three men in yellow hazmat suits walk in, followed by a mysterious stranger in black! Nathan watches from outside..

Ava turns to see Franco at the hospital, says she met Nina, reminds him it’s time to get the recording, but he says he wants to live with life with Carly. She asks about Sonny, but he says Sonny is no threat. He tells her the guilt trip won’t work, to quit while she’s ahead.

Nina pops by to see Silas, tells him about her successful appointment with Britt, and there is no reason they can’t have a baby!

Kiki hears a shocker!
Carly runs into Michael and Morgan leaving Sonny’s office, and notices they are getting along now. He asks if she is ready to turn the corner with him, and she says they need to talk about that. She tells him she wants Franco now, and he can never know they slept together.. but Kiki is standing outside the door and hears it all!This Week Spoilers
Next Week