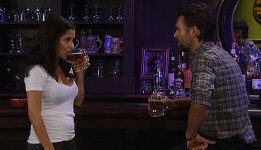 At the station, Olivia walks away, leaving Sonny and Carly alone to talk at the station… Carly pushes him away when he tries to comfort her, and doesn’t want to give Franco something to worry about, then notices he isn’t in the hall anymore. Sonny says he will be there for her when she realizes she made a mistake.

Is dinner the same as a nightcap?
Franco is shocked when Scotty says he didn’t have a nightcap with Bobbie, and drags him into the interrogation room for more information. He tells Scotty about Sonny’s kiss, and the whole story about Bobbie supposedly meeting him for a nightcap. Scotty says he DID meet her for dinner.. and tells Franco to drop it, that Sonny is a bad guy, and he shouldn’t get in the way. Franco grills him, wanting to know when Scotty made the call to Bobbie for dinner/nightcap. He demands to see his phone, when Carly walks in! Franco covers and says he was asking Scotty if he can help with the case. Scotty tells him he’s grasping at straws and leaves.

Felicia fusses over Mac in the hospital when Agent Scribner is wheeled in..Anna tells them about the shooting at the cabin and how Dante and Nathan are looking for clues.

After finding the newspaper clipping, Dante says they need to get in touch with Frisco Jones – Nathan heads to the hospital to talk to Felicia and Scribner, while Dante goes to the station to meet with Anna. He runs into Olivia and Sonny, and is frustrated, but Olivia says he needs to go home, see his son and get some rest. Sonny remains at the station and they leave.

Looking for Frisco
Felicia tells Anna and Nathan she tried to get in touch with Frisco when Maxie was kidnapped.. Mac looks concerned while they talke about the WSB, something is definitely on his mind! Anna reports that her clearance doesn’t allow her access to information on Frisco.. there have been some puzzling changes at the WSB lately. Mac announces he knows what happened to the girls – Frisco might be behind the whole thing! Felicia thinks it isn’t possible, but Mac reminds him of their history – she thinks it’s beneath him to even suggest it.

Nina tells Silas what she wants
Nina arrives home without Rosalie, who has the night off. Silas shows her the Chrichton Clark business card and asks if it belongs to her? She thinks it might belong to Rosalie, but Silas isn’t convinced and asks where Rafe would get $500. Silas remembers his conversation with Rafe, and how he didn’t give him $400.. so where did he get it from? He asks if Nina gave him the money. She says of course she didn’t – her mother froze all her financial assets. She wants to know where the accusations are coming from, and suspects it’s coming from Sam.. but Silas says he’s just trying to make sense of everything, She says she hopes he gets what he wants, because you want the people you love to be happy, and says a baby would make HER happy. She tells Silas she still wants a baby – she knows he had moved on, but he says her walking up was a good thing. She desperately wants a baby, unless he has a problem with that. He asks if she can even get pregnant? She knows it’s possible she might not be able to have achild, but still wants to make love to her husband! She reminds him of their romantic past.. and how much she misses it. He says he misses it to – they were good before things got bad.

Nina knows he is still getting over Sam, and gets up to walk towards him.. she says “I’m your wife,” stands before him, whispers she wants to be with him and starts unbuttoning her top. She says take me or reject me, “I can’t live in this limbo anymore”. She leans in and starts to seduce him, he scoops her up and carries her to the bedroom!

A fun game of pool
Patrick walks into the Floating Rib, but it’s empty.. “who do you have to sleep with to get a drink around here?”, and Sam walks in. Her mom has Danny for the night, so she is taking a break, and Emma is at a sleepover. They hear about Coleman’s arrest, and wonder what happened.. over a beer she tells him she’s happy not to spend the evening alone. He asks if she wants to talk about it – she tells him she argued with Silas over Nina, and tells Patrick to remind her that SHE broke up with Silas. He said it doesn’t help, and reminds her he is married! They joke about being a couple of sad sacks, and decide to have some fun – a game of pool. They make a bet – the winner can get the loser to do one thing. Anything! The two share some fun – Patrick is about to take the last shot but Sam distracts him and ends up winning.. he asks her what she wants him to do. She looks longingly at him and says she wants him… to shave! She wants the beard gone.. right now. The next time she sees him, she wants his face to be “baby smooth”. He asks if she hustled him.. “what do you think?”.

Franco asks Sonny why he is still at the station, and when he and Carly are leaving, Franco whispers “why don’t you do the right thing and just stay the hell away from my girlfriend?”.

Dante and Olivia watch over Rocco in his crib.

A name from the past!
Anna asks Sribner why Frisco’s face is circled, he doesn’t know.. his tells them Levi Dunkleman is a fake name, his real name is Peter Harrell. The same name as Felicia’s fiance when she first met Frisco!This Week Spoilers
Next Week