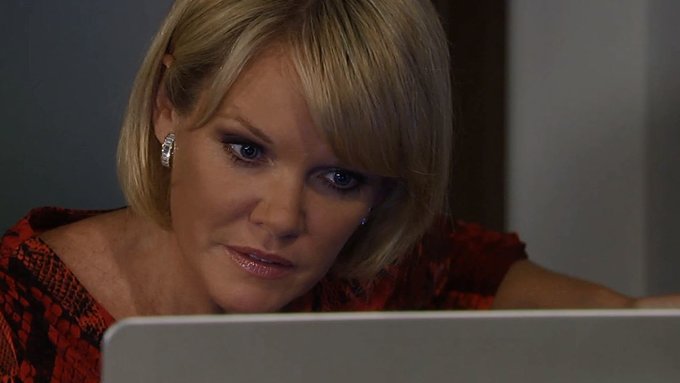 Rivals in the bedroom
Shawn and Jordan continue their passion, he has been sleeping with the enemy for 14 days, but according to Jordan, it has to be in secret, or not at all. She doesn’t want work to intrude, but he reminds her they work for rival organizations. She casually mentions she may not report to either Julian or Ava, but covers up the comment by saying she isn’t micro-managed and questions Shawn’s relationship with Sonny. They argue about the Jeromes (and their drugs) vs Sonny. He brings up Rafe and the victims of drug abuse. She tells him to leave it, he doesn’t know what he’s talking about – she won’t be working for the Jeromes forever, and will be “free as a bird”. The two get passionate again and fall back in bed.

Mother and daughter
Ava makes a wish over her birthday cupcake and tells Kiki she is pregnant! She tells her there is still an issue about the father, and isn’t sure she is up to the task again. Ava flashes back to Sonny saying he’s going to kill her after the baby is born. She feels the baby kick, and shares it with Kiki – mother and daughter get sentimental and express their love for each other!

Michael and Kiki meet at the hospital, she tells him about her visit with her mom (she was downright maternal!) and he shares the news about Tracy’s betrayal and potential sabotage. Kiki reminds him that Luke isn’t out of their lives.

Mother and son and Fluke
Michael shares the news about Tracy with Ned, they never should have believed her – the annulment was legit, but they figure she has put all her faith in Luke, but can’t see that it’s all a lie. Ned says they need to do something about Tracy before she does something else.

Tracy puts a call into Fluke to tell him their plan to take over ELQ is dead in the water. Told him about Alice’s betrayal and that she has been FIRED! Fluke is livid – “that inconsequential little twerp fired you? How can you let this happen”. Tracy gets angry at Fluke, saying he hasn’t been there, but he says he is trying to get the other board members on their side. She wants to know the reason for his extended business trip, he says the family needs to think they have split up. She wants to come up with a Plan B together, as husband and wife as she doesn’t know if she can do it by herself anymore. Fluke talks tells her to be patient, they have to stick to the plan. Ned interrupts the call and yells at him to stay away! Fluke says it isn’t over while Ned slams the computer shut. He is furious with Tracy, saying grandfather is rolling in his grave, knowing she put her power play above her concern for Alice. Tracy says she is working to protect his legacy , Ned says Luke is NOT the person she thinks he his, everyone sees him for who he is, except Tracy. He tells her she is a patsy for Luke Spencer.. pinning her against the family for his own profit and just using her. She slaps Ned and says Luke loves her “more than anybody in this rotten family has loved me”. She says they will get ELQ back, and Ned kicks her out of the house! She says Monica won’t evict her, but he reminds her that Monica will do anything to protect Michael. She asks if he would do this to his own mother, and he reminds her she did to him! He tells her to pack quickly.

Suspicious Minds
Franco wants to know who took his place for pizza and wine with Carly, convinced it was Sonny. She angrily denies it and when Bobbie walks in, Carly quickly says the wine glass is HERS, and asks Bobbie to confirm that it doesn’t belong to Sonny. Bobbie starts nattering about their girl’s night, and the two talk their way out of it. Franco almost believes it, but still wants to check the bedroom. Carly tries to stop him, but Franco pushes open the door… he is convinced Sonny is there, but the room is empty. Meanwhile, Sonny calls Carly from outside the front door, saying he went out the window, but should have stayed as Franco is a snake. Meanwhile, Franco is still convinced Carly is hiding something, but Bobbie tries to talk him out of it. She says Sonny always turns to Carly when things go badly – it’s just friendship, but Franco’s insecurity might push her TO him.

Sonny and Carly argue about Franco – she needs to make a decision about them. Doesn’t she feel the pull they have always had? She tells him goodbye.

Franco and Bobbie return from the bedroom, and Franco gives Carly a heartfelt apology… he loves her and knows he would never lose her to Sonny.

A new order from Fluke!
Ava receives a video call from Fluke, who wishes her a happy birthday! He needs information from her, specifically the dirt promised on Sonny. He suspects she is stalling, but she says she has a plan, she is working with an associate who will also gain by neutralizing Sonny. His patience is wearing thin, he wants an indication from her that all is not lost – so far she has been absolutely useless, so she asks what she can do. He asks her to kill Michael Corinthos!! “Put a bullet in him, cut his throat, drown him in acid.. use your imagination”. He tells her to get in there and accomplish the task before she starts wasting his time.This Week Spoilers
Next Week