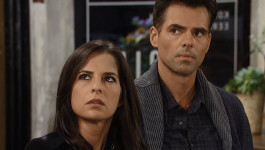 Anna isn’t happy that Liesl was released, she didn’t have enough evidence to prove murder. She saw her shoot him point blank, but there is no physical evidence to prove it – only her word. Dante asks if he can help, she says Victor is the key here – Liesl must be hiding something… but what? Dante tells him he spoke to John Doe, but he took his fingerprints. Lulu arrives to see Dante and asks if there is news on Luke..? She thinks her father will be cleared, but Anna doesn’t think so.

Nathan and Maxie at the gym
Nathan and Maxie are happy to run into each other at the gym – he came to blow off steam about his mom. She asks him about his mother, but he doesn’t want to her her in trouble with Judge Walters. She doesn’t want to leave without finding out what has upset him. Nathan tells her Liesl said she shot and killed Victor, his father. For him. Maxie says he doesn’t owe her anything – he wonders what kind of a family he comes from? What if he turns out like them? She leans on him, and says he is already a hero.. Lulu spots them and says it’s probably not a good idea. Maxie tells Nathan she will talk to Diane.. she promises not to give up and he promises to be there for her.

Obrecht sisters reunited!
Liesl and Madeline bicker at Nathan’s place, and they talk about the past. Madeline tells her she has been released and is now innocent, there was a problem with evidence, and Nina is also alive. Obrecht tells her she is Chief of Staff now.. everything is “coming up Liesl”… she tells her about Nina’s indifference about her physical therapy. She suspects Nina doesn’t need her wheelchair at all and warns Madeline that she could be dangerous. When Madeline denies it, Liesl wonders what she is holding back about Nina?

Jerry Jacks in Amsterdam
Sam, Patrick and Tracy are shocked to see Jerry Jacks walk in! He sits down with Tracy, and tells her Luke saved his life with the antidote. When Sam gets up to leave, Jerry’s thugs stop her.. he asks her and Patrick to join them. Tracy says it makes sense that Jerry is working with the Jeromes.. they helped him disappear. Tracy insists that Jerry has been behind everything – Patrick suggests they were working together, but Tracy disagrees.

John Doe (Jason) says Liz is the best thing he remembers.. she tells him about her past with Lucky, and about Jake. She mentions Jason is his father. and he died. And explains why Jake never claimed him as his son, but she kept him involved.

Nina is fully busted by Silas
Silas texts Sam, then asks the PT about Nina.. he just wants to thank him for helping Nina, now that she is out of her wheelchair. The PT says the credit goes to Nina, but Silas suggests he send the results to medical journals – while Nina is eavesdropping, he asks exactly when did she get up and walk? He closes the blinds and says no one has to know, but Nina texts him and he says 3 weeks ago. Silas grabs the phone and sees her text – he wants Travis to tell him the truth. Nina continues to text him, which makes things worse..  Silas tells him he has committed a felony, but will keep their secret if he tells him everything.

Travis confesses that Nina has been able to walk ALL along and has been paying him a lot to keep the secret. Rosalie said she has plenty of money, despite what she told him.. AND she doesn’t like him very much.

Jerry taunts Sam about Jason, and tells them he has Luke’s phone. He kidnapped him, and asks Tracy how much he is worth to him.. what is she willing to give him in exchange?

Elizabeth stares at John Doe without his bandages.This Week Spoilers
Next Week