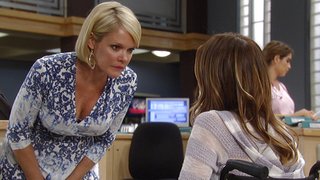 Kiki hears Carly telling Sonny that Franco can’t know they slept together but when trying to tip-toe away, Kiki almost knocks over a vase and tumbles into the room! She babbles about meeting Michael, and when she tries to leave, Carly says “you heard what Sonny and I were talking about, didn’t you?”. She claims she didn’t know what they were talking about.. Carly recognizes the sign of snooping, and says they need to have a girl-to-girl chat. Kiki admits she heard that Carly slept with Sonny, and Carly says no one can know about it – especially Franco. She pleads with Kiki not tell him – what happened with Sonny is over, it was a huge mistake, and will never happen again. Kiki says she doesn’t know if she can make that promise… Carly tries to convince her to not tell Franco, but Kiki doesn’t know if she can lie to him. Carly is starting to panic, she doesn’t want Franco to get hurt over a mistake. But Kiki leaves without making the promise.

Sabrina stands up to Ava
Ava apologies to Sabrina for bumping into her, but Sabrina gets testy.. and when Ava asks if she has a problem with her, she says yes, in fact I do! She introduces herself as Carlos’ friend Sabrina.. Carlos who is rotting in a prison cell because of her. Ava says he is there because he confessed to the murder of AJ, and she had nothing to do with that. Sabrina says Carlos wouldn’t be in prison if Carlos wasn’t tying to get away from Ava and Julian, but Ava says he is responsible for his own actions, and every choice has consequences.. Sabrina says she understands, she lost her baby! The two sit down to talk, she tells Ava about the “accident”, and says someone put Rafe up to it. She tells her Patrick has hired a P.I. and it won’t be long before they find out who is responsible.. that person will pay.. dearly. Ava says she truly hopes she will find whoever did this, and leaves.. while Patrick bumps into Sabrina.

Nina lies about a baby
Nina tells Silas there is no reason they can’t have a child – it’s not too late, they can have another baby to replace the one they lost. Silas is surprised Dr Westbourne could give her an answer so quickly. Nina is happy to be getting everything back – her husband, her home, a child. Silas says they need to talk about having a child. She tells hm she ran into Ava.. and if they’re both living in Port Charles, they will need to co-exist!

Britt asks Obrecht about Victor!
Obrecht runs into Britt at the station, wanting to have lunch with Nathan, and finds out about Maxie and Lulu and the standoff at the cabin. She wants to know what that “horrible Anna Devane” has got her son into this time. Britt tells her mother not to get involved, Nathan is a well-trained detective.. but Obrecht says Anna doesn’t care about her family. She will kill Nathan the same way she killed Britt’s father! She says Anna murdered Britt’s father as she has been unable to contact Cesar in prison.. plus Victor told her he isn’t there. He gave her a confidential file that shows Cesar was never returned, but Britt wants to know their relationship, and suspects a history between them! Obrecht says Victor carries a a torch for her.. and Britt asks if Victor is Nathan’s father?

Nathan meets Victor
Victor Cassadine is the man in black inside the cabin, while Nathan watches from outside. He removes the gas mask, and congratulates the team on a job well done. While they patch up an unconscious Levi/Peter, they recover the Aztec jewels, and Victor says it wasn’t a total loss at all. He taunts an unconscious Lulu, Maxie and Dante.. then notices Nathan isn’t there! He yells for him to show himself.. and threatens to shoot one of the “guests”, starting with Maxie. Nathan walks in with gun pointed, and Victor tells him to drop his weapon or they will shoot Maxie! He puts his gun down, and Victor introduces himself, asking how he knows Nikolas – when he says his sister Britt was engaged to Nikolas, he asks if Liesl Obrecht is his mother?? He is shocked to hear Liesl had more than one child, especially a son.. and asks who his father is!

Nina lies to Franco
Franco calls Carly, leaves a message, then runs into Nina – he tells her about Carly’s surprise romantic lunch and she gives him the great news about her and Silas (back in bed!). She says they are making up for lost time, and he tells her about his run-in with Silas the other day, and his concern for her physical therapy. She wants to know what Franco told him.. and almost confesses to Franco she can’t have a kid, but flashes back to a pregnant Ava. She will get back everything she lost, including a baby. She claims to love Silas, but Franco suspects some resentment.. Nina says she knows what she is doing, and tells him to stay out of her business!

Patrick stops by to see Silas and wants to talk about Rafe, and Silas shows hims the Chrichton Clark business card he found after Sam left. He thought it might have been Nina’s, but hasn’t had a chance to follow-up with Rosalie. Patrick asks Silas to keep him posted and Silas wishes him luck.

Patrick tells Sabrina he thinks he might know who ran them off the road.

Nathan tells Victor he doesn’t know who his father is – nor does he care. Victor continues to grill him, but then puts his gun away..

Britt asks Obrecht if Nathan is a Cassadine??

Carly is angry at Sonny, but he is confident that Kiki won’t say anything.